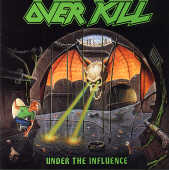 Fatal if swallowed! Blood and iron! Wrecking crew! Feel the fire! Not to mention: Rotten to the core!

I have seen the average rating of 85% (before my review) and I am surprised. Nevertheless, even though I think it is too high – both Feel The Fire and Taking Over have taken their seat at 91%. And when I look at the song titles of these masterpieces (the list could be much longer, what about 'Electro-Violence' for example?), I must admit that there is no tune on Under The Influence which meets these (or at least: my) classics on an equal footing. However, let’s start at the beginning-

'Shred' is an insipid opener with a ridiculously fast instrumental part that has not much in common with the kind of Overkill songs I appreciate. In addition, the song (and therefore the entire album) falls victim to an undifferentiated mix. All sounds thick, pulpy and pretty heavy-handed. But okay, 'Raise The Dead' was no larger-than-life opener as well, so maybe the album will reach its climax later. Indeed, things get better with the following tracks that deliver solid stuff. Overkill haven’t changed their style, at least not significantly, and 'Hello From The Gutter' sounds really cool. It scores with guitars that open the door to the song immediately and the swift verses add value to the track as well. Nevertheless, the entire A side relates to the first two records in much the same way as Germany relates to the USA. Both belong to the western world, but in my home country everything is a little smaller than in Overkill's homeland.

Don’t get me wrong. Under The Influence is not an album which deserves the label “flop”, “stinker” or “frisbee substitute”. Hopefully that at least makes my rating clear. Anyway, for me it marks the starting point of a journey into the wasteland of mediocrity with its grey cities called Necroshine or ReliXIV and the ugly place known as I Hear Black. And yes, I also do not like very much the widely appreciated The Years Of Decay. I am sorry for my lack of understanding.

Before I forget it, I guess I should lose some words about the B side. 'Drunken Wisdom' is as expressionless as 'Shred', so both openers can join hands in the no man's land of good taste. 'End Of The Line' invites the listener to sing along. Interesting to see that the little sister of 'In Union We Stand' has the same position (track no.7) as its big brother. Maybe this is a subtle indication for the predictability of the song? Apart from this, the obvious commercial intention behind this composition makes it difficult for me to like it. But 'Head First' with its excellent beginning (great bass lines, equally great guitars) marks a late highlight. Concise gang shouts characterise the mouth-opening and all-devouring chorus and the omnipresent sinister atmosphere also leaves its footsteps impressively. Thank God, 'Overkill III' fulfils the high expectations which were fed by the quality of the first two parts. A numinous beginning (and ending), speedy parts and a glorious, dark chorus leave no doubt: due to whatever reason, D.D., Blitz and the other guys preferred to show their best two songs at the end. Nevertheless, I always had and still have this not ignorable feeling of slight disappointment when listening to Under The Influence, Overkill’s first step into irrelevance.