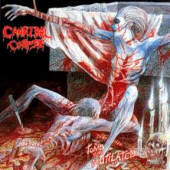 Cannibal Corpse, one of the most important and at the same time, controversial death metal bands in the world, given their explicit lyrics and album covers that probably caused some gag reflex to some people. What we have here is the masterpiece of Cannibal Corpse, an album filled with horror, necrophile and more shit. No album made by the band after this album has the horror and sick touch that Tomb Of The Mutilated had and still has to this day.

Tomb Of The Mutilated is a must-have for every brutal death metal fan, a choice you'll never regret to make. If you have money, buy it. If you don't, download it, but you must have this album, now!