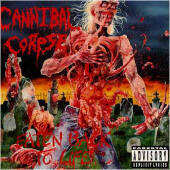 Alright ladies and gentlemen, boys and girls, serial killers and slashers of all ages; be ready because a ton of guts, bloody chunks, and rotten heads are about to fall upon you! Behold, the quintessential death metal classic driven by insanity, brutality, and gore.
Much has been said about the holy grail of the death metal albums; some claim American attempts like Death's "Scream Bloody Gore" (very ad hoc, however, close but no cigar), Morbid Angel's "Altars of Madness" (occult topics but lacks violence and the gore factor in the lyrics). Some others aim towards the old continent, for instance, Pestilence's "Consuming Impulse" or the first releases by the unholy Sweden trinity of Unleashed, Dismember and Entombed. Nevertheless, I think the one who hit the nail of the brutal, uncompromising ad relentless death metal first was Cannibal Corpse. Hailing from Buffalo, New York but quickly moved to the cradle of death metal, Tampa, Florida; Cannibal Corpse crafted an instant dissonant opus, Eaten Back to Life.

You all should know the story by now but let's go over it again just for the newbies. Eaten Back to Life is the name, 1990 is the year and the hot swamps of Tampa, Florida was the place where C.C vomited their first edible autopsy. Recorded at Morrisound Studios and produced/engineered by the king Midas of death metal, Scott Burns. The guys in C.C knew that in Tampa was the location of the rising death metal scene with legendary names such as Morbid Angel, Obituary, Deicide, and Monstrosity to name a few. So, it was a clever move to change the cold streets of Buffalo and move to the swampy inferno in Tampa. Another wise move was to record the album at Morrisound Studios, Scott Burns was on fire and knew how to treat this zombie baby and elevate the production to decent proportions. The overall sensation when listening to Eaten Back to Life is a cavernous and primitive one, however, all instruments were treated well in the final mix and you can hear them in all their brutal splendor. These guys were hungry for blood and guts, they wanted to devour the local scene as well as the world and you can tell that just by listening to the music and looking at the front cover. Vincent Locke's first disgusting and monstrous collaboration with C.C. A zombie eating his own rotten and decrepit body in an orgiastic orgy of exploiting innards with a desolated graveyard in the back (can you believe that this cover is Vincent Locke's most innocent artwork, take a look to the ones on Butchered at Birth and Tomb of the Mutilated releases).

The line-up that recorded Eaten Back to Life was: Paul Mazurkiewicz (Drums), Alex Webster (Bass), Bob Rusay (Guitar), Jack Owen (Guitar) and Chris Barnes (Vocals and Lyrics). Their machinery was pretty oiled, these guys rehearsed the songs quite well before going into the studio and mastered their instruments good enough to produce a very outstanding outcome. The music is straight to your face death metal in its most aggressive and violent form. However, during the whole album, you can taste a certain trashy influence, especially in the drumming. I think Paul was kind of rushed by the two guitar players whose speed in the riffs is insane. Jack's riffs and solos are chaotic and dissonant at their best and Rusay is an outstanding rhythmic guitarist. The rhythmic section sponsored by Alex and Paul is awesome and gives the music a certain thickness and depth that was used by Scott Burns in the mix to propel the songs into the next level of brutality. Alex's bass is chunky and very audible throughout the whole record, something that will become a trademark sound and influential for death metal bassists. Chris's vocals are deep and cavernous almost falling into the cookie monster category but with some kind of personality that few singers could achieve at the time. All together in a blender full of the most insane and gruesome lyrics ended up in the first death metal recording that took the word “death” seriously; both lyrically and musically. Chris Barnes was the one in charge of the lyrics and he took it to the extreme. I think their bandmates thought “what a heck is with this guy! Are you insane dude? You should be in a mental institution!”. The lyrics are very ad hoc to the album's concept, music, and art. Title-tracks like 'Scattered Remains, Splattered Brains', 'Rotting Head', 'Mangled' or simply 'Put Them to Death' are just some examples of the graphic violence and gruesome scenes depicted in Eaten Back to Life (of course, the name of the album as well). For instance, “Guts and blood, bones are broken as they eat your pancreas, human liver, for their dinner or maybe soup with eyes”. Pure poetry for my ears and for the ears of thousands of metalheads that fell in love with this sick band. C.C does not approach death in their lyrics in a romantical or occult way, not at all, “parental advisory, explicit lyrics” is now something that you will see in every C.C cover.

The album is very energetic and frantic, there are no slow or dummy songs a la Autopsy for instance. The foot is always full on gas and compromises with high-speed tempo tunes (maybe the reason why you can feel some trashy elements still) I don’t think there are fillers into this record, all songs seem to fit together quite well and if there are, they're killer fillers. On one hand, you have short but in your face songs like 'Put Them to Death' with the classic line “Fuck You!”, great stuff. On the other hand, some songs built a little bit more before punching you, for instance, 'Born in a Casket' and 'Buried in the Backyard'. These songs showcase a more layered and technical approach in guitars that later will become staple in albums like The Bleeding. Also, it will be criminal to forget to mention instant classics like 'A Skull Full of Maggots'. In general, the record captures a crucial moment for the band and also for the death metal scene worldwide.

All in all, Eaten Back to Life could be considered the first real extreme and gory death metal record due to its insane, gruesome lyrical and visual content as well as for its brutal musical approach. I mean, this is just my opinion, you can have your own but the evidence is beyond doubt; just go and listen to it yourself. The relentless instrumentation is all over the place, all the musicians aim to only one purpose, kill and mutilate your eardrums. Chunky and thick production with just barely traces of the trash elements, there is no doubt that in Eaten Back to Life the detachment from thrash was a fact and death metal became once for all a force to reckon.