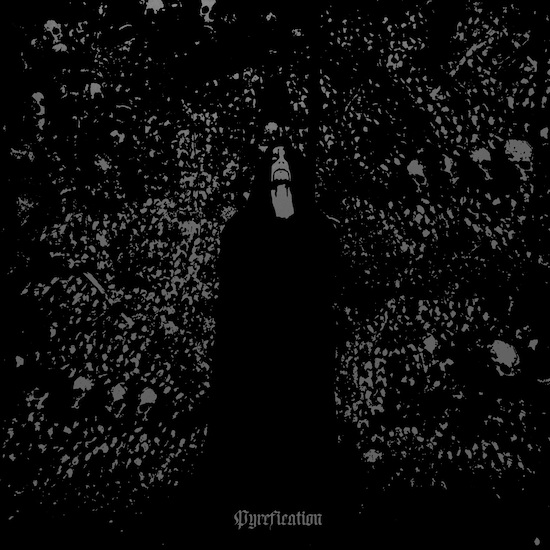 Type: Full-Length
Release Date: August 23rd, 2019
Label: Iron Bonehead Productions
Genre: Black
1 ...In The Ghostly Haze
2 Wastelands Of Plague
3 Call Of The Dead
4 A Cacophony Of Spiritual Transition
5 Grotesque Abomination
6 With Splendor Of The Night
7 Fog Of Death
8 Pyre Of The Forgotten
MetalBite on YouTube

And the candles are once again lit in arrival of Pa Vesh En's latest working of wickedness. This figure has been active since its inception having released records that have garnered high critical acclaim. It is with this second full length record the mystique behind the massive sounds of solitude and sacrilege delivers his best necromantic offering to date. Pa Vesh En cares not for the season, he performs whenever the urge bites, whenever the call from the void shakes the walls of the ossuary. Hidden from the glare of luminescence, new sessions have been put in motion to invite the listeners to waltzes with the distinguishable evil of Pa Vesh En's latest spell of intolerance, Pyrefication. It's only been a few months since we were given a peek into the warped mind of this madman, Church of Bones hit with a resounding echo in October of 2018 which was then followed up by Cryptic Rites of Necromancy that saw his songwriting skills begin to take effect as the compositions that time took the strengths of his split with Temple Moon, Church of Bones and amalgamate them, thus crafting a dreary atmosphere fused with some poignancy. Pyrefication shares the same sentiments with greater emphasis on song structure and total album flow. This entry marks a decisive step towards the maturity of the entity. Not to be mistaken, the sound and feel deeply associated with Pa Vesh En's work is still present lushfully but has undergone some modifications to magnify the appeal of the music, after-all, it still is such.

On this funerary rite, Pa Vesh En has prepared 8 combustibles serving as the apparatus to establish the pyre. 'In Ghostly Haze' conjures the air of malice we are more than familiar with by now when it comes to his sonic ability. From there, 'Wastelands of Plague' resumes the work done on Cryptic Rites of Necromancy, only this time Pa Vesh En's confidence has reached a new high. Now he seems to understand what makes his music so familiar to the genre yet diverse from so many bands. The musical textures he manages to mix is what I am referring to; as on prior releases he has exhibited a knack for melody driven compositions conspiring with the groovy, thick, clouded baselines, catchy guitar leads, raw candid drumming and his trademark overall corrupt production. Chants that sound indigenous have been added to the Pa Vesh En formula of mystique, mayhem and melancholy, further displaying transformative growth in his compositional skills. This tempest-like level of song writing continues; 'Call of the Dead' applies it's undefeated anger and hatred to the ritual, sweeping away the poignant mark of the opening invocations to execute an muscle-flexing though still haunting and abrasive installment. Appearing to be influenced by Mayhem's 'Freezing Moon' and 'Life Eternal', Pa Vesh En's 'Call of the Dead' takes the listener/s back to a time when black metal had began to take its first steps outside of it's ancient and glorious 1st wave ovum. The character on Pyrefication continues to glow with tracks such as 'Grotesque Abomination' which assembles a throne of thrashing and furious blasting snare drum structures, followed by 'Fog of Death' and 'Pyre of the Forgotten'; both of which are inscribed with dreaded cavernous growls into their husks.

Pa Vesh En's work is rather reclusive as a whole, in a sense, his discipline is ascetic or monk-like; in particular the familiarity of his sound remains committed to his projected quest even when introducing new elements in small samples. Better organization of the tracks have proven to be more effective in controlling the deluge of instruments and vocals. Austere the principles of this Belarusian figure that wanders the ancient catacombs of black metal; with Pyrefication and all prior releases campaigning somewhere between raw black metal and white noise, what you get with Pa Vesh En is more than your average raw black metal band would put forth. The strong bass driven melodies return in ensuring the record's longevity, fused with the clouded vocals of the mysterious project curator, this entry does precisely what was expected musically which is adequately sustained by a production that at this point has become synonymous with Pa Vesh En. In just over a year or so he has managed to ensconce a kingdom of dominance overlooking this sub-genre of black metal whilst rendering few capable and more-so worthy of standing amidst the shadows manoeuvred with. Pyrefication is definitely the best effort to date from this project, it's everything you loved about Cryptic Rites of Necromancy and Church of Bones cohesively dilated with a few added features to succor, nurture and intensify it's tonality.