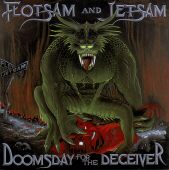 The debut of Flotsam and Jetsam has become a classic. Even the ultra-shitty artwork could not prevent its success, and this says a lot about the quality of the here presented material. The rasping guitars at the beginning of "She Took an Axe" and the immediately following, elastic riff give the starting signal for the ultimate highlight of the album. This song combines speed and melody in a very coherent manner while avoiding both too complex and too simple structures. The band varies the pace and the intensity during the entire number very skillfully and the strict riffs leave no room for any form of negligence. Even the eunuch-like screams at the end of the song do not affect its impact in a negative way. "She Took an Axe" is my personal classic of this work, but it goes without saying that a masterpiece like Doomsday for the Deceiver houses more infectious tunes. But let's make some basic comments at first.

Flotsam's debut belongs to those outputs that reflect the overdose of energy which characterized the pioneering days of speed and thrash metal. Young and healthy guys make music without seeing any sense in limiting themselves. Business plans are completely unknown, expectations of the mainstream do not play a role. The album sounds both energetic and authentic. Back in 1986, the name Flotsam and Jetsam stands for integrity and thirst for action. The output's sound is not perfect, a little bit thin and the bass does not come into its own. Yet Doomsday for the Deceiver offers songs that cannot be stopped by a slightly imperfect production. "She Took an Axe" only marks the tip of the iceberg.

Two monuments stand in the center of the album, the title track and "Metalshock". Due to my affinity for rather straight and non-opulent eruptions, they do not belong to my personal favorites. But they reflect a musicianship which is anything else but a matter of course in view of the fact that we are speaking about debutants. The single parts of the meticulously designed tracks are very competently interlinked. And, to avoid misunderstandings, I don't say that these almost dramatic pieces do not hit the mark. Both have great melodies and do not lack heaviness and power while avoid repetitive parts. Yet this album is filled to the brim with outstanding tunes and so these good songs have to face an overwhelming competition.

The trio at the beginning mirrors the less complex side of the band in a very compelling way. "Hammerhead" constitutes a natural-born opener, not only in view of its classic chords at the beginning, but also with regard to its powerful and swift drive. The following two pieces, as well as "U.L.S.W." and "Der Führer", underline the ability of the group to fire off uncompromising and compact thrashers. Okay, the lyrics of the latter are slightly irritating ("Zeig Heil" instead of "Sieg Heil" and "Holocaust, twelve million dead" - usually, historians speak of 6 million victims; anyhow, a shocking number), but this doesn't matter at all. More important is the fact that all these tracks convey the feeling of enthusiasm, joy of playing and metallic credibility. Since the Ice Age, my thesis is that all these young thrash bands stimulated each other in the pioneering days and Flotsam and Jetsam belonged to those groups that knew how to make the best of it. Compared with other great debuts of this time, it gets obvious that Flotsam had found their own sound at a very early stage. They did not copy the sharpness of Exodus, they were not interested in Satanic vibes that were spread by Possessed; the brutality of Dark Angel was not their cup of tea and they let John Cyriis alone with his aliens. Maybe Doomsday for the Deceiver can be used as the link between the slightly more aggressive first work of Testament and the marginally more melodic debut of Metal Church. This might be musically correct, but it does not justice to Flotsam's remarkable start. Doomsday... stood (and still stands) on its own feet.

The list of deficiencies is very short. The hectic staccato of "Fade to Black" fails to impress me and "Flotzilla", which is on my CD, but not on the LP version, is a rather dubious extra, because it is among these instrumentals that appear somehow half-finished. Furthermore, its position after "Der Führer" does not fit the arrangement of the tracks, because the conflagration of the anti-Hitler-song leaves nothing but scorched earth and is therefore an actually very good closer. So, what! Doomsday for the Deceiver is an essential work for every speed and thrash fan who wants to understand the spirit of the eighties - and for those who want to experience that Eric A. K. once was able to deliver some very high-pitched screams.