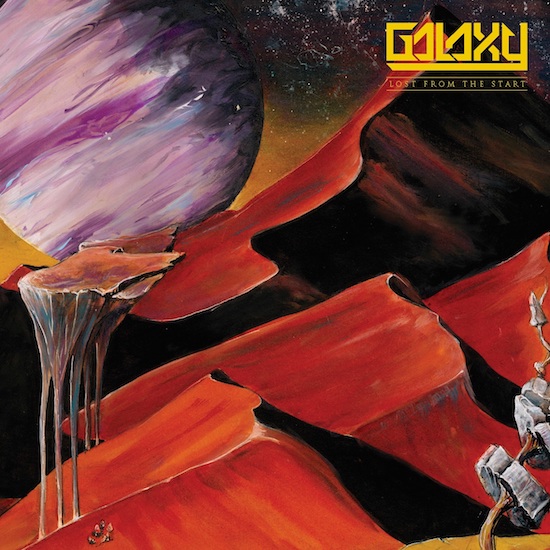 Galaxy is another new name in the scene. The dudes originate from Australia and present their debut. It's an EP and this approach reminds me of the eighties when many labels tested the impact of a new band by releasing an EP. But the format is not the only thing which pays tribute to the golden decade of heavy metal. The music itself also works as a time machine and sends the listener into a period where things like world wide web, mobiles and even refugee crisis were totally unknown. So, follow me into, well, the galaxy of Galaxy.

Names like Agent Steel, Omen or, to drop a more modern name, Portrait must be mentioned when it comes to the influences of the formation. The high pitch of the lead vocalist brings Mercyful Fate to my mind as well. Galaxy combine traditional metal with speed metal elements and the sometimes-massive reverb on the vocals create an Agent Steel-compatible atmosphere. This kind of music is not new, not groundbreaking and not trendy, but it scores with a very important feature: honesty. Dudes who play this style in the 19th year of the new millennium must be fans of their own compositions, anything else is hardly imaginable.

More details give reason for joy. The songs sound fresh, they rely on pretty mature patterns and, if we forget the overlong end of the closer, they avoid boring parts. "Dreaming Out" with its powering double bass drum at the beginning and the precise riffing makes fun, also the guy behind the microphone should not use the highest pitches that much. Either way, the newcomers show that they can pen a number with a length of more than six minutes without the slightest form of repetitiveness. Thumbs up. The lively "Sons of Titan" presses the pedal to metal without neglecting melodic elements in the chorus and with these two numbers the spectrum of the band is more or less completely covered.

Not only because of the nearly flawless production, I can recommend this EP to everyone who has an affinity for sounds that are older than her or his date of birth. Or for people like me have witnessed the pioneering times of metal. Or for people who like Speedclaw's "Beast in the Mist". The listener of Speedclaw's EP enters an old galaxy, but its stars are still sparkling. Maybe Galaxy will soon enrich the firmament of this cosmos with their light.