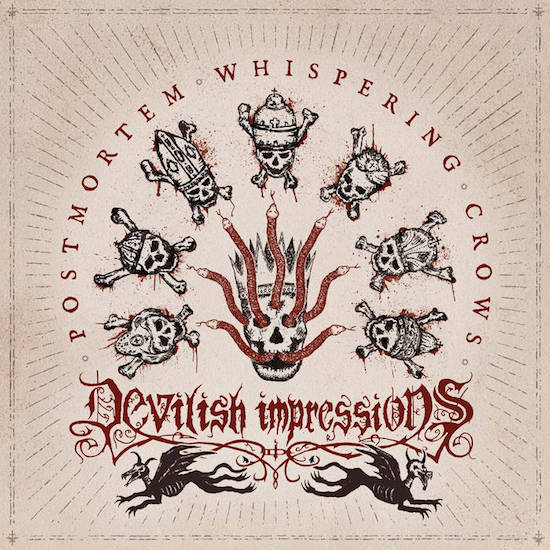 I had to refresh my memory about the background of this band as since 2017 we haven't heard from them. And this time it's not a full album, but 3-piece EP. Released under Non Serviam, Postmortem Whispering Crows.

First thing to notice is the new line-up, with only Quazarre being the original member since the band was created. But the band maintained quite the same style throughout most of their albums. It's a mixture of death and black metal, with definitely black metal harsh shrieks dominating in most songs. It's always accompanied by some keyboards and symphonic elements, but they are rarely taking over the whole atmosphere. They are quite well balanced, always being an addition, not the main part. This album is no different, we have plenty of interesting ambient sounds that enhance the grim, depressive stories told in lyrics. And while we are at this subject - the whole first track, as well as parts of two other tracks, are screamed and sang in Polish. Good effort with good result. The Polish poetry used is not the easiest, needs to be read few times and still leaves some room for your own interpretation, but generally the style is (most probably intentionally) focusing on specific symbols that are used. And this band also always reminds me of another band that used to be something different on Polish scene, playing a kind of recognizable black metal style - Cezar with his project Moon. I think that Devilish Impressions fits into quite similar position on metal scene.

The first track, "Dvma" ("Pride") is definitely the most headbanging track here. If you like the kind of tracks like "Wartheland" from Marduk or "Dominanz" from Kampfar, you will probably like it, too. It could be good to use some help from translating websites if Polish is not your native language. The solo reminded me of Hypocrisy a little, like it very much.

"Cingvlvm Diaboli" is definitely more aggressive, has some slower moments, too, but generally has more energy with some riffs reminding me of Death, very good drumming and bass here. Ending with some Polish lyrics again, with quite interesting change of main subject. Again, strongly encourage to translate them to get what I mean.

"Interregnvm" also starts on quite faster tempo, but as most of Devilish Impressions tracks, this one also has a mixture of various riffs and again solos that remind me of Hypocrisy. And again, interesting drum-work, changing together with guitar-work, which also sometimes reminds me of Mantar, especially few phrases used here.

So, generally all 3 tracks deliver a fantastic mixture of black and death metal, you can hear the established style of the band, which will be 20 years old next year. Very good that line-up changes haven't affected the overall atmosphere in their tracks, if only it added some more interesting tempos. Quite condense sample of what is going on in their ranks now, well, what WAS going on, because the line-up has changed since the album was recorded. You can read the whole story in the interview that will be available on our website soon, which in my case worked really great on my appetite for more material. I hope the full album gets out soon.