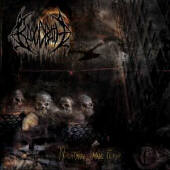 Almost 5 years ago, when a couple of guys wanted to create a band that pays tribute to old school death metal no one even dreamed that circa 2005 we’d be talking about one of the best pure death metal bands in the word, if not the best. With line up shifts and front-man changes there was as much anxiety as anticipation before release of Nightmares Made Flesh. But throw your fears away; Bloodbath came back with its strongest, most mature and best produced material to date.

Starting with production this album simply pulverizes your eardrums with its heaviness, aggression and power but at the same time staggers with its selectiveness and clarity. Flesh ripping guitars, pulsating bass and stomping drums create the feeling of mad animal tearing up your body and molesting your corpse. It’s fast, slow, very slow and then very fast, but most importantly it’s always heavy. Heavy to the point of feeling a 2-ton hammer smashing the skull and leaving your brain flowing down on the wall. New vocalist, Peter Tägtgren (Hypocrisy) who replaced Mikael Åkerfeldt (Opeth) doesn’t leave any doubts about who should spit the guts in this act, recording arguably the best vocals of his career and bolstering Nightmares Made Flesh to a blueprint status of how pure death metal should sound.

To separate themselves even more from the crowd, Bloodbath diversifies its music with subtle Katatonia like guitar leads and touch of characteristic to this part of the world melody making their sound more unique and quickly recognizable. Track after track the technically simple compositions serve one and one purpose only, to knock you down and roll over you like a tank through a battlefield. There’re no compromises and no surrender; with Nightmares Made Flesh, has Bloodbath leveled the field and declared victory? 2005 is still young but is anyone up for a challenge?

From side project to a monster, Bloodbath became the best pure death metal band in the word! Enough said.