Swedish-British death metal all stars Bloodbath have released a new album this September which is far better than its predecessor "The Arrow Of Satan Is Drawn" and brings back some very cool old school death metal vibes. I had the chance to have a very funny chat via Skype with their new guitarist Tomas Åkvik to ask some questions about the album and beyond. I hope you'll enjoy it! 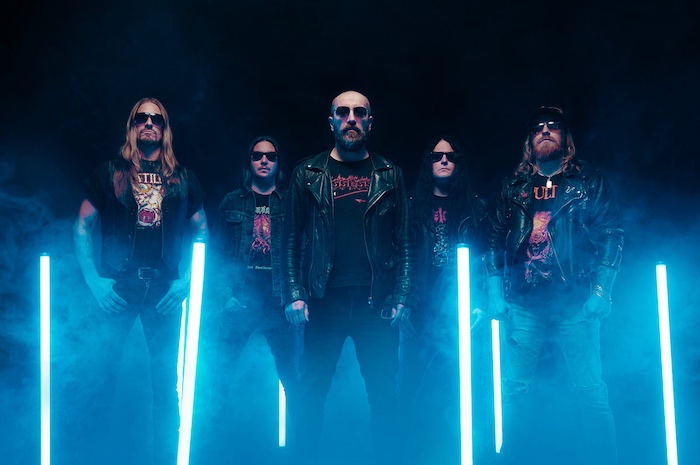 Hey Tomas, how are you doing? You are the newest member in Bloodbath – how did you get the job?

First of all, I'm fine! Thank you (laughs). Well, they asked me if I wanted to join and I said yes. The bass player from Katatonia, Niklas Sundin, is an old friend of mine – I know him for 20 years or so when Katatonia needed help, he asked me if I could do it so I did it for three years, just live shows and stuff like that and then the same thing happened with Bloodbath. Anders called me and asked if I could step in again, I did and here we are.

I have to confess that I was pretty disappointed with the last album, so it is fantastic to hear that you have recorded such a great old-school death metal album now. Did you notice that the fans weren't too happy with "An Arrow…" or why did you change the style that radically?

How would you describe Bloodbath's music to a person who only connects Abba with Sweden?

Oh…how would I describe that…It sounds like getting hit in the face with a chainsaw (laughs). You have to turn on the chainsaw and then hit somebody in the face (laughs). And it also goes quite fast, it's a fast hit.

What does death metal mean for you personally?

It means a lot. I remember when you were in your early teens and the parents thought that this would just be a phase. I'm 40 years old now and it's still not just a phase, it's something that I do a lot (laughs). I guess it means quite a lot to me. I always wanted a spiky guitar when I was a kid because I've seen the BC Rich Ironbird. My first guitar was the red one (shows me the guitar), it's a Squier Stratocaster. I got a Gibson Les Paul because I really love Slash. So when I got into more aggressive music I wanted those spiky guitars but I wasn't really allowed to get one because my parents said that I will grow out of this and I don't need one. Now I got one by myself. A couple of weeks ago I got myself a BC Rich Ironbird. I didn't grow out of this either.

The album goes pretty much back into the past of death metal. The cover looks and the riffing sounds pretty much 80s. Which records have you been digging out to write such sick and sinister riffs?

For me, my riffs mostly come from the "Covenant" album by Morbid Angel and some Autopsy. But mainly Morbid Angel, that's a really cool band and I love the first four albums.

Did you compose the album as a band or were you handicapped because of the pandemic still?

It's not because of the pandemic but in Bloodbath, Jonas is at his place, I'm at my place and Anders is at his place making tracks. For two tracks I went to Jonas' place and made them with him. But I guess it wouldn't matter if it was pandemic or not.

You have several guest appearances, namely Marc Grewe, Barney Greenway and Luc Lemay. Did they choose the tracks where to perform and did they have some chance to take part in the creation process of their song?

I'm not too involved in that, actually but I don't think that they got to choose what to do. I think they knew what they wanted with the guest performance. I guess the guest vocalists knew what they had to do when they were asked and they have their particular style of singing that we were after.

I noticed that there is almost always a fast song followed by a slower one – was this coincidental?

I'm not sure. It just felt natural when Anders introduced the tracklist to us. We listened to it and we were arguing about some of the tracks but nothing special. I think it just fitted well that way. I haven't really thought myself of it anyway but as I said, it felt natural that the tracks ended up in that way.

Can you tell me a little bit more about the production –who did it? I couldn't get any information from the press sheet about that.

Both. Bloodbath but also Lawrence Mackrory did. He produces Lik and lots of other stuff, too. It was his time and I always worked with Lawrence. He is such a great guy and I think due to the circumstances how it was recorded it turned out so great with the sound and everything.

So what were these circumstances?

Martin had recorded the drums at his place and Lawrence did all the magic with editing and fixing everything to make sure that it sounds heavy. I recorded the guitars at my little rehearsal studio and he put it all together. It's Lawrence's fault that it sounds so good (laughs).

It seems that you have watched a lot of horror movies during the writing process. Were there any favorites that you necessarily needed to write lyrics about and put it on the album?

I only wrote the lyrics for one song, 'Zombie Inferno'. I think I listened to "Zombie Ritual" by Death and I thought that was so cool and it just came out when I had that riff. And I think I read some horror books. Brian King's "Urban Gothic" was in my head but that's not a zombie thing, it's just a couple of young kids that end up in a very horrible place (laughs) and they try to get out of it. I think that's where I got the zombie stuff from because you're trapped somewhere and you cannot run away, stuff like that. And I just added the zombie thing to that like crazy murdering people as it is in the book.

Haha, the video is also very cool. This 80s trash horror stuff is fantastic! Who had the idea for that?

There is this guy, Ash (Pears; M.) and he worked together with Nick. He sent us a script about this where he told us about the intro with Nick coming out seeing all the zombies and then he enters his car and drives away, driving over zombies and shit (laughs). I think that's what the song is about. It's a very fitting video for the song (laughs) and also that 80s horror topic like Evil Dead. It's so funny – both fun and horror. That's what I like.

You've recently released a video for 'No God Before Me'– the slowest and most epic track of the album. Why did you choose that song, I guess that could be the most polarizing one on the album.

It was actually supposed to be another track but this is coming later because the video wasn't finished ('Putrefying Corpse'; M.). So we had to switch it around. But 'No God Before Me' was also supposed to be a single. With that song we just want to show the diversity of the album because we have 'Zombie Inferno' which is a fast and thrashier track, 'Carved' which is a heavy Cannibal Corpse-ish track with that riffing going on there and 'No God Before Me'. It's very diverse.

Do you have some touring plans for the future so far? A lot of bands cancel their tours these days because the pre-sale is pretty bad and the costs have increased that much…..

Well, unfortunately not. I have heard some talk about doing it in December but I don't know. All the other guys are involved in their other bands. So at the moment we don't have anything which is sad (laughs). Maybe it's because of the pandemic that makes it not happen.

Before we finish – you're also the guitarist in Lik – can you tell some news about a new album from that band yet?

Again, unfortunately not (laughs). I've done some other music that I have to get out of my system. I want to start after this month, where I have so much work to do with a lot of gigs, with some ideas that I have in my head.

Will this be some more death metal stuff or is it something totally different?

This will be something totally different.

Thank you! I hope everyone enjoys the album as much as we do because we had so much fun recording it. The music has so much energy and it is fun to listen to just like when you watch a horror movie. You don't get scared any more by death metal and I hope everybody gets that feeling that we wanted to create. Enjoy blasting it in your stereo!