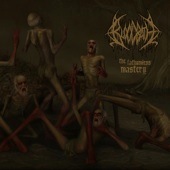 Type: Full-Length
Release Date: 2008
Label: Peaceville Records
Genre: Death
1 At The Behest Of Their Death
2 Mock The Cross
3 Lesous
4 Wretched Human Mirror
5 Treasonous
6 Devouring The Feeble
7 Hades Rising
8 Slaughtering the Will To Live
9 Earthrot
10 Process Of Disillumination
11 Drink From The Cup Of Heresy

Brutality and aggression... perfect two words that just starts to really explain what it is that the Swedish Death Metal Supergroup Bloodbath is all about. I hate the term ‘Supergroup’, but nothing else really describes the band.

Members of both Opeth and Katatonia along with the ex-21 Lucifers guitarist have been brought together, and has blasted the world with exactly what it is that Death Metal is all about. Brutal only sums up a little part of what this band has to offer... they take the Death Metal playbook, rips it all to shreds then just goes with what it raging in their collective hearts. Unabashed fury and soul searing, brain melting vehemence.

The whole thing shreds your mind and reduces you into a drooling mass of metal excitement almost as if you had a ‘sonic lobotomy’ performed on you. Songs like ‘Mock the Cross’ and ‘Hades Rising’ show maturity and explosiveness that is hard to ignore, and the lyrics are deliciously twisted and wholly demented as well.

Truthfully, the whole album just like this and more, and leaves you clamouring for more as you lay physically and mentally spent on the floor. Only the other infamous supergroup aptly called BrainDrill could ever match up with this massive wall of sheer aggression and pure metal force. Peaceville has found another good band for themselves again.

If you are wanting jolly ol’ Santa to give you the best gift for under the tree this year, tell him you want a Bloodbath. The perverted old man in red probably owns this opus of cranium melting as well... how else would he drown out the sickly sweet singing of all of those elves who slave for hi... without going postal on the little people?