I have to confess that I didn't know Theotoxin hailing from Austria before their latest release "Fragment: Totenruhe" (review here) and this might have been a big mistake. The album just blasts one away and is old-school black metal at its best. To erase the mistake I took the opportunity to do an interview with their drummer Flo and vocalist Ragnar via email to talk about the band itself and of course the new album. Check it out and have fun reading! 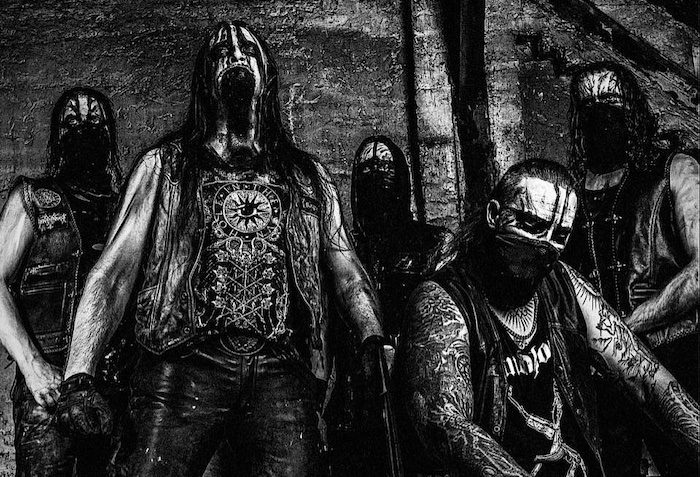 Hey, how are you doing in Austria? Thanks for taking time for the interview.

Ragnar: Thanks for having us. We are fine and currently completely on fire, because we are shortly before taking off for the European tour together with Archgoat and Whoredom Rife. Also we have just released our new album "Fragment: Totenruhe" which is a remarkable milestone for all of us.

As I said, I actually didn't know about you until I got the promo of your last album. I hope that I am not the only one who wasn't aware of your existence before. Could you introduce Theotoxin a little bit more to the readers?

F.: Theotoxin was formed by myself in the capital of morbidity and death anno 2016.

Ragnar: Theotoxin is a band, whose main purpose is, to create black metal in its purest and most frightening form.

What does your band name mean? Is it a combination of "Theology" and "Toxin"?

F.: It's a combination of "Theos" which means god in old Greek and Toxin, which is kind of self-explanatory. It's a metaphor how religion is able to poison our minds, leading to fatal decisions, as we have witnessed many times in the past.

You just released your fourth full-length album "Fragment: Totenruhe". I think it is a little bit more structured and melodic than its predecessors. Would you agree or what do you think is the most significant step in the evolution of Theotoxin?

F.: Absolutely! A big step was the path breaking moment when Ragnar joined our pack. I am very picky when it comes to musicians, but we immediately had the feeling that we share the same vision of black metal – so it was a perfect match.

Ragnar: I have joined Theotoxin at Fragment: Erhabenheit already and I think that we have made a huge progression since that time. The new output Fragment: Totenruhe shows that we have evolved musically and also in terms of production and songwriting / arranging. We are a band that is spread over a huge area, having hundreds of miles between each member, so it is even more important to share the same vision and beliefs, to be able to be on the same page when it comes to creating black metal music. If you look at the band's history, I would say that we have abandoned all influences of death metal when I joined the band in 2019 and were focusing on pure black metal from that time on. On that path the two Fragments, "Erhabenheit" and "Totenruhe" are our most significant milestones and if you compare them, I would say that "Totenruhe" is a bit more melodic and complex, without losing catchiness and roughness.

Is the term "Erhabenheit" meant in the philosophical way of Edmund Burke where he stated that sublime causes some form of pain and horror?

F.: The idea behind "Erhabenheit" has kind of a personal meaning for some of us and I am not sure if I want to give it away that easy, but you can see it as a metaphor what we wanted to create with the first Fragment, something that stands above and is special for those how want to see it that way.

Ragnar: We truly believe in what we do and think that our creations are avant-garde, driven by fire, blood and conviction, giving body to the essence of black metal itself. That's what can be seen as our mission. Erhabenheit was about rising and spreading this message. The current Fragment: Totenruhe is more focused on the end itself and can be seen as an accusation towards happenings within human society all over the world, leading as faster and faster towards the chasm.

Coming to your actual album – you have some really fatalistic titles like 'World, Burn For Us', 'Towards The Chasm' or 'Perennial Lunacy' that sound pretty apocalyptic. Do you - apart from the religious aspect – also mirroring the state of mankind these days with that? 'Catastrophe In Flesh' is a quite matching title for describing human society today...

Ragnar: Definitely. I feel the urgent need to transport (my) big visions through the songs on the Fragments, where each of them consists of certain ideas, often full of provocation or criticism and visions or missions that I have either initiated or that I am following with dedication. 'Catastrophe In Flesh's' lyrics take the locked in syndrome as a metaphor for the misled society we are all stuck in without any other chance to flee than death itself.

You did cover "Frontschwein" by Marduk on the album. Why did you decide for such a new track – I mean the song is just 7 years old - and not some older classic stuff?

Ragnar: We took that one because we personally like the song and it somehow fitted to what is going on in Europe.

The album was (just like the last one) produced by Markus Stock who also does the vocals / guitars/ bass / drums in Empyrium. Are you satisfied with the result?

F.: Markus is a good friend of ours, and we are always enjoying our time in the Klangschmiede E Studio. We have really good cooperation with him and he knows how the sound of Theotoxin has to be.

In my review I stated some Swedish influences while I read in other reviews something about Norwegian black metal. So what are the bands that have the main influence on you?

F.: I am not really sure what my influences are, I don't want to copy a band or have one particular in mind when I am writing. I prefer stuff from the 90s with its unique sound and so somehow I have this in my blood I guess, haha.

Ragnar: Personally I prefer to listen to black metal, no matter from which part of this world. Quality is the key. Of course there are a lot of bands from Norway, which I like to listen to, but I wouldn't say that it's an influence. It's more a logical thing that our music sounds how it sounds, because we are all absolute black metal maniacs. Black metal is, beside classical music, one of the most powerful music styles and it's able to transport such a huge variety of emotions within that it can be absolutely overwhelming sometimes and we all often have that feeling of goosebumps when we create certain riffs or play them in the rehearsal room the first time. It's exactly this addiction that drives us, creating this kind of music and therefore I would say: it is what it is – call us nordic influences if you want or give us any other names, we do not care and will continue to spread our message and plagues.

In November / December you are going on a European Tour with Archgoat and Whoredom Rife. What are you expecting and are you a little bit excited about this cool package?

F.: It's a killer line up and we have prepared a very brutal set for this raid and it will be vicious to spit it the people faces every night for 19 days. Whoredom Rife are also one of my favorite bands from Norway and it will be a blast.

Will we be able to get all your albums at the merch then?

F.: Yes, there will be plenty of merchandise and maybe some new designs too, who knows?!

Thank you very much for the interview and see you in Essen!

Ragnar: See you there!