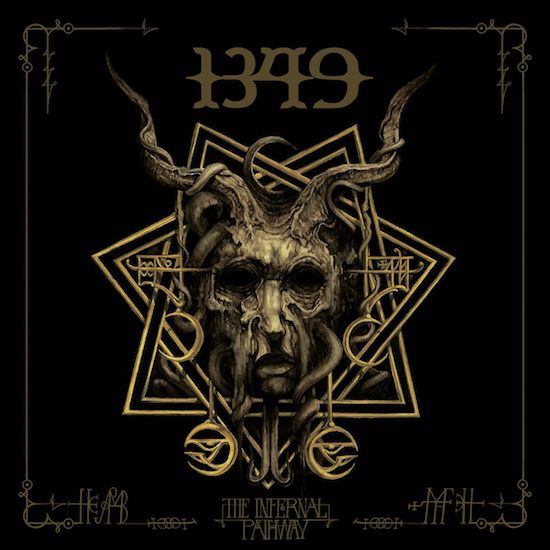 1349 built a reputation within the Norwegian black metal scene for being faster and more aggressive than the typical Norwegian band. One could even argue that they had more of a Swedish sound, incorporating death metal influences. This aggressive mix of tremolo picking, and blast beat driven black metal reached its apex in 2005 with the release of their third full length album Hellfire, still considered today as a black metal classic. After what most critics would call a failed atmospheric album in 2009 with Revelation of the Black Flame, 1349’s sound continued evolving by experimenting with various styles. Indeed, the ambient/atmospheric elements presented in 2009 where still present in their next few albums while thrash metal was progressively introduced to the mix. A good argument could indeed be done that 2019’s The Infernal Pathway is perhaps their most blackened thrash album to date. In fact, the album could be separated in three distinct sounds; blackened thrash, ambient interludes and old school black metal.

The thrash metal influences are seen in the songs 'Through Eyes of Stone', 'Towers Upon Towers', 'Striding The Chasm' and 'Abyssos Antithesis'. The ambient interludes kept the same naming convention introduced in their fourth full length album Demonoir in the form of 'Tunnel of Set VIII, IX and X'. The last third is where 1349 goes back to their pre-hellfire roots and influences from Gorgoroth to old school Immortal are present in 'Dodskamp', 'Enter Cold Void Dreaming', 'Deeper Still' and 'Stand Tall in Fire'.

To starts off with the first third of the album where thrash metal riffs dominate the album, it’s interesting to see 1349’s various influences and experimentation, but the result tends to be mediocre at best. In most thrash inspired songs, Frost’s rapid tempo changes along with the riffs showcased by Archaon makes the song feel like a whirlwind of ideas with barely any cohesion. In the thrash and punk inspired world, that could be considered an excellent thing, but the thing is most of these riffs are un-interesting and end up being repetitive through the record. In fact, the similarities in riffs between 'Striding the Chasm' and 'Abyssos Antithesis' are difficult not to notice.

The ambient third of the album is un-inspired and tend to drag out the album. Shorter interludes can be quite innovative and interesting as it allows for a mood change and a smoother transition from one blistering fast song to the next. An example of perfect execution in this area would be from the band Aklhys on their EP, "The Dreaming I". The ambient pieces blends in perfectly with the music giving the listener the impression he’s in a never-ending nightmare as the songs transition smoothly from one to the other. In 1349’s case, a very thrash inspired song in 'Through the Eyes of Stone' ends abruptly three-second before the drone ambient 'Tunnel of Set VIII' starts. As soon as this 47 second interlude finishes, another blistering fast riff kicks off the next song. This phenomenon can also be observed in 'Tunnel of Set IX' and 'Tunnel of Set X'.

The last third to the album is interesting albeit a bit stale. Archaon’s riffs are more diverse and some even have a slightly melodic tinge to them like the intro in 'Dodskamp' or the last riffs in 'Deeper Still'. Frost’s blistering fast drumming is much more interesting as more technical drum rolls are introduced. However, as mentioned before, some songs sound like a stale version of Norwegian black metal artists. The slow-paced finisher 'Stand Tall In Fire' sounds like a lost song from Gorgoroth’s "Quantos Possunt ad Satanitatem Trahunt" and some riffs in 'Enter Cold Void Dreaming' seem like they were taken from the "Battles in the North" era of Immortal.

The production and mixing are clean and makes it impossible for a listener to not notice Frost’s technical prowess on the drums. All in all, The Infernal Pathway is not a bad record nor is it particularly good. Passion is the missing ingredient as experimentation has taken center stage for 1349. Unless you are really into an experimental side of blackened thrash or are very interested in following 1349’s musical evolution, I would not strongly recommend this one.