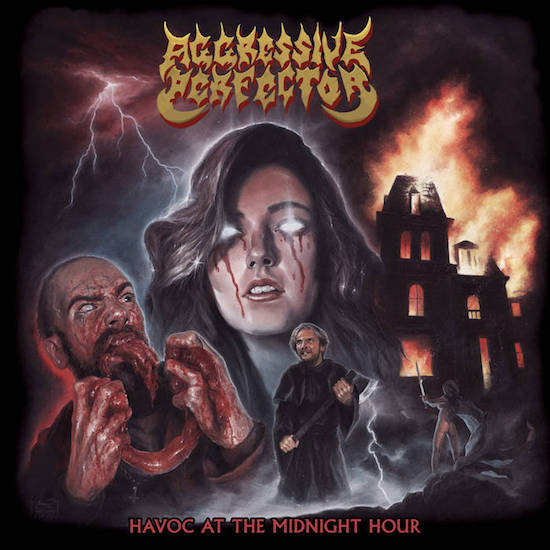 Throwback metal has its limitations, 1. it's throwback so don't be expecting anything ground breaking or out of the ordinary and 2. it’s been done by countless other bands therefore chances are you'll be content after the first listen or two if you've heard anything similar by this new-wave uprising. Hence, it’s safe to assume you already know what you'll be getting once cash leaves your hand and heads to the register. Aggressive Perfector are a part of that faction promoting old sounds, but rather than the chore-like and karaoke feel you get from other bands that make you question whether they like what they're doing, or it's all joke, the violation squad of Mr.666, Intimidator and Dan Holocausto appear animated and adamantly passionate about what they bring on Havoc at the Midnight Hour. From Venom, Slayer, Motorhead and Thin Lizzy and some punk rock, the fabric of Aggressive Perfector's music is well attired in 80s decor.

The record moves fast despite its 38-minute run-time, because it does not dwell on anything too long while borrowing from the bands mentioned, therefore active change within songs occur rapidly. 'Onward to the Cemetery' is a catchy piece to get things started in building the atmosphere and delivering the goods from the onset. 'Chains of the Black Wrath' goes all the way back to snag some Thin Lizzy and while you'll also get the occasional Tom Araya influenced scream as heard on 'Vengeful One' the album takes on a unified feel avoiding any quagmire-esque instances. The better songs are on the B side of Horror at the Midnight Hour, revealing Aggressive Perfector's strength which exists within their mid paced compositions, occurring more often on latter songs.

The guitar solos held the music together given they're many times Havoc at the Midnight Hour could have fallen to pieces. While the vocals were not the worst, they certainly were not the best; most times I could hear what sounded like fatigue causing some notes to emerge as underwhelming and nearly detrimental to the music. Bringing me back to the case of the solos and leads, they truly save the overall record by supplying considerate rhythmic sauce to the songs. The guitar solos expand the leads leading to blissful melodic passages within them, thus stealing the center stage and spotlight for those moments. They're so potent that once heard they almost erase/overwrite the lacking vocal performance for a period.

The case with Horror at the Midnight Hour is that there clearly lies potential to take the project to new heights, but there will have to be considerable improvement in the vocals area before that becomes a reality. The drumming and particularly guitaring are above average standards thus the vocals need be on the same level. Horror at the Midnight Hour is a good album still if you're indifferent about vocal effect; however, if you're not that forgiving then you'll have to focus on guitar work to get your musical massage. Personally, I don't really mind the vocals but as stated before if the band is to really stand out for good reason, every facet of Aggressive Perfector's music needs to be above standard. Definitely worthy of a few spins for anyone in love with the mystique of the 80s Horror at the Midnight Hour achieves.

Artworks are not the main thing in terms of heavy metal, but the one of Aggressive Perfector's debut deserves attention. Have you ever seen more stereotypes bundled in only one picture? The woman without eyes and blood on her face, a slightly insane looking guy with an axe and a naked beauty with a sword have found together and nobody knows why. Lightning and a burning mansion enlighten the scene, but my favourite detail here is the bloody sausage-eating maniac with the Gene Simmons tongue. Freely speaking, I have no idea what the British combo wants to say us with this cover.

The music itself is more or less generic heavy metal that intends to build a bridge to the past. Aggressive Perfector want to summon the ghosts of some old heroes, Tank, Venom, Slayer and Mercyful Fate, that's at least what the promo tells us. But do not jump to conclusion, the newcomers do not sound like these famous bands and to unite elements of these four pretty different combos would lead to a rather weird result. Mid-paced metal is on the agenda and so everything depends on the riffs. By the way, the opening riff of "Land of no Return" is not borrowed by one of the aforementioned godlike units, but by Bathory's "13 Candles". Apart from this evident audacity, this is the first track that spreads some Danish vibes. It could also work on an album with King Diamond, but the vocals of the lead vocalist remain on a much more normal level. Nevertheless, he conveys a certain charisma.

Punk influences or a rebellious attitude do not occur here, and this is why I do not understand that the promo mentions Tank. The rather simple patterns of Brabbs/Brabbs/Ward do not show up. Aggressive Perfector give us more complex songs, heavyweight structures instead of lean punk patterns, without drifting into technical arrogance. It's clear to see that they want to create a typical metal mood, a kind of guitar driven horror show that has nothing in common with the pure guitar power and the resistant attitude that Tank preferred.

Slayer might have been an inspiration for the dudes and their band name points into this direction. Yet this is not to say that they sound like Araya's once glorious thrash machine. Okay, the quite strong speed metal piece "Vengeful One" starts with an "Evil Has no Boundaries"-compatible cry, but this is almost the only parallel between this album and the works of Slayer, if at all. More important is probably that the trio from the UK has courage, passion and energy. Their songs sound vibrant and powerful. Maybe they sit between a rock and a hard place, because their style has many facets, a lot of traditional metal, speedy elements and some guitar gimmicks. Nonetheless, bands such as Portrait are not too far away from Aggressive Perfector and the Swedish gang provides evidence that it is possible to be successful with this way of proceeding. Aggressive Perfector also manage the challenge in a good manner. The casual yet efficient riffing of "Turbo Evil" is exciting, although the song slightly derails at the end. The instrumental intro of "Into the Nightmare" brings the traditional spirit into the modern times. Indeed, one finds some promising details here, but the band hasn't penned a real hit so far - and the fact that the album sounds slightly inorganic and overloaded does not make things better. Nevertheless, people who love Priest's "Defenders of the Faith" or the works of the Finnish speedsters called Ranger will probably like the album. Or, to be more precise, the album minus the artwork.