If you like speed, thrash and heavy metal, Aggressive Perfector has a horror themed bundle of all three ghouls set to emerge from the grave November 22nd, 2019 through Dying Victims Productions. 8 songs drenched in 80s horror and occult themes meet the ears of the listeners, while paying tribute to some of the era's idols, Motorhead, Slayer and Venom just to name a few. Fast and aggressive songs loaded with catchy licks and a punk metal edge, "Havoc at the Midnight Hour" is Aggressive Perfector's ringing of the underground chapel bells. 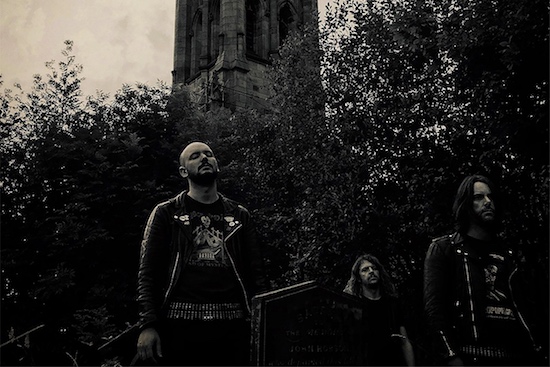 How did Aggressive Perfector come to be?

It was a meeting of minds between myself and Tim around 2013, with the addition of Mike, it became Aggressive Perfector with the mission to create a vicious hybrid of heavy metal sickness, and punk fury.

How do you see yourselves fairing in this modern heavy metal age?

I think pretty good, we just do what we do, which is to write killer heavy metal songs, and to put on a savage life show.

I get the impression as a group you had fun creating  "Havoc at the Midnight Hour" (which I'm having a blast listening to) because it shows through the music; how would you describe the experience working on the record?

It was tough, as we are maniacs with the songwriting, and we want it to be the best it can be, we actually recorded the album once, and scrapped it, and did it again.

Were there any challenges encountered during the recording sessions?

Yea, the fact we recorded the album prior in Sweden, and were not happy with our performance, I think guitars and vocal lacked, the songs not fast enough, and lyrics not quite done. We beat ourselves down from time to time [laughs], but we treated it as a learning curve, and came out vicious for the next attempt.

I love the early 80's sound you were able to capture with the new record, who handled the production and did you have specific sound that you went after or was it a product of experimentation?

It was engineered/ produced by a friend called Joe Clayton, and recorded in Cheetham Hill, Manchester right behind Stangeways prison, we had a good idea of what we wanted, but in the studio, magical moments and ideas can change the course of the sound and project, so I'd say quite a bit of experimentation went on, especially with some of the keyboards. The band was at the helm for the whole mix too; we wanted to get it right.

I hear some Thin Lizzy, Venom and Motorhead in your music, particularly in the guitar tone and a few patterns, also the obvious Slayer ('Into the Nightmare' and that opening scream on 'Vengeful One') I see their music has had a great impact on yourselves as musicians. What other bands would you cite as direct influences?

As for other bands, Paradise Lost, Black Hole - the Italian doom band who created the masterpiece "Land of Mystery". Soundgarden, Carnivore, I could go on and on. Also being huge horror and sci-fi movie fans. A lot of killer soundtracks from the 70s and 80s inspire us too, the synths and keys play a big part throughout the album.

Even punk metal can be detected on the album, I'm guessing a bit of each individual's character/influences translated to the music?

So, we are massive metal fans and you're bang on about all those bands mentioned but we are not just confined to the 80s. In fact I'm no fan of hair metal, there was a lot of garbage actually from the 80s that makes me want to vomit [laughs].

The guitar leads and solos are fantastic on "Havoc at the Midnight Hour", who wrote those licks and which parts took the most takes to record and are most challenging to play live?

Leads are split between myself and Tim our drummer, as he plays guitar too, I'd say because we'd practiced them solidly beforehand, we had it nailed in time for the studio, no messing around.

What are some of the inspirations behind the music's lyrical content and awesome artwork?

So, horror movies of the 60s, 70s and 80s, play a huge part in the lyrics from good old Hammer Horror right through to the Italian masters of violence and sleaze such as Umberto Lenzi, Dario Argento, and Mario Bava etc.

I should also mention John Carpenter too. I read a lot too and I love the words of Lovecraft and William Blake, amongst many.

But some of the lyrics are born out of the surroundings and society around me in Manchester, the grime and misery you see amongst some people, the landscapes and old buildings and mills. In a rapidly changing city becoming gentrified in parts, and becoming more desolate in others. Certain songs like 'Vengeful One', 'Turbo Evil' and the 'Devil's Bastard', portrait an outcast on the edge, non compliant and out of control.

As for the artwork, we had this idea in mind to represents the title and lyrics and be a total tribute to horrors past masters, Velio Josto exceeded our expectations. Truly pleased with it.

Last word is yours. Is there anything your fans need to know and we forgot to ask?

I think we've covered it pretty well, but I would like to add, we will becoming to the mainland of Europe a few times in 2020 so keep an eye out for the blood stained steel.