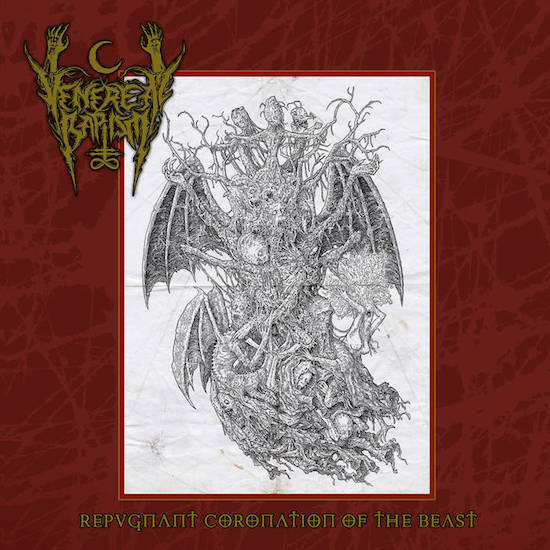 I don't think Venereal Baptism can do any wrong after hearing the single off their upcoming album Repugnant Coronation of the Beast. Ten tracks of brutally desecrating black metal prowls within the shadows and pounces viciously on anything moving within its reach. Residing right here in new age Babylon, The United States of America, Venereal Baptism have been directing sorceries and ceremonies of all kinds only since 2016 in keeping has the fire lit when sharing the domain kept active by many who appreciate black metal done the brutal way. While others place focus on mysticism and beauty, amidst the murky fields, Venereal Baptism wear the mask of the harsh, menacing and ugly face of black metal which comes as a result of death metal vocals and tons of blast beats being incorporated into the music. Instrumentally structured more within the veins of brutal death metal, Repugnant Coronation of the Beast spreads its paws to strike at the throats of both blasphemous black and brutal death metal enthusiast.

Nowadays it’s fair to assume if an American band is claiming to play black metal, there is a 90% chance the final product will be in some-ways or more, influenced by death metal. Such is the case on Repugnant Coronation of the Beast; you have ten tracks titled as though they were meant to be on a brutal death metal record; ‘To Castrate Angelic Grace’, ‘Venereal Fucking Whore’, ‘Unfuckable Pacifist Gutterslut’ and ‘Abhorrent Cesspool of Lesser Human Vessels’, all of which demonstrate heavy instrumentation matched with disgusting lyrics and scorning growls for vox. Machine-gun drumming on the snare and double bass, plus a wild showing of riffs to be found scattered flourishing throughout the record; and the production?, as cleanly scented as baby-breath. Repugnant Coronation of the Beast is contaminated with the fluids of death metal from beginning to end; traces of black metal can still be heard on some moments that feature the buzz-saw riffing leads and rapid gun-fire-esque drumming.

Songs don’t overstay their welcome, they’re mostly around the range of 4-5 minutes of pelting fury so getting through this 45-minute session of musical transgression is easy and even calls for a second and third listen. Many bands like to bombard you about how ‘brutal’ and fast they play, but never seem to make any suggestions regarding song structure or flow and variation, thinking the obvious fronts are all that matter. I’ve had the displeasure of seeing this occurrence one too many times, particularly in the brutal death metal genre, hence I avoid most acts attached to it. Thus, it's apparent that bands more conscious about their quality of music venture outside for elements that would serve as welcome addendums to their lyrical philosophy, given no harm is done to the primary identity of the genre. I think Venereal Baptism fall safely within that category of self-awareness, particularly in an era in which sees un-inspiration and blatant copying become the norm. They borrow influences and create music filled with compassion and merit; definitely a ‘labor of love’ or in this case hate.

Songs here are rooted in adversarial ideologies to the current time, and there's more than enough to appeal to the Christ-hating and desecrating hordes of metal-heads. You'll also be a bit surprised to see the many foul implications made towards those who are under the spell of the foolish societal spectrum, thus advancing the material from the ethereal to the tangible world. Yes, these guys hate them too, and are not intimidated to voice their disdain as heard primarily on 'Unfuckable Pacifist Gutterslut'. Their contempt shows uninterruptedly, and they seem to have brought the solution with them. Fists are clenched and up in war mode, with no rest whatsoever being given to the enemy until eradication.