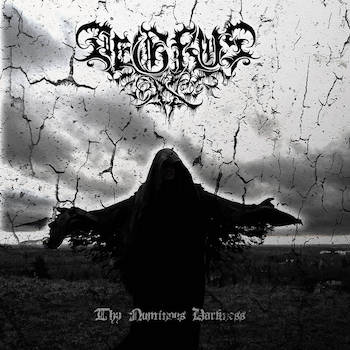 Thy Numinous Darkness, the sophomore album of Aegrus, was released in 2017. It’s a good album, no doubt at all. But wedged between the masterpieces Devotion for the Devil and In Manus Satanas, it is not easy for the material to get the attention the album actually deserves. I have heard that insiders call this phenomenon the Quorthonic “The Return…” syndrome. In other words, in view of two very strong competitors, nuances play a bigger role than they usually do. For example, the opener 'Embodiment of Chaos' starts with ice-cold guitar sounds, but the beginning makes a promise the song cannot fully keep. It’s a good piece, but a surprisingly soft break is quite annoying. Bone-shaking openers of other black metal classics are like a diabolic explosion of power, just think of Behexen’s “By the Blessing of Satan” or Marduk’s “The Hangman of Prague”. In comparison, the first song of Thy Numinous Darkness appears relatively faceless. However, it is still better than the closer of the album. Its title ('Transcendence') indicates the more or less airy and gliding approach of this instrumental. The song marks a surprisingly weak ending of an album of a great band, but who is free from sin?

However, Aegrus also dish up true diamonds of the genre. 'Black Goat Manifest' celebrates six minutes of pure sin with an irresistible, catchy yet merciless chorus and an absolutely flawless overall impression. The guitar finds the perfect black melodies with instinctive certainty, the tempo changes work excellently and neither vehemence nor velocity are missing. Not to mention the constant nagging of lead vocalist Inculta. Seemingly obsessed by Satan himself, he spits out his evil poetry in a masterful manner. This piece and the title track show the full potential of Aegrus. The duo belongs to the best formations of the genre in Suomi – and to be among the best Finnish bands means to be among the best of the world, right? 'Thy Numinous Darkness' (the song) starts almost dreamy, but it turns out to be a pitch-black torpedo that flexes its muscles while high-speed rhythms ensure that the cold and slightly depressive melody lines have a horrifying impact.

These two tracks stand out, but all songs between the opener and the closer jump over the imaginary 80%-hurdle with great ease. 'The Black Stream of Death' is based on an almost rocking guitar line, nevertheless, it unfolds a more than profound darkness. To listen to Inculta while he is crying in agony during the slowest part of the song is nice – and the dominating, more furious sequences are even better. 'Dark Essence' is driven by a great, berserk guitar that shows an immaculate mix of brute force and harsh harmonies. This song is good enough to survive a calm and almost meditative instrumental section – and the opener taught us that this is no matter of course. Additionally, it cannot be taken for granted that the vinyl glitters with a fascinating production. The album sounds opaque enough to create a cruel atmosphere, but it also does not lack the necessary share of transparency. In its best moments the material appears as thick lava that cannot be stopped.

The colourless artwork and the entire design of the 12” are very convincing, even though I am too old for posters. Given this situation and the fact that six out of eight pieces hail Lucifer in a very competent manner, the laborious start and the relaxed end of Thy Numinous Darkness are all the more regrettable. Anyway, as mentioned above, it’s a good or even a very good and recommendable album. Nonetheless, its neighbours have a slightly larger garden, even though the scarecrow of Aegrus (have a look at the artwork) is well done - and it wants you to lend an ear to its album.