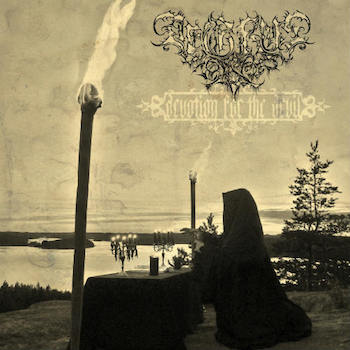 Buy on: Bandcamp
Type: Full-Length
Release Date: March 9th, 2015
Label: Drakkar Productions
Genre: Black
1 Worship Of The Serpent
2 Devotion For The Devil
3 Impaled I.N.R.I.
4 Blood For The Master
5 Necromantic Rites
6 Wolves Of The Luciferian Light
7 Katharsis With Horns (Or How To Fall In Love With Death)
MetalBite on YouTube

Thanks to Aegrus for the way they start the fifth track on their debut, because it makes it easy to evaluate the quality of the production of Devotion for the Devil, their full-length debut from 2015. The drums kick off the song and snare, hi-hat and bass drum convince with their very natural and powerful sound. Some seconds later, the guitar sets in with a drilling tone which mirrors wickedness and vigor. Diabolic vibes are created, and it goes without saying that the genre-typical, expressive vocals do not march to a different drummer. As the song accelerates speed, it becomes clear that the sound engineers also have managed the fast sequences excellently. The mix is neither sterile nor dull or flat. The lead guitar performs magic, cold lines while the supporting instrumentalists and the raw vocals form a more than robust background. All in all, 'Necromantic Rites' marks another track which makes clear why black metal has found so many fanatic supporters during the last three decades. And it is not the only jewel on a debut that is absolutely free from rookie mistakes. Devotion for the Devil appears like the product of competent veterans who still have no other aim than destroying all that is holy. The music presents fire and ice simultaneously, it has everything that makes you shiver and everything that makes you burn.

Finland has become the globally leading exporter of black metal and this fact has raised the bar high for the musicians from Suomi. It’s not enough to pen “only” a good full-length. It needs high quality riffs, coherent song structures, a massive dose of vehemence and enough room for atmospheric elements to rise above the crowd. Simply speaking, Aegrus meet the (high) expectations in each and every category. Although the songs have a critical average length of more than six minutes, there are nearly no tiring or insubstantial parts that mar the overall impression. The two artists take a wild ride through the darkest and most fiery corners of hell, but they never tend to chaos. Carpathian Forest, Sargeist and further comparable formations will surely respect the overall performance on Devotion for the Devil, because the duo masters the biggest challenge in black metal. The guys find the almost perfect balance between pure vehemence and melodic elements.

Nobody, not even Satan himself, can seriously say this or that band is the best from Finland as long as (s)he has not familiarize her- or himself with the outputs of the myriads of bands from the land of the thousand lakes. Of course, this is mission impossible. Anyway, there are only two options. Either Aegrus is part of the spearhead of Suomi’s legions (I think so!) or the competitors are unbelievably strong. Be that as it may, the seven tracks make it easy to enjoy the album. Songs like the title track or 'Impaled I.N.R.I.' have an excellent flow, the necessary modicum of melodies, dynamic guitars and appropriately fast drumming while scoring with a pretty horrifying aura as well.

There is no question that Aegrus are gifted with talent and they are able to convert this talent into outstanding black metal tunes. The guitar lines do not lack depth, a tinge of melancholy is competently embedded – the beginning of 'Wolves of the Luciferian Light' almost sounds like a wistful Viking rock number, but it transforms into another intensive black metal orgy - and some rather conventional vocal parts add a different aroma from time to time. The mysterious artwork is also convincing (while the drawings in the booklet suck) and given this situation, every black metal supporter should lend an ear to this album. Devotion for the Devil is a great beginning that confirms the equally great reputation of the Finnish scene.