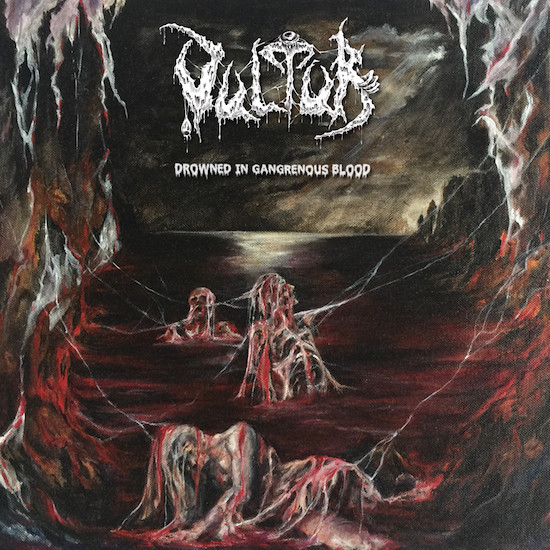 One look at the cover or one glimpse at the title - Drowned in Gangrenous Blood - and you pretty much know exactly what type of metal is served by four Greeks under the Vultur's moniker. Let's add some influences by bands ending with -tion, like Suffocation, Immolation, Incantation mixed with dose of Morbid Angel and by now you should know if this is your gem or should you move on to the next release already.

For better part of the record Vultur creates creepy atmosphere by operating in mid, shit-heavy tempos enjoying drowning its victims in putrid gory baths with morbid harmonies and spewed up vocals, but when necessary also not shying away from occasional outbursts of belligerence with blasts ridden tracks like in two openers; 'Groans of Excruciating Torture' and 'Drowned in Gangrenous Blood'. Sick and gloomy guitar leads laid down throughout the record are my personal highlights here, adding spacious element to otherwise suffocating and torturous riffs. At times, Vultur even plunge into doom territories to make sure your unquenchable thirst for death is completely satisfied by the time the album hits the last note. Little over 35 minutes of dense chugging guitars, thick bass lines and double bass rolls with no tricks or gimmicks will definitely get the job done but while taking a massive leap forward compared to the debut Entangled In The Webs Of Fear, more variety would definitely have higher overall replay value and keep the connection with the listener a bit more intimate. But on the other hand, do I want closer bond with those gangrene drenched death metal fluids? Hell no, let them bath in their own pile of feces.

Low and thick but with all instruments not choked in its own mud production, Drowned in Gangrenous Blood is a pleasure to listen to and while you won't find new elements or progressive arrangements, Vultur compensates those gaps by coming across with genuine effort delivering no compromise, pure vintage death metal. After all, that's all I need to make a new record as part of my collection.