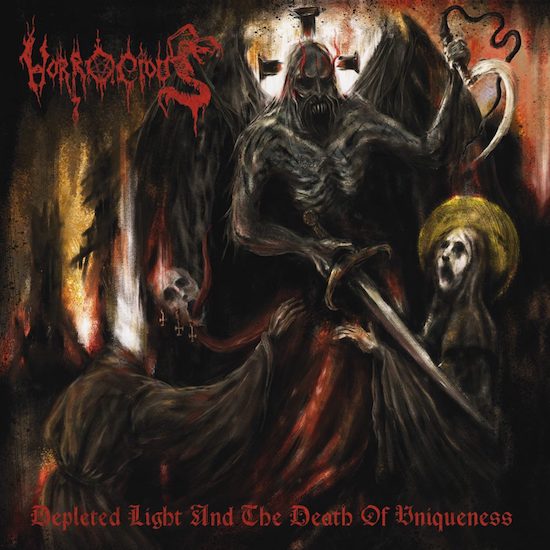 I have never been to Turkey and I do not intend to change this status. So, it was more than necessary that a good full-length from this country caught my attention. Horrocious exactly deliver such an album. It spreads the constantly raging, endlessly hating and murderously hammering vibes that make a black metal work to something special. I mean a lot of promos flood (not only) my e-mail account and honestly speaking, sometimes I wish I could stop this evolution. I know I have mentioned it already in other reviews, but once again: too many noise-makers overestimate their skills. They seem to be haunted by mentally ill phantoms that whisper them fairy tales about their creativity, but their only piece of art is to shit the first letter of their forename. Therefore, it feels good to find the treasure chest in all this flotsam and jetsam (and it is surely no coincidence that the eponymous band should have stopped it production after the second full-length as well). Horrocious do not belong to these creatures that do not know their limitations and so the only gross misconduct of Depleted Light and the Death of Uniqueness is its lousy artwork. A Turkish band that spits on Christianity is somewhat ridiculous, isn’t it? My naïve brain thought they have another dominating, even stricter religion they should concentrate on. However, the music is what counts.

The death of uniqueness was an event that happened long ago in terms of metal and it is only logical that Horrocious do not deliver completely new or singular sounds. However, they create an amazing level of fiery energy. Their music generates an enormous intensity and even though tempo shifts play a rather non-prominent role, the dynamic of the songs should not be underestimated. I know I should be cautious with comparisons, but I would like to whisper four words carefully: “De Mysteriis Dom Sathanas”. Yes, exactly this milestone comes to my mind. Why? Well, the music of the dudes from the Bosphorus also has this incredible density, a high degree of velocity and, last but not least, the right balance between harsh melodies and untamed violence. And just like the eternally unreachable classic from Norway which actually deserves a 100+X% rating, Depleted Light… is a very monolithic work. The band runs out of ideas at no time and the drummer must be the Ottoman edition of Hellhammer. Finally, the lead vocalist appears as the little brother of Attila in “Hidden in Infinite Chaos”, because he integrates one of these opera-like, dramatic vocal lines that gave “De Mysteriis Dom Sathanas” one of its countless special flavors. By the way, the fact that it is easy to compare this work with the genre’s absolute masterpiece also means that Horrocious do not integrate any elements of Near East folklore. Melechesh are definitely no point of orientation for the Turkish formation. The guys play a non-regionally influenced form of black metal which works globally.

The album glitters with a remarkable degree of catchiness, even though the band does neither focus on conventional patterns nor on smooth lines. Nevertheless, the overall impression causes a long-lasting aroma. As soon as the opener’s first tones come out of the speakers, the listener walks through the widely opened gates of hell, straight into the purgatory and without a return-ticket in her or his pocket. The flames are growing stronger and stronger and leave no room for sentimental feelings. Every tinge of melancholy, for example at the beginning of “Everlasting Fractal Luminiscence”, and any form of meditative sections, for instance the first notes of “Hidden in Infinite Chaos”, turn out into the next all-engulfing fire of perdition in a matter of seconds. Blast beats ensure that the flames keep burning and the passionate vocals are helpful as well. The entire output is imbued with an infernal aura and - due to the compact, voluminous and somehow malicious mix - exactly this mood comes much more into full glory than it does on millions of heavy-handed, badly produced underground works. No doubt, Osmose proved a good instinct when signing this formation, because it handles the aesthetics of the black style very skillfully.

So my only open question was whether or not I have the courage to say that this is a perfect work. (Sometimes I wish I were one of these relaxed dudes who give 100% in four out of five cases.) Of course, I do not know how long this album with its eight mega-highlights will fascinate me the way it does right now. The absolutely flawless masterpieces of Exodus, Slayer or Possessed have lost nothing of its power during the last (almost) 35 years, but I don’t want to wait with the release of this text until 2054. Aggravating the situation, I fear that M-A does not accept reviews from beyond. Otherwise I surely would have seen Lemmy’s 100% laudation for “Another Perfect Day”. Well, guess I have to train my manager muscle right now. Thus, I take the decision: the infernal drama, the violent melody lines, the opaque vehemence, the outstanding mastery of complex song patterns and the fact that I could not find just one boring or even annoying second in the more than 45 minutes of Depleted Light and the Death of Uniqueness leave me no choice – 100% is the only correct rating. What a killer album! But I still don’t want to visit Turkey.

The last time I was this impressed by a Turkish extreme metal album was back in 2018 with the release of Burial Invocation's "Abiogenesis", a death metal record yes, but nonetheless still quite an impressive one that managed to compete with some of the more established underground acts at the time within the United States of America. Horrocious' "Depleted Light And The Death Of Uniqueness", though being a black metal effort follows the same path of excellence and distinction. It is not groundbreaking by any means, but for what is offered, the fact cannot be neglected that Horrocious' steel is impressive. The amount of times I have heard this kind of material played is countless, Marduk has done it and numerous others, however this bunch have the finesse needed to succeed. Another element that draws me to this band in particular happens to be the fact they originate from Turkey, a place I'm somewhat interested in as far as their extreme metal is concerned.

At first glance, 45 minutes would seem a bit excessive to a picky black metal listener but through being inquisitive there lies a will to endure until something worth the highlight is allocated; such a manifestation takes place on "Depleted Light And The Death Of Uniqueness" rather early, showcasing the ability to create a lengthy record almost absent of any breaks in momentum that can maintain my attention is a major plus. Opening with 'Light Belongs to Our Heresy' a six minute track, the folks in Horrocious tear some threading from second wave black metal and mend it with their Turkish steel of misanthropy, chaos and nothingness. There's no question about their musical capacity, note the word 'musical' as what they deliver is memorable and does not mimic a wall of dried fucking paint. They are definitely within the know-how as far as creating intensity and turbulence through standout riffs, leads, drumming and atmospheric undertones.  It's so well executed that its fairly difficult to pick a favorite track even after many listens. 'Upon the Fallen Worlds', 'Corruption of Existential Structure' and 'Hidden in Infinite Chaos' carry the drive of music worth some considerable spin-time on the turntable.

Through the raging intensity, music is never taken for granted or erased; I've heard many a musician use the term 'raw' and 'extreme' to cover or overshadow the lack thereof but that is non existent here, Horrocoius ensure the listener is kept headbanging to the beat from commencement to conclusion. The unit of Godslayer (guitars), Tyrannic Profanator (vocals), Erhan Kabakçı (bass), Goatperv_ (drums) and Can G (guitars) put their weapons to laudable use in crafting a fine debut record. "Depleted Light And The Death Of Uniqueness" is surely a showing of tenacity and technique buy the Turks thus I can say through this I am even more interested in the metal Turkey has to offer; surely a record you should own especially if you are into this craft. With little bit of Marduk and Goatpenis storming around this record, you can't complain. "Depleted Light And The Death Of Uniqueness" is the result of madness and muscle channeled through a musical medium.