HORROCIOUS has arrived from Turkish shores with a wretched curse riding on "Depleted Light And The Death Of Uniqueness", their debut full length. Never a dull moment here, blasting on full cylinders the quintet dishes out killer riffs and leads inciting anger and aggression; 'Light Belongs to Our Heresy' and 'Hidden in Infinite Chaos' are among some of the malevolent workings being stirred within this cauldron of chaos. Gaze deeply into the space of emptiness and become one with the creatures.

"Depleted Light And The Death of Uniqueness" is a collection of pummeling tracks with and energy being emitted that can be neither ignored nor repelled. HORROCIOUS captures a hunger telling of their passion for the craft and will to maintain the glory of the genre. Still this is a formula attempted by many bands and mastered by few, should they continue on this path they will join the latter. These Turks craft their steel as though they have been before the black anvil since its conception: thus, MetalBite are fortunate to stream "Depleted Light And The Death of Uniqueness" due out on CD, Vinyl and digitally through Osmose Productions; 25th October 2019. 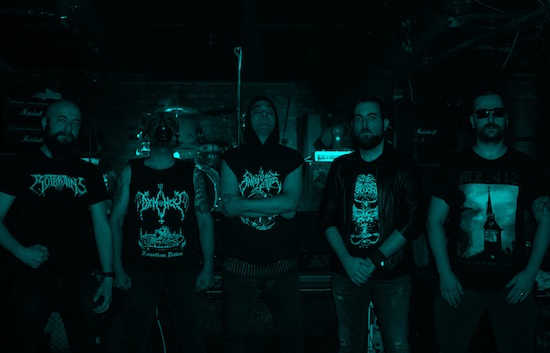 Wanna get assaulted the 90s black metal way? Then you picked the right time to do so, new comers Horrocious send a massive fuck you to all things sacred with their debut full-length record, "Depleted Light And The Death Of Uniqueness". Storming from Istanbul Turkey, the quintet makes known their morbid presence through 8 tracks of utter desecration and destruction. Unholy be the path they walk, proud and eternally dedicated to the craft of blistering hate-filled black metal. Not too familiar with the Turkish activities concerning underground metal and metal in general so this record by Horrocious caught me off guard to say, long story short, it's brilliant.

The last time I was this impressed by a Turkish extreme metal album was back in 2018 with the release of Burial Invocation's "Abiogenesis", a death metal record yes, but nonetheless still quite an impressive one that managed to compete with some of the more established underground acts at the time within the United States of America. Horrocious' "Depleted Light And The Death Of Uniqueness", though being a black metal effort follows the same path of excellence and distinction. It is not groundbreaking by any means, but for what is offered, the fact cannot be neglected that Horrocious' steel is impressive. The amount of times I have heard this kind of material played is countless, Marduk has done it and numerous others, however this bunch have the finesse needed to succeed. Another element that draws me to this band in particular happens to be the fact they originate from Turkey, a place I'm somewhat interested in as far as their extreme metal is concerned.

At first glance, 45 minutes would seem a bit excessive to a picky black metal listener but through being inquisitive there lies a will to endure until something worth the highlight is allocated; such a manifestation takes place on "Depleted Light And The Death Of Uniqueness" rather early, showcasing the ability to create a lengthy record almost absent of any breaks in momentum that can maintain my attention is a major plus. Opening with 'Light Belongs to Our Heresy' a six minute track, the folks in Horrocious tear some threading from second wave black metal and mend it with their Turkish steel of misanthropy, chaos and nothingness. There's no question about their musical capacity, note the word 'musical' as what they deliver is memorable and does not mimic a wall of dried fucking paint. They are definitely within the know-how as far as creating intensity and turbulence through standout riffs, leads, drumming and atmospheric undertones.  It's so well executed that its fairly difficult to pick a favorite track even after many listens. 'Upon the Fallen Worlds', 'Corruption of Existential Structure' and 'Hidden in Infinite Chaos' carry the drive of music worth some considerable spin-time on the turntable.

Through the raging intensity, music is never taken for granted or erased; I've heard many a musician use the term 'raw' and 'extreme' to cover or overshadow the lack thereof but that is non existent here, Horrocoius ensure the listener is kept headbanging to the beat from commencement to conclusion. The unit of Godslayer (guitars), Tyrannic Profanator (vocals), Erhan Kabakçı (bass), Goatperv_ (drums) and Can G (guitars) put their weapons to laudable use in crafting a fine debut record. "Depleted Light And The Death Of Uniqueness" is surely a showing of tenacity and technique buy the Turks thus I can say through this I am even more interested in the metal Turkey has to offer; surely a record you should own especially if you are into this craft. With little bit of Marduk and Goatpenis storming around this record, you can't complain. "Depleted Light And The Death Of Uniqueness" is the result of madness and muscle channeled through a musical medium.