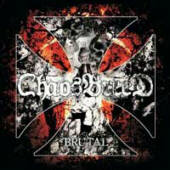 With that out of the way let’s move onto ChaosBreed. By now you will all know that this group is Finland’s answer to… unh. Well you do the mathematics. I can imagine the sticker right now:

Or some such thing.

I suppose if you can imagine a hybrid of the more modern and energetic Bloodbath, and the classic death-n-roll of Entombed then you can pretty much take this record as read. Brutal (all that aptly named hyperbole crap if you want) is an energetic release that highlights rattling rhythms, punchy drum work and sick leads that probably make you want to go masticate a dog or something. My favourite aspect of Gandalf was always Nalle Österman’s killer drumming, so to hear him in full flow here is just dandy by me.

What with it being such a high energy affair, we should probably forgive lyrics like “I am the Monkey on your back, the boogeyman under your bed…” Death metal to scare the average 5 year old, I suppose. What can’t be forgiven is the completely inconsistent songwriting. There is probably one or two truly great songs on the album, but otherwise storming songs like ‘Moralized’ suffer something stupid like an out of place chorus, and things fall apart from there. Add to that the lack of a murky charm that the previously mentioned acts extolled and you get something that doesn’t quite cut it.

I won’t deny it, this album reminded me how fucking good Entombed are, and I’m not saying that in a bad way. But I guess it’s just a matter of if you’re going to take on the original you need to be able to cut it. These dog-masticating maniacs aren’t close the being in the same league yet.