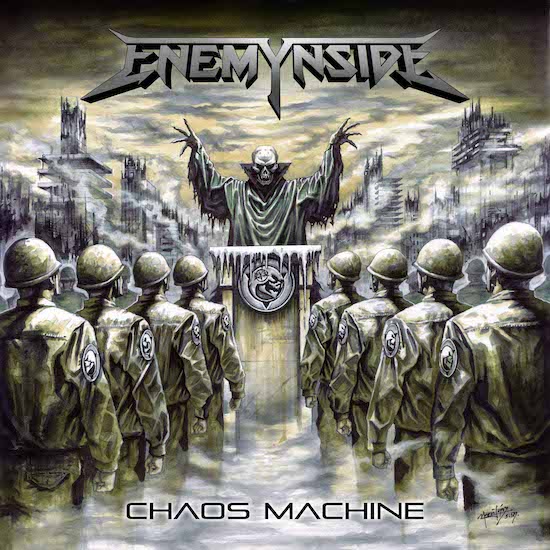 To start a project with an own goal is always a miserable pity. The opener of Enemynside’s fourth full-length illustrates this very impressive. Its name (“Faceless”) seems to be the admission of the Italians that this track has nothing to offer. Its form of somehow annoyingly meandering thrash – the riff does not know whether it wants to transport aggression or a melodic touch - appears as a musical stillbirth, because the combination of “mild” and “thrash” is absurd per se. Thus, I actually wanted to stop the listening session after the first number, but I am a lazy guy, old and slack. Therefore, it was too much work to press the button. And lo and behold, the dudes know how to fight. As soon as the second track sets in, the formation celebrates the force of jagged riffs, dynamic lines and powerful thrash shouts of the lead vocalist who is supported by solid background vocals from time to time. No doubt, the lead singer is gifted with truly metal-compatible vocal chords, he sounds like the thrash edition of the equally strong and robust vocalist of Mystic Prophecy. In view of these positive details, I almost regret that I never heard a tone of their first three albums, because classic thrash without lame mid-tempo orgies or oh-so-groovy rhythms gets never boring. Never! Everybody who disagrees should immediately suffer from hair loss, tooth decay and ear wax.

Okay, the Italians are not totally immune against relatively harmonic sequences. They try to increase the degree of catchiness by interspersing some melodic lines in the bridges and choruses, while the pretty musical solos which have nothing in common with the shredding feasts of Hanneman (R.I.P.) or King on “Reign in Blood”. The band is rather comparable with formations such as War Curse, Evile or Testament minus “Demonic” and “The Ritual”. The four-piece is in its element when it comes to highly dynamic leads that rely on coherent song structures and this is, for example, the case in “Frozen Prison Cell”. The transparent, modern yet inspired production flirts successfully with the traditional approach and the effect is that the spirit of thrash proves its unbroken standing once again. The sharp guitars do not lack pressure and rawness, the drummer has understood the relevance of high velocity and the entire band appears as a well-programmed machine. (But do not expect any type of chaos, although the album’s title indicates this.) All in all, the album reflects the enthusiasm of its authors and this feature lends the material a very lively touch. Even though there is still room for improvement with regard to the song-writing, I cannot say that Enemynside can be blamed for having made major mistakes.

Quite the opposite. The homogeneous album, equipped with an adequate artwork, is not highly original, but the band also avoids riffs which have been shown up many times before. Songs like “Suffered Defeat” give you nice adrenalin flashes and deliver the stuff you must smoke as long as you want to be a real thrasher. “Frozen Prison Cell” sounds even better and marks the climax of an album which grows with every new spin. Even the short outro has a certain charm. Of course, Chaos Machine will be hated by all those assholes who proclaim that thrash is dead. Piss off and listen to your stale NWOBHM banalities, to your sleepy doom operas or to your mega-vibrant bullshit from the seventies. We, who are standing on the right side, know it better.