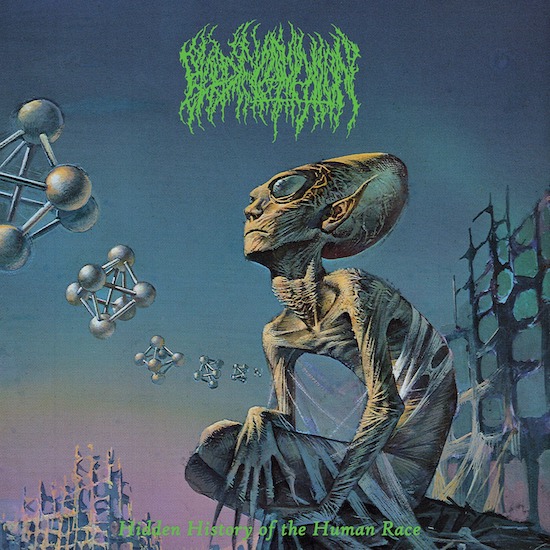 Type: Full-Length
Release Date: November 22nd, 2019
Label: Dark Descent Records
Genre: Death
1 Slave Species Of The Gods
2 The Giza Power Plant
3 Inner Paths (To Outer Space)
4 Awakening From The Dream Of Existence To The Multidimensional Nature Of Our Reality (Mirror Of The Soul)
MetalBite on YouTube
MetalBite on YouTube

Blood Incantation, the name has been quite the talk since Interdimensional Extinction. Starspawn was birthed, thus giving the band stronghold in the underground. Obviously Timeghoul served as a major inspiration but Blood Incantation being fortunate enough to lurk within the modern era of technology, communication and support, are able to carry-on in contrast to Timeghoul, which should have made a comeback seeing so many bands are cashing-in on their formula. It’s been a little over 3 years since the release of Starspawn so the anticipation among avid fans were understandably high for what they expected to be a direct follow up and monumental undertaking by the band. There had been so much weighing on this new entry now titled Hidden History of the Human Race, it made me wonder if they were even able to live up to those expectations and/or demands. Which brings me to a question on most minds; is Hidden History of the Human Race anything worthy of Starspawn status?

Consider the record a technical and progressive evolution of its progenitor. Starspawn was a staggering display of serpentine atmospheric death metal, the new installment on the other hand, is still complex (a bit more in-fact) however, its atmosphere has been diluted to facilitate the hike in technical and progressive elements. Such a step does not insinuate the band's intricacies dominate to the point of purging the record of any atmosphere, instead it points in the direction of a unit willing to explore and take risks to unearth a new chapter in their music.

For anyone hoping Hidden History of the Human Race would be a repetition of that omnipresent and eerie milieu called into effect on Starspawn, you will be disappointed to find that is not so. In opposition, for the listener salivating over the band's technical and progressive talents, your latest craving will be served in abundance. "One man's loss is another man's gain", Hidden History of the Human Race embodies the saying. Don't let the gloomy nature of such an absence deter you from the record, the adjustment implies Hidden History of the Human Race goes its own route in comparison to Starspawn; thus, it is apparent Blood Incantation did not want to make something they already did. I can see why the record would be polarizing among a percentage of the band's supporters; however, I believe the it will gain the appreciation of even the toughest and most outspoken critics over a period of time.

'Slave Species of the Gods' pretty much laid out an accurate projection of what direction the band would take this time around. Even after having heard the preview of 'Inner Paths (To Outer Space)' (which did retain a minuscule but noticeable percentage of atmosphere), one could tell the band was maneuvering a clearly less ambient path, hence there's no surprise the album reflects precisely that. But just how much of the climate is suppressed?, enough to be dwarfed by the complex chest puffing festival passing by. Remember all is not lost amidst the intricate environ, 'The Giza Power Plant' has its moments somewhat reaching back (to some avail) for the milieu Starspawn copiously communicated to the listener, hence this track predictably would be one of the favorites (among subscribers of such) on Hidden History of the Human Race. The final mouthful being 'Awakening from the Dream of Existence to the Multidimensional Nature of Our Reality (Mirror of the Soul)' is the 18-minute opus that whilst compositely sound also fairs well in reaching a convincing climax.

The end-product bares more in common with an involuted expedition which one may argue is a representation of the circuitous themes explored. The team of Isaac Faulk, Paul Reidl, Jeff Barrett and Morris Kolontyrsky put their hearts into making Hidden History of the Human Race an authentic record, even going the length of recording the album in analogue. That's something to consider given the labyrinthine nature of the music and how difficult it is to record in such a transmission. Antti Boman's interstellar roar on 'Inner Paths (To Outer Space)' could be seen as the album's certification.

At first I was questioning the adjustment in wiring of the band's musical circuitry now seemingly configured to appease their technical and progressive talents; however, after repeated listens I have come to appreciate and even love the album. Though through Blood Incantation's lack of subservience to the crowd that would have wanted the atmosphere to be a dominating factor, the little on display has proven to be still ancillary to an extent. And while it may not be what I was expecting, nothing can be taken away from the excellence of the drumming and riffing. Some may argue that the instrumental fiddling is too reflective of filler, I view them as not being such undesirables, rather, inclusions procedural and integral of Blood Incantation’s identity. Complete with the intriguing artwork of Bruce Pennington, Hidden History of the Human Race is a much-needed stepping-stone in the band's musical journey, still inchoate whilst being nourished.