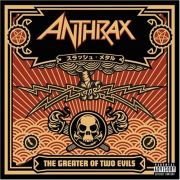 Anthrax has had a hell of a run over the years. They’ve swapped three vocalists and survived those bizarre years during the mid-to-late 1990’s, when American metal took a serious dive underground, Metallica hacked off their hair, invested in some makeup and decided to record an interesting little album titled, Load.

2004 is thankfully a different world and metal bands are popping up from coast-to-coast. Anthrax and other acts like Iron Maiden, Megadeth and Judas Priest are enjoying a revival in the States.

The Greater of Two Evils gave the “power to the people” and let them vote via Anthrax’s official website on which Neil Turbin/Joey Belladonna songs they wanted to hear recorded with the current lineup. It’s scary to think John Bush has been in the band for over a decade already.

Recorded “live” in the studio over the course of two days, this disc revisits songs from Fistful of Metal, Spreading the Disease, Among the Living, State of Euphoria and Persistence of Time. While he can’t reach those Turbin/Belladonna screams, Bush’s voice is polished, showing no signs of wear and tear. Frank Bello’s bass twangs through time in this classic thrash attack and Charlie Benante’s limbs haven’t slowed up in 20 years.

It’s not fair to view this as nostalgia, but rather a revisiting and celebration of where Anthrax has come from. These classics have all the foot-stomping, metal grit the originals did; some even more so. “Deathrider,” gets a modern-day tune-up, while other tracks like “Caught in a Mosh,” “N.F.L.” and “Indians” will squeeze the adrenaline from your glands like the originals did the first time you heard them. The only track that came up short was “Belly of the Beast,” where the band seems out of tune and style.

Instead of getting caught bootlegging Anthrax’s next show, or getting a crowdsurfing, kick in the head while yelling along to “Among the Living,” you can listen to these classics in the safety of your home.