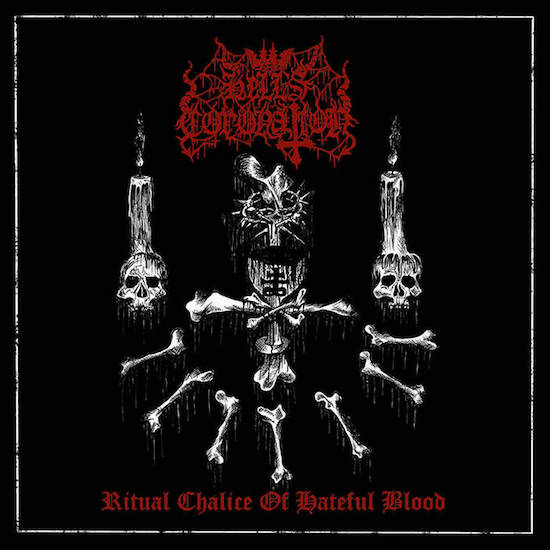 An altar prepared by Hell’s Coronation could only mean one thing, its hunting time again; thus, it’s open season in Poland, hence no wrath be spared. Unholy Blades of the Devil showed us just how committed to the hunt Hell’s Coronation were; Ritual Chalice of Hateful Blood now gives the listener a full look at the beast in full gear. Driven by a passion to eliminate all light and flood this world with darkness, Hell's Coronation invoke a gust of black/doom metal that tears through all defenses. Ritual Chalice of Hateful Blood is precisely what I wanted to hear after they erected such an unshakable tower through the blackened eroticism emitted through Unholy Blades of the Devil. Still that record is placed ever so high in my regards, earning many a mention because of its execution and promise. Godz Ov War Productions will authorize the hunt come October 31th, 2019 under the full moon of a cursed sky.

In the wake to remain among the esteemed, many have tried and failed at this thing known to us as black metal. But to efficiently put your hand to the craft with the intentions of adding another layer of morbidity makes it all the more challenging. Carving a path out the fat of multitudes uninspired, Hell's Coronation wastes no time putting their blades to work here on Ritual Chalice of Hateful Blood as they sacrifice the lazy and uncommitted through most gruesomely implemented measures. Slow, thick and stalking riffs fill this abode, drums hypnotized by the gaze of spells ever wicked follow and menacing vocals lay the path in conducting this event of mass sacrifice. No enemy spared, no final words permitted, the ritual practice ushered by ‘Levitating in Tarry Fog’ is followed by ‘Covenant of Doom’ and already by the might of Coffincrusher and Zephar the blow of brutality scourges all benediction in reassuring the pupil and avid listener Hell’s Coronation has not fallen below its own standards set. Surgical hands play as if in the act of a litany, the grace of slow motion perpetrated by ‘Mighty Black Flame’ providing the guide for ‘Fullmoon in the Sinister Light of Providence’. These tracks are amidst the best efforts Hell's Coronation have pieced together.

Functioning as a dual unit, it is a marvel what a small disciplined cult can achieve when concentration stands uninterrupted; taking what was done on their EP and giving it the ground and scale needed to make a greater impact is evident on Ritual Chalice of Hateful Blood. Not forgetting that sense of eroticism brought with Unholy Blades of the Devil, it returns as a tinge or undercurrent, but is felt despite the severity dealt. Within a 38-minute session there in too lies the feeling of completion and fulfillment; clear of dragging momentum or unnecessary inclusions. No need for intricacies, just the cold unforgiving touch of deluged riffs, the daggering puncture of the drums, choirs and samples clinged to non compos mentis and vocals being vomited forth bitterly. Hell’s Coronation on this wolven dusk has hunted well; food lays in abundance for the pack.

Amidst their success, i still wish to see what else Hell's Coronation can and are willing to do with their formula in developing their approach. I somewhat consider Ritual Chalice of Hateful Blood another step taken to realizing a more extravagant, theatrical and/or grandiose recording to follow. More than what is required to attain such is present through their fluent playing and clarity of what was captured during production. The saturnine ceremony comes to a close with ‘Resurrection through Condemnation’, the height of the ritual, the purpose completed, the right-hand path rejected through desecration; mislead no more be this once wanderer, now reborn, elected and crowned in the presence of the black flame.