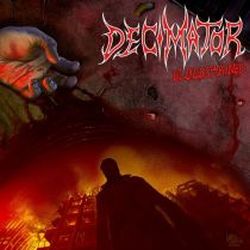 Thrash metal has different faces and bands from South America have an affinity for its wildest visage. Decimator from Brazil do not march to a different drummer. Their musical approach does not lack energy and pressure, and some might say they play a combination of death and thrash metal. I do not agree, because deep growling or low-tuned guitars do not show up. As mentioned before, I just listen to a rather orgiastic form of thrash, but I cannot identify external influences. Decimator do not suffer from technical incompetence, but they do not focus on the technical finesse of the old gods from the Bay Area and they stay clear from the rumbling thunderstorm that albums like "Pleasure to Kill" generated. They are somewhere between these two poles - and they have this greed for ultra-fast rhythms that documents their thrashing authenticity.

Sometimes I am not sure whether units like Decimator are really interested in writing the best songs they can create. From time to time, it seems to me as if they rather play music in order to let steam off, no matter what's the price. They spit out many different sequences and so it happens a lot during the songs, but the overall picture remains improvable. No, there are no serious defects that hurt the joy of listening in a significant way. "Streams of Blood" has some mid-paced sections with a recognition value, but this is just the exception to the norm. No doubt, some more hooks would have been a good idea in order to give the audience more orientation. The absence of catchy parts has the effect that nearly everything rushes by without creating a long-lasting impression. The riffs do not always have the space to demonstrate their entire lethal strength and some "Reign in Blood"-comparable parts end much too soon. Even the best jagged riff needs a stage, but Decimator have too many ideas and they quickly concentrate on the next sequence. Some parts of "Day of Wrath" are pure Hanneman/King-worship, but the Brazilians fail to make a song out of these sequences that can challenge their idol's classics from 1986. However, they add a grain of insanity. It sounds as if mangy dogs play their kind of Slayer-influenced thrash - the name of the record label is probably no coincidence.

As a consequence, the eruptions pave the way for an enormous portion of hate, anger and rage. The album does not lack intensity and the band is clever enough to vary the tempo in order to get a dynamic overall impression. The pinpoint production meets high standards and the young-Mille-like barking of the lead vocalist accompanies the violent leads and riffs in an adequate way. From my point of view, the passion of the dudes makes up for the small song-writing deficiencies that prevent a higher impact of the songs. This is still great and pretty brutal thrash that does not intend to take prisoners, so if you are a genius and you suffer from the fact that the rest of the world is simply too stupid for you, Decimator can crush your bothersome brain cells in a matter of minutes. But even if you are just a normal dude, these dudes can show you how merciless thrash metal works. I am sorry that I cannot recommend single highlights, because these whirlwind clouds my perception. Anyway, I can assure you that these 30 minutes will let you forget any other drug you actually like to consume.