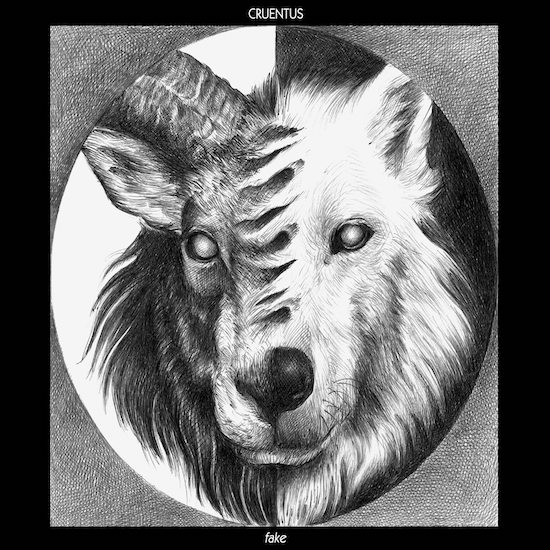 Going to the grocery store to pick up the common necessities could be a bit of bore sometimes given you have a general idea of what you set out to get, hence there should be no issue as long as the list can be fulfilled by the supplier. Uneventful mostly, however there are some instances you encounter an item/s that appeals to your urge in that particular moment and what happens is, shopping becomes a thrill for a few minutes again. That’s how I feel about thrash metal, I've grown so accustomed to it that it sounds of background music for working out or doing absolutely nothing. But once in a while something makes you want to bang your head again and relive the first moments you discovered the sub-genre. That's my impression on Cruentus' sophomore album Fake, which is their follow-up to 1996's In Myself. That's what I call a highly anticipated return album. Some bands have only been around for 5 years and have nearly as much albums if not more and that’s not a good look at all, (grindcore). Cruentus on the other hand have spent time wisely trying to make their second offering a thing that speaks for both past and present thrash metal eras and the band as a functioning unit. The genre Cruentus plays is death/thrash metal; many bands have approached metal from that angle, still it has at least for me proven to be a bore on many occasions considering the uneventful drum patterns, monotone vocals and filler riffs. Cruentus understands that the sub-genre is like gum, after a few minutes of being bombarded by teeth, its flavor begins to dissipate rapidly. How do they combat the reality of a beaten sub-genre, they step out of it's safe-space to make a memorable album instead of just another item with a price tag? To achieve such Cruentus dissected and added depth to the tunes through the use of sludge, groove, doom metal and some attributes of Death's technical/progressive metal era among other things.

Getting me to forget how much I dislike thrash metal even for 30 minutes is not easy but Cruentus did an above decent job of that with Fake. I think what helped the record from falling into the barrel of boredom comes through their fine incorporation of sludge metal and groove, in turn giving the recordings a rhythmic posture preventing that stationary, inanimate linear effect most thrash metal usually inscribes. 'Spoil the Flesh', 'Never Forget', 'Funambulism' and 'Shadows' are among some of the best moments to be experienced on Fake. Demonstrating not just the experience of the group, but they’re never faltering will to produce distinguished music. In addition, Fake arrives with a lingering presence of the early 90s thrash/death scene, hence reinforcing the band never abandoned their roots, instead reserved what most consider the golden years of the genres as an embedded characteristic of their recordings.

Having enjoyed most tracks on the record, I still was not content; it seemed as though I was searching for that one grand finale, decisive track and I'm happy that I did. It came to be later down the order in the form of 'The Strain'. What bit me? The opening riff which sounded like a merging of Inquisition's "Where Darkness is Lord and Death the Beginning" and "Desolate Funeral Chant". Either that riff was manufactured subconsciously, or it was penned as a direct nod to Inquisition (Colombia) whom might I remind you, started their quest as a thrash metal band; hence it seems fitting. Though probably not the best of examples, it's certainly structured similar to that of an Inquisition riff. Definitely the most memorable of songs featured on Fake; it takes the best aspects of Cruentus' playing and amalgamates them in succinct fashion. Their mid-tempo trotting, high-octane thrash metal riffing and drumming, the organic vocals, the sludge metal influences of Crowbar and Pantera all congregate and are executed effectively to give the listener a good lasting impression as the album meets its closing moments. Nicola Bavaro (vocals), Antonello Maggi (guitars), Domenico Mele (guitars), Valerio Di Masi (drums) and Adriano Boghetich (bass) amassed a work of significance to remind all ears the band is still very much dedicated to genre.