The Italian veterans of thrash-death metal Cruentus released their second full length album called "Fake" on October 15th and it's been getting nothing but enthusiastic reception from metalheads everywhere. New album brings solid death-thrash supported by strong lyrics and images and topped off by old school attitude. Check it out if you haven't yet but first read up on what Adriano had to say about the creation, recording, artwork of "Fake" and also few other things in between. 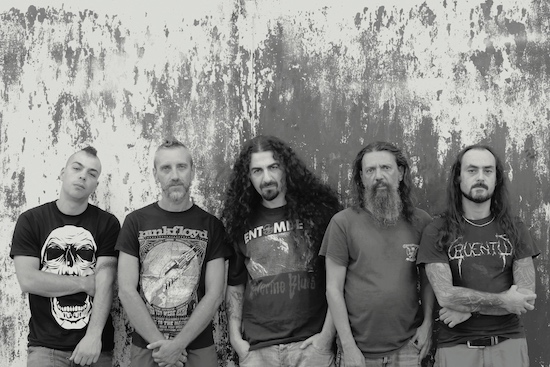 Greetings Cruentus! Glad you could answer few questions and shed some light on recent events. How is everything going?

Hi MetalBite, I'm Adriano (bass) of Cruentus, everything's all right. Hope my English will be ok for your standards and you appreciate answers. Thank you so much for talking to us. We just had 5 shows, after a couple of years of resting, to promote "Fake", so we're full of power. 2020 will be great for us playing live as much as we can.

I'm going to shoot straight and ask the question that probably most out there are thinking: with only two albums and a handful of demos in 30 years, you like to take your time aren't you?? (laughs) What were the reasons for staying away from studios and recording equipment?

In all these years we never really stopped. We kept playing live, testing different sonorities and a lot of different musicians. Nothing and nobody gave us a sense of satisfaction. Me, Antonello (guitar) and Nicola (vocals) played together for 30 years and we were looking for someone with the same attitude. 6 or 7 years ago Domenico (guitar) and Valerio (drums) started to play with Cruentus and they were what we needed! So, we arranged the songs, tested them live, entered the studio and recorded it. The time to do it was expanded because we have personal lives to conciliate with music.

What was your frame of mind when composing, was there anything that influenced you differently (were there any non-metal influences that surprised even yourself), what was your main inspiration?

Antonello is the main composer of the music since Cruentus was born. We're friends and band's mates since 1991 and I can answer that he has a natural process to create. He takes his classic guitar and plays a couple of riffs. All of us listen to a lot of musical genres and everything influence us and Antonello. We started listening to the music with NWOBHM and then with thrash metal burning in those years (end of 80ies) but soon we felt in love with the 70ties rock music and the musicians who change the way to rock.

Antonello brings the ideas, and often the whole song to the practice room and other instruments find their lines. Together we arrange the song and play it a lot of time, changing and fixing details to reach the best we can for our ears!

What turned out to be the hardest part to overcome while composing and recording new album? Was there a song that gave you the most trouble and why?

It came very easily. We knew what we want and focused on it. We entered the studios very relaxed and calm. The producer was really peaceful too. We recorded "Fake" in 10 days plus 2 or 3 days to mix and master. And if I have to find a most troubled song it was 'Funambulism'. It's a mid-tempo and has a particular riff in the chorus with a lot of notes. We worked quite hard to have a perfect harmony among all the instruments. Also, the solo in the middle was a bit complex because Domenico didn't like the result for 4 or 5 times.

We waited for so long to record our second album that it was like a liberation…(laughs). We're really happy of this work. We think it shows our evolution, as men and as musicians, along these 23 years of discographic silence. People frequently asked for a new album and we answered to wait because we wanted to do it the best we can. I think we really did it!!!!

There were two demos recorded after your first album, was any material from those used on "Fake"?

All the material in "Fake" was born about 7 years ago starting from new riffs and material. We like the songs very much in our demos and it's very possible we'll play something live in the upcoming shows.

The premiere of the new album is behind us and the fact is that it is getting an enthusiastic reception. How do you feel about it, is it anything you expected? Are you pleased with the reaction the album is getting?

The album was required from friends and fans (we have a history in Italy and played everywhere during 30 years of music) so it's a present for us and for them. Moreover, "Fake" has been welcomed by press and fan in a great and cool mood. All the reviews are wonderful, and we enjoyed our moment so much. We strongly believed in the quality of the songs we were going to record but feel the comments of people is always the marker of the truth.

To me personally, one of the most impressive things about the album is its unrelenting aggression and atmosphere captured in Cruentus' sound, how satisfied are you with the end result of the recording and how album presents itself?

When we recorded "In Myself", first of all we were young, but we had a lot of influences and a big desire to create something new and different from the usual way to play death-thrash metal. I know we did it in a good way because that album became a sort of mile stone in the underground scene. Experimentation of sounds and people during the years, took us to the point of beginning. We came from Slayer, Testament, Entombed… where compromise was not contemplated!!! "Fake" is an album with non-compromise as us as men of 45 or more. We find our way of life and "Fake" is a part of it.

"Fake" is the name of the new album and I believe it's a bit misleading since there is nothing 'fake' about it (laughs) What is the story behind title, how does it correspond with the album cover? Can you please tell us about the choosing of an artist, the artwork itself and the whole process?

"Fake" is a current word, especially in our country…..but i believe Americans and the rest of the world are doing their best…..(laughs). Social media are full of fake news and politicians build their strength often using fake news. The meaning we want to give to this word is wider. What appears is not the truth. This is the main meaning of "Fake" for us and the cover shows it quite brightly. Who is bad between a wolf and a sheep? A sheep is a pacific animal, but we say someone is a black sheep if he doesn't conform to the rest. The wolf is bad since you were a child but is a wonderful animal who lives in community, respecting the oldest of the herd, growing puppies with love and attention. This is the fake we all live inside and outside. Also, the use of Black and White is a call to the Tao symbol viewed from our perspective. The good is in the evil and back. We choose the artist surfing in the web. She's Mariarita Renatti, an artist from Naples, who work only with black and withe using pen on canvas or paper. We contacted her for the first time during last spring and she was really happy to join us in this project. The artwork is Antonello's who work hardly to construct the digipack choosing easy images but with a deep power.

Tell me a little bit about the lyrics on the new album, are they black or more death metal, is there a common subject, who is responsible for lyrical layer?

I wrote all the lyrics of this album. Some of them are quite old (about 20 years) others are born with these songs. The title of the album come also from the content of the lyrics. I speak about human soul and its contrast, its duality within, the fight between light and dark, always seeking for the truth. I ask myself and ask to the reader of the lyrics: where is the truth? Do opposites really exist? I don't have the answer because everyone has its own truth.

Are lyrics important in metal?

I think they're very important and I often choose to listen to a band starting from the lyrics. And when something in a lyric should be misunderstood I try to examine deeply the words and understand where the band come from, their history and biography. The best example I can do to explain is Slayer. Some people thought they were Nazi, but they just tell stories who give power to their music. We love them.

You've been around metal for a long time, are you following world metal scene in any way at the moment? What do you like about it and what do you despise the most; what inspires you and what pisses off the most?

Metal music is the one we prefer to listen to. We listen to historical bands the same we listened to something new. We enjoyed both depending on the quality. The historical names don't always played good stuff and new ones have great ideas sometimes. We have no preferences at all. The only thing I can say is that we don't appreciate black metal, but we respect all the bands. Music is music and everything is the right thing.

What would you say to yourself from 20 years ago if you had the 'Back to the Future' moment and could do it?

Believe me, I wouldn't change anything. Our path is honest and clean. No remorse and no regret.

Looking back at the time spent with the band and around music what is the most important thing you got from it and what will you take away from it when done?

The music and, more, playing in a band give us the possibilities to explore the reality and live it with a tool to survive in a world we didn't like. Our rage found a way to be showed and maybe it defends us from delusions and sadness.

What would you like for people to take away after listening to Cruentus?

Above all: the attitude. We play and go on stage in the same way we did 25 years ago. I think it can be felt listening to "Fake" and coming to a Cruentus live set. We are the same persons in life, in studio, on a stage.

That is all I got. Thank you much! Last words belong to you!

Thanx to MetalBite for the kindness an interest in us.