Sirenia is no new name to the wails of symphonic metal, in fact their status is notorious, given most of their work is considered of highest quality, despite how some fans and supporters may feel with the frequent, though circumstantial replacement of frontwomen. The beautiful and talented Emmanuelle Zoldan, current main vocalist and front woman of Sirenia, took time out to conduct a brief interview with MetalBite, that we are most grateful for, given Sirenia is of mainstream status – and she could have easily given us the mainstream middle finger. This new era of the band has seen much success, though not exempt from harsh criticism by many who have their preferences and biases - yet Emmanuelle Zoldan unshakably continues to display her remarkable growth and improvement as the current Sirenia vocalist, more than able to hold her own while reaching new heights in her musical career. 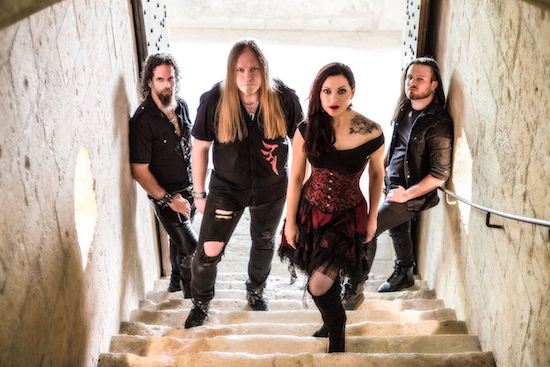 Since being the main vocalist and front woman for Sirenia, what do you think your presence has brought to the band?

Maybe more stability, something stronger in the band relationship.

How have the fans been receiving you?

Very nicely for the most of them, I received a lot of encouragements, love and support. In the very beginning a very few haters came in the way of course, what was expectable, but to be honest I never really paid attention to them, I like to stay away from negative energy. It's only a very few people. The great majority of the fans are showing lots of support and appreciate my work in the band.

The previous Sirenia album "Arcane Astral Aeons" is your strongest recording effort since you started as main vocalist for the band; songs on there are very catchy and memorable ('Love Like Cyanide', 'Desire', 'The Voyage') amazing songs! What would you say was the main reason for that?

Maybe more maturity, experience with time, confidence… This great complicity in the band that grew also with the fact of being included/involved in the creative process (French lyrics for me, guitar solos for Nils and Jan Erik) and the amazing rendition of Jacob Hansen's mix.

"Arcane Astral Aeons" came out after some time, after a lot of tours and shows, my place in the band was better built and my confidence had the time to grow tour after tour.  When I recorded "Dim Days of Dolor" it was a bit different, I had less time to go through the songs as the time was very short between my arrival in the band and the album release. It also was more written for soprano voice (Ailyn, who was supposed to record the album) than in the « perfect range » for me as a Mezzo. "Arcane Astral Aeons" has been written for my voice. That's maybe why you have the feeling of a more confident performance on this one.

Did you have any input creatively (album direction etc.) on those records?

On AAA yes (I wrote the lyrics in French on 'Nos Heures Sombres') on DDOD there was some French Lyrics also, but it was some translations of Morten's Lyrics.

Thus; would you like to have more creative freedom for future Sirenia albums?

I am a creative person, I need creativity to feel alive, so, of course answering negatively would be a lie :-) Creation is the more exciting thing in life for me.

On that thought, is there any new music in the works or completed?

We are working on a new album right now that will probably be released next August. This will be a great album. Morten is still evolving a lot in his creations and reaches a higher level, album after album.

Looking forward to sharing it with the fans :-)

What are some of your favorite songs to perform live from both of your debuting albums as front woman for Sirenia?

The new songs are of course more adapted to my range as they have been written for me, and most of them are sounding really powerful on stage ('Dim Days', 'Goddess of the Sea', 'Into the Night', 'In Styx Embrace', 'Asphyxia', etc.) but some of the older songs are fitting to my voice too, and I love to perform 'The Other Side' for example or the powerful 'Path to Decay'.

When performing old songs from the Ailyn and Henriette eras, how do audiences respond?

Most of the time I have really good feedback, people saying that they love the more powerful version I give to the songs; of course, I suppose there will always be people disturbed with hearing another voice on songs they are used to. I can understand that :-) the human ear is easily disturbed by something unusual, especially with the voice.

Do you think you give good renditions of earlier material?

Hard for me to answer this question, what I can say is I always do my best to sing them with my own personality and sensibility, maybe mine is darker than the previous singers, I never try to lie in imitating Henriette, Monica, or Aylin, I just want to be myself.

I understand you were originally a choir member in Sirenia before being tasked with the role of fronting the band; what was your reaction when approached?

I have always been hired as a soloist singer, and consider myself like that, in every area of my music engagements; Sirenia was probably one of the « extra » employment I did as a choir singer. So, I never really had the feeling of "becoming" a front woman, it's what I already was. (Opera and other rock projects). But becoming this way more involved in Sirenia was exciting, because Morten has been a friend since 2003 and I followed his evolution through the years with a great attention and interest.

Can you give an account of how you became a contributor/generally involved with Sirenia?

With all these years, we have become more than a band. We have been through many things, Morten and me, and the tour life built a solid friendship with the guys as well. We can talk about everything together, built together, talk about the future objectively, there is a great confidence between us that helps a lot to make the band grow.

Do you feel pressured having to fill the shoes of past Sirenia front women?

I never really felt pressure on this project. Of course, it's easier to come with your own band and songs to be accepted by people than replacing other singers who already have a fanbase; you need to convince that you can do the job with your own qualities. It's not an easy challenge but I came as I am, never trying to imitate. I don't consider that I'm a replacement, but more the new face of a new area. I don't have to fill someone else's shoes because I brought my own shoes :-)))

Are you in any way/s influenced by former Sirenia vocalists?

No. They are all great, but it would have been a mistake to try to reproduce what has already done; there is no interest in a singer changing her ways, if she does the same than the previous ones did.

I appreciate every one of the previous singers, each quality, each sensibility and voice colors, but being influenced would have not been constructive. I had to bring something else, something new. My own universe and inspiration.

What propelled your interest in metal and at what age did that begin?

When I was a teenager I listened to more pop, rock and progressive music (big fan of Queen, King Crimson, Rage Against the Machine,), a lot of classical music, but I also some metal bands with Korn, Metallica, or My Dying Bride. I came more deeply in it when I became to record with metal bands from 2002 and better discovered the genre. I love what metal reveals of my dark side. :-) I like different kinds of metal, and especially progressive metal. 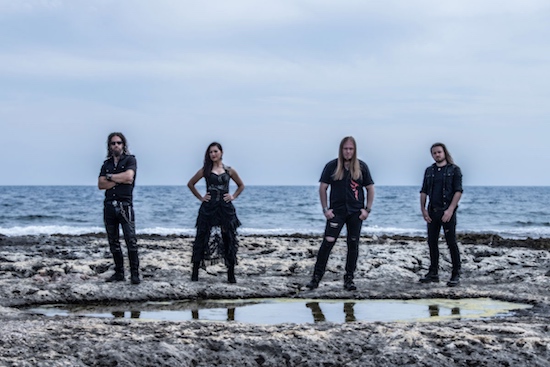 Apart from symphonic metal, are there more extreme forms of the genre you are interested in?

I try to open my mind to a lot of different things. Even the kind of things I'm not necessarily firstly attracted by; it's always interesting to pay attention in what every genre has to say. As I said in the previous question, progressive metal is probably my favorite in metal genre with symphonic, I'm a lover of melodies and complex/experimental compositions, but I also like to listen to more extreme things.

Does your musical skill extend beyond having such beautiful vocals to playing instruments?

I play the piano since my childhood, I also had a short experience with drums as a teenager, and I'm planning working on bass very soon :-)

Apart from once being in the choir for Sirenia, were you crafting any work for a solo project or thought of doing so?

I always did (and still do) solo projects in different genres: opera, rock and other genres, and lots of recordings.

Is there anything/s you wish could have been done differently in retrospect where the past 2 Sirenia albums are concerned?

Not really, I always try to put my full heart in what I do in the moment I do it, so I guess I always do my best at the moment;  I'm someone who likes to look ahead, what is done is behind me, I always focus on next projects;

What are some of your methods for maintaining such a healthy and beautiful singing voice?

Thanks for the compliment :-)

There's no secret, a healthy voice that perdures over time needs to be preserved. Having a good sleep is probably one of the most important things, good hydration, regular training, strong technic to be able to resist to long tours within the voice is extremely solicited, no smoking, eating healthy to avoid gastric reflux that damages the chords, learning not to push on the voice when you're tired, etc.

Given you can sing both cleanly and operatic which style do you prefer more, particularly for Sirenia?

What I like is precisely being able to switch from one style to another. This versatility is what I like the most.

How has touring been thus far with the band?

We have really great times on tour. By the time one is finished, we already are looking forward to the next one.

How's your relationship with the rest of the band members?

We all are very close, there's a big complicity between us, great communication. It is something very important in the band. We miss each other as hell when a tour is finished.

Thanks for taking the time out for this interview with MetalBite and best wishes for any new Sirenia material that may be in the works. Anything you'd like to tease or tell the fans?

Thank you. What I can say is: be ready for this album, believe me, it's gonna be a blast! :-D haha