Just hours before official release of "Illuminati" I had a chance to have a quick talk with Henri from God Dethroned. There was so much more I wanted to ask but I had to keep myself in check and try and ask about their new album mostly. It worked for the most part but we also talked about couple other things that you may find interesting so click on that play button, listen to the music, watch the videos and keep reading to see how it went. 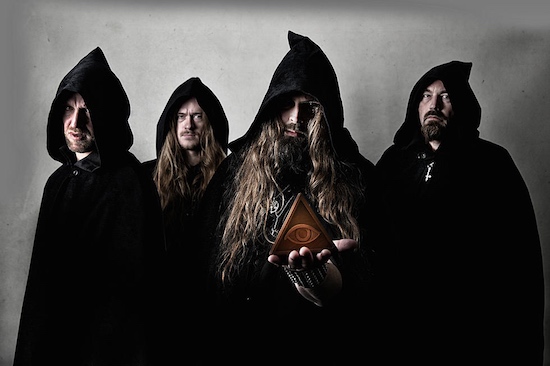 Hi Henri! To start our conversation on a positive note I'd like to say thank you for doing this interview with MetalBite and also that your newest album kicks major ass!!! LOL. How's everything going, how are you today?

"Illuminati" release date is only days away so let me ask you this - how's the excitement level, do you think that you're going to surprise people with the new material?

Yes, it's getting close now. I'm excited, because the response from the press has been totally awesome! Hopefully our fans feel the same about our new songs. I think we have some quality music with nice surprises in store for them so all should be good.

What can head bangers expect from the new album, what's un-expected on "Illuminati", what are the biggest changes you've implemented?

Everybody can expect quality songs with catchy tunes in a dark atmosphere. We experimented a lot with additional keyboards. Don't worry, GD is and stays very much a guitar-oriented band, but we added many layers in the music with keyboards, just to enhance the atmosphere and make the music more bombastic. We also added lots of vocal additions like choirs and singing and grunting at the same time, this also makes the songs deeper and more interesting.

3 years passed since the "World Ablaze" and now "Illuminati" is about to be unleashed. How different are those two albums in your opinion?

On "World Ablaze" we did the exact opposite compared to "Illuminati". We didn't do any keyboards, no special stuff with vocals, just straight forward. That also turned out very well, it's just more basic.

2017' "World Ablaze" finished the WW1 concept series and I'm probably not the only one wondering if "Illuminati" is a beginning of another concept idea for a few albums or is it a 'single shot' for the time being?

We did 3 concept albums about WWI and that was more than enough. It's not so easy to write concept albums let alone doing 3 in a row. With "Illuminati" I was finally free again to write about whatever I wanted. Our fans had suggested for some years to go back to the old Occult and Religious themes, so we did that. We just added freemasonry and the "Illuminati" to the concept. We'll see what the future brings. First we want to promote this album as much as we can.

I didn't let anything influence me during the writing process. I noticed through the years that I write better music when not listening to anything else. I am a big fan of Pink Floyd, but I don't suppose you'll hear that in our music, haha!

Dave Meester is a new guy in the band, did he join in time to help in the making of an album? Mike Ferguson left in the midst of creating new album right? What happened?

Dave replaced Mike for a European tour. We feared that Mike wouldn't join on more future tours, so we decided to stick with Dave. The album was already recorded by then, but we still had time enough for Dave to do his own guitar solos on the album, so he had something of his own on the album and he wouldn't have to play other people's solos all the time. Mike did contribute to the writing and recording of the album and he did a great job, for which we are grateful to say the least.

In the video for 'Illuminati' the creature resurrected from the catacombs kills the priest, why only one, why stop there?? LOL All jokes aside, what is your opinion on the state of catholic church and other religious organizations in the light of the latest discoveries about molestation, rapes and the latest one about the priest keeping sex slaves?

GD has always had lyrics against the church, simply because of all the things you just mentioned. There's abuse of power and sexual abuse committed under the protection of the church while they pretend to only do good. Our lyrics are a reminder to keep your eyes open and beware of their tricks.

At the end of the second video you return the creature to the same catacombs. Is there a continual story, a concept, a common subject going throughout the whole album? Can you tell me about the lyrics?

There's no specific concept on this album. In this case we chose 3 songs of which the lyrics could be processed into videos. For some songs that would have been too difficult. The videos are interlinked where the video for 'Spirit of Beelzebub' is actually the prequel to the video for 'Illuminati'. In 'Illuminati' the priest is a child molester and is being killed for it. In 'Spirit...' the devil appears in female form.

How much research (if any) did you do before writing "Illuminati"?

I just read as much as I could about the "Illuminati" as I could find. They were a society who were secretly fighting against the current reigning religions of their time, simply to have the freedom to read whatever they wanted as this was not possible. The hype around "Illuminati" was created by writers later on.

What is the meaning behind the title of your latest album? Whose work do we see on the album cover and how does it correspond to the lyrics and music?

It is our view on the world and the practical way of changing it, if it were ever possible. The artwork is done by Michal Xaay Loranc, a guy from Poland who created the album cover. It shows a vortex of souls. He later told me it was the most beautiful artwork he had ever done in his life.

You are back with new album that is heavy, brutal at times yet packed full of melodies. Are you excited for people to hear the new material, go on tour and start playing some songs live, which ones did you choose to play first by the way?

Yes, we are excited about it for sure. We will play 4 songs of the new album live to start with. Those will be 'Illuminati', 'Book of Lies', 'Spirit of Beelzebub' and 'Gabriel'. Then later on we may change some of the songs in the setlist and play some of the 4 remaining songs. You never know upfront which songs turn out to be the most successful ones on the album. Sometimes it even surprises us!

We always play 'Nihilism', 'Soul Sweeper' and 'No Man's Land'. They are both band and fan favorites.

Of course, we change the setlist from time to time to keep it interesting for us and the fans and there's enough to choose from, but some songs are considered classics by our fans, so we have to play those.

With services like Spotify, YouTube, Bandcamp and others some people seem to prefer individual tracks rather than full albums. When you're listening to the music do you listen to your favorite tracks or full album? Are you using any of the platforms I've mentioned?

I am a person who likes to listen to an album. The buildup of the album is with reason and it listens pleasantly in my opinion. But I am aware of the fact that many people just listen to a couple of songs of an album and some songs will hardly be discovered by certain people. Maybe in the future bands won't make albums anymore, but just release singles online with videos to support them. I think that could work too. We use Spotify and YouTube as well.

What have you been listening to lately, are you a vinyl collector or more of a CD guy?

I am a vinyl collector, but also still a cd collector. The band that excited me most lately is a band from Germany called Temple of Dread with their debut album Blood Craving Mantras.

What inspires you to write music and why do you think that is?

I can't explain really. I knew I wanted to be a musician when I was still a young lad and I've been writing songs since I was like 15 years old and it never stopped and maybe it never will.

Aside from musical inspirations what is the biggest reason that pushes you to create your own sounds, what other aspects of life or art give you the strongest impulses to write music?

I just try to write music that's interesting to listen to. To be completely original is almost impossible, so it should be interesting at least. We mix death and black metal together in a way not many other bands do. On the "Illuminati" album we also went beyond the realms of death and black metal, but people will have to take the time to listen to our music to tell if they feel the same and/or like it in the first place. Some things can't be described in words, but just have to be experienced simply by listening.

What was the best musical advice you ever received and who was it from?

It was from the guitar player from the band Focus. He said, write music that comes from the heart and when you like it, then you can assume that other people will like it too. It's a big help to set aside doubts about your own creations, haha.

Who were your musical hero's when growing up?

More than 20 years on the same label is not something that many bands were able to pull off. What is the secret to such a good relationship, did you ever have thoughts about leaving?

We signed to Metal Blade in 1996, so this is the 24th year. We wouldn't be here today without their support and no, we never thought about leaving.

Almost 30 years since the band started. How do you feel about what you've achieved, what do you remember as best that happened and are you planning to top that?

I'm proud of what we achieved and that we are still here. There's not much we haven't done, and it will be hard to do better than before, but as long as we're having fun we will continue. We will have a big party later this year where we will perform with former musicians and make something really special out of it.

You've mentioned in one of the interviews that one of your favorite shows is "Vikings" series, what are your thoughts on the last season, what is your take on how it's going to end?

I have been so busy since last year that I even haven't seen last season yet! I have some catching up to do I guess. There's a lot of stuff that I like, but I hardly have time to enjoy it because there's always something going on in my life.

That is all I got. Last word is yours.

Check out "Illuminati" and our videos. We come by to play a show near you soon!