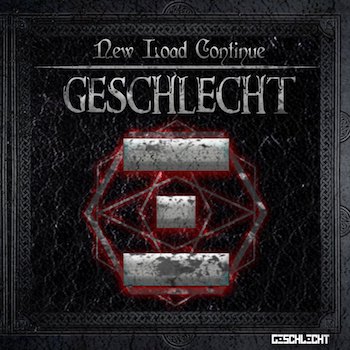 Video games gel well together and Italian groove metal band Geschlecht understand that. The Italian squad had already begun making massive strides with their debut self titled EP "Geschlecht"; thus in an attempt to develop their music and theme, the band almost 3 years later have designed a record that encompasses that feeling of getting totally immersed within a video game through crafting a story one could find some realistic suggestions in. That appears to be the aim of Geschlecht with their debut full length record, "New Load Continue". Many of us probably remember that one video game they were glued to at some period within their adolescence or childhood, it was the game you would go to bed contemplating how to beat any tedious level without outside help; only pussies used cheats and exploited glitches. Though each stage presented an even more towering quest, you persevered because bragging rights were considered golden in those days.

Geschlecht to an extent is able to arouse those nostalgic moments of trial and conquest in video games and eventually life through their latest record "New Load Continue". Produced by Richard Meiz, member of the legendary Lacuna Coil and Genus Ordinis Dei, professionalism meets the ear immediately through a quality production capturing the output of each instrumental detail and clarity of the vocals.

At the loading screen were greeted by the theatrical music of 'Geschlecht', creating precisely what most gamers would identify as menu music which bleeds into the metal; and with the introduction of some chugging guitars the quest "to break the curse that plagues the 5 great warriors of the game world" commences. 'Cursed' appears to be a reference to the spell under which the "5 great warriors" are burdened by; hence it is only wise the musicianship emit a feeling of gradual enfeeblement and such is the case through the aid of the guitar leads. As we are on the topic of the guitaring on "New Load Continue", that riff on 'Legion XXI' around the 1:16 and 1:57 marks sound very similar to that heard on 'Summer Arteries' by Devilment. Also, Sweden's The Unguided quickly comes to mind in terms of the tuning and some note patterns utilized.

A stroke of classy retro gaming is enlivened, resurfacing the memories of playing Super Metroid and Castlevania even though not being full-blown 8-bit tuning. Hence the feeling of the music is genuine whilst attempting to portray being sucked into a now 1st person mode of an interactive program. Songs like 'Bloodmoon' (a reference to the stone needed to break the curse), 'The Power of Five', 'The Prophesy' and 'Game Over' live up to the task of reflecting a journey, one that progresses smoothly through the combination of Amedeo Fianti's vocals, Casalade's guitars, Edoardo's bass and Fabio's drumming. Power metal, progressive metal, deathcore and folk metal elements are detected on "New Load Continue", and its with this multifaceted approach Geschlecht are able to keep the music or in this case the story moving without stagnation.

The band's melodic hand does the trick in presenting the current atmosphere thus representing the idea behind each song title that when examined could be seen as a new phase or chapter of the story. Moments of victory, downfall, loss, revival and regret transcend to real life, making "New Load Continue" more than a record representing virtuality; hence It could be interpreted as picking oneself up after failing and adopting a new approach to trials or difficult times. In addition to the music played by Geschlecht, the duality of "New Load Continue" is perhaps the aspect 2nd most appealing to me; taking a concept of virtual immersion to carve an abstract mirror of reality is an awesome idea, something I hope Geschlecht continue to incorporate into their music.