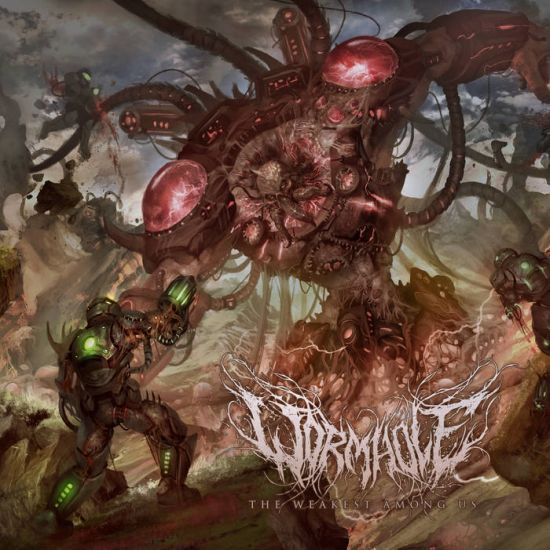 Tech and brutality aren't combined as often as you might think nowadays. At the turn of the century, it was more common for them to be intermingled because both styles were coming into fruition, but now that death metal's been spliced into fifty different sub-styles, it's more common for one particular sub-stratum to be embraced: take Equipoise and Obscura going exclusively for the melodic Necrophagist noodling angle, literally any band that gets featured on Slam Worldwide embracing, well, slamming, or Maggot Stomp death metal now starting to codify itself. Usually it makes sense to focus on one piece of the death metal puzzle in order to avoid sounding too haphazard or disjointed - occasionally there are bands that can combine the noodling with the "brutal" vibe of death metal and feature both equally, but they don't seem to last long (Severed Savior, Spawn of Possession, Anata), or they just fall into one of the sub-styles eventually and/or taper off in quality (Decrepit Birth, Defeated Sanity). Long story short: it's hard to find "technical brutal death metal" that is both techy and brutal to equally punishing degrees.

Wormhole's previous album, Genesis, could firmly be placed in the "slam/brutal" category. While having a fair deal of speed mixed with some solid, fat slam grooves, the riff intricacy wasn't where it needed to be and the fact that it featured the Vulvodynia vocalist didn't help move the needle to the tech side. Good for what it is, and it's likely more appealing to bros who are all about the chonk, but personally I was pretty lukewarm on it when it first came out because despite it sounding really big and spacey, all the cosmic suffocation ultimately felt empty and none of the riffs stuck around. Groovy slams, sure, but there's a million albums out there with 7/10 slams and chromatic scale chugs. When The Weakest Among Us popped up on my feed, I had little more than a passing curiosity about Wormhole, but I gave it a shot because it did seem like a lot of people were recommending it.

The first riff was really important in locking me in for the long haul with this one. First impressions are made quickly, which is why it pisses me off that so many bands do throwaway intros to their albums. The title track begins with a riff that has a gorgeous Muenzner-esque wank melody as the punctuation mark that instantly lets you know the Kumars stepped their game up, which they slowly deconstruct into a slam and reconstruct back into the opening riff. That they do it coherently within a few minutes’ highlights Wormhole's mastery of dynamics and fusion of different themes into something that is coherent, while having the best elements of melodic virtuoso death metal and slam thuggery. The way each piece is distinct yet effortlessly blended into the fabric of the album is not only impressive, but quite fun to listen to: Fallujah-esque atmospheric deathcore twists into a blistering melody, the speed and layers always dissipate right before the big slams come in to make them more of a focal point, and even the slams themselves have many different distinct ways of "grooving" that Genesis straight up didn't have at all. The expansion in palette between albums could be likened to Tomb Mold's growth from Primordial Malignity to Manor: you can tell it's the same band, but the greater attention to detail in the songwriting and use of a greater variety of riffing techniques makes it impossible to consider the predecessor to be the superior album. The Weakest Among Us has exactly what Wormhole needed to get better.

As much as the string section needs credit for diversifying their chops, I gotta give a lot of credit to the newcomers on The Weakest Among Us. Matt Tillet's fill placement and use of offbeats to emphasize note changes in the guitars give this much more staying power and creates a lot of really memorable moments in each song, a vast improvement from the robotic blasting on the last full length. Vocals are generally interchangeable in this style, but when compared to the debut full-length they're much more tastefully subdued in the mix and let the riffs do their thing, which is good because the riffs are doing more things worth paying attention to. It's strange, because their original band Cognitive didn't do it for me - while musically efficient and skilled, none of the riffs stand out. Perhaps the vocalist and drummer are just good utility members and they click when combined with the right vision. The Weakest Among Us has such a complete and fully realized vibe. Wormhole merges tech noodles and disgusting slams so seamlessly that they can throw flourishes of progressive melody, prominent bass noodling and the occasional sample into the mix along with all of it and every little garnish further supplements the ride.

Wormhole may have successfully contributed a true entry to the rare "technical brutal death metal" genre, but The Weakest Among Us shares more similarity to bands like Archspire and Vulvodynia than it does Severed Savior or Deeds of Flesh. This is 50/50 modern melo-tech-death and modern slam. It's as if all the death metal subgenres fused together, separated in the 2010s, and now they're all coming back together again. If you're like me and like your brutal death metal to have a little atmosphere and a few moments you can vibe out with as opposed to nonstop pummeling, The Weakest Among Us is a treat. It's a short, slammy and varied punch to the gut with a lot of catchy noodles. The bar for brutal tech in the 20s has been set, and it's a pretty high one to clear right off the bat.