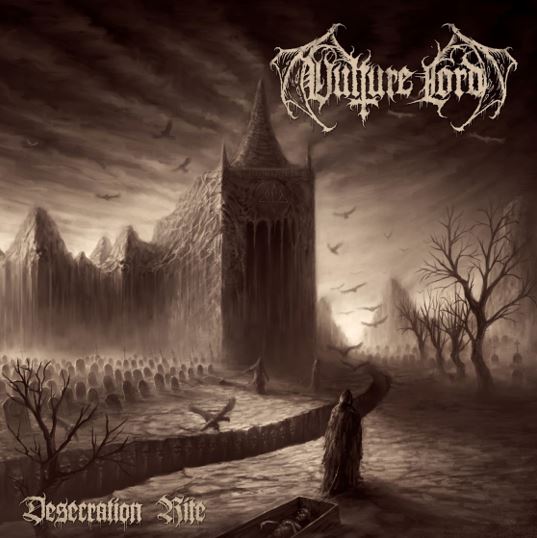 Norway is, in union with Australia and Germany, the global black thrash hot spot. But usually, the bands from the top of Europe deliver a very filthy form of this bastard genre (which, of course, has to be pretty dirty by definition). Aura Noir, Nekromantheon or Deathhammer can tell you more about this fact. Now we have the option to celebrate the return of Vulture Lord, but these dudes do not fully share the musical approach of their countrymen. Desecration Rites, ornamented with a very stylish artwork, presents its material with a nearly hygienically clean production. Thank Satan, it does not fall victim to sterility. There is enough power and directness to create a lot of pressure and cruel vibrations. The longer the album lasts, the more I like the brutal guitar sound and frankly speaking, I do not miss the unwashed stuff of the aforementioned bands here, although they are also champions in what they are doing.

Vulture Lord have penned an album that opens all floodgates after the stupid intro. Wave after wave floods the listener and all of them taste like bitter, bloodthirsty blackened thrash. No doubt, the visual aspects of the release rather appeal to the black metal community. The same goes for the lyrics and the vocals. The thrashing component is delivered by the merciless riffs – and the album is filled to the brim with razor-sharp guitars. Finally, the breathtaking speed of many parts unites the black metal followers and the thrashing legions. Under these prerequisites, there cannot go much wrong. Consequently, it does not matter which song one picks out. They all have something to say. The apocalyptic howling at the beginning of 'Bloodbound Militia', the hellish and sharp riffing of 'Stillborn Messiah', the slowly growing intensity of 'The Vulture Lord' – each and every outburst of musical violence has its (very) strong moments.

Given this situation, we can be sure that the next full-length (in 2039, if they do not increase the frequency) will be another monument… or maybe not, because almost all pieces have been penned by Nefas (R.I.P.). He died already in 2012 and I do not know why we had to wait almost a decade for his sonic obituary. However, we can be curious if or how the story of Vulture Lord will go on. Or we do nothing but enjoying Desecration Rite - just listen to the pretty insane leads of 'Beneficial Martyrdom', to give you another example. As mentioned before, the quartet is able to preserve the high-quality level that the first tracks offer. Small deficiencies like the somewhat fatiguing vocals or the absence of an absolutely outstanding killer do not have a significant impact on the overall result and therefore I am simply glad that we have received this almost barbaric statement from Norway. It’s a precious antidote to the last works of the country’s yesterday’s heroes. Eternal hails to those who once made great albums, too bad that now they just wallow in the turbid waters of a stylistic mishmash. Not to mention freaks like Borknagar or Enslaved who have cut their roots completely, if I am not mistaken. But maybe the Vulture Lord has already mobilized his flying army and his birds are circling over the aforementioned secessionists. Enjoy your meal!

The Norwegians of Vulture Lord are finally back. After the album had been announced several times, (but was postponed again and again) the time has come. After the death of their guitarist Trondr Nefas, who was also active with Urgehal, Beastcraft etc., the future of the band was uncertain. The new album Desecration Rite still features singer Sorath Northgrove from the old line-up but all the other musicians have joined in 2019. They also have quite interesting band biographies, including members of Carpathian Forest, Endezzma, Beastcraft and Urgehal who have unfortunately disbanded due to the above-mentioned fact.

Apart from the new line-up, the logo has also changed significantly and the quality of the cover is much higher (but no longer in BM-typical underground style) than that of the last album Profane Prayer. What strikes me directly is that the production has improved remarkably. The sound is much warmer, clearer and no longer as wooden as on the predecessor. Musically it can be said that not too much has changed. If you like the bands mentioned above and also liked Profane Prayer, you won't go wrong with Desecration Rite. Furiously fast Norwegian black metal, which is mixed again and again with cool riffs and catchy parts.

'Bloodbound Militia' starts with a cool Slayer memorial riff before the typical fast BM guitar riffs accompanied by blazing fast drums kick in. 'Vulture Lord' starts with a very catchy thrash riff. The song stays more in the mid-tempo range and is a highlight of the album due to its accessibility. 'Diabolical Intervention' starts with some punky drums, but quickly turns into a fast black metal hate monger. The way drummer Uruz thrashes his instrument can tell you that he must have had a very bad day here. The following tracks are also very catchy and the band takes their foot off the gas pedal again in places. For me some of the song beginnings are a striking reminder of Slayer or Vader songs and only the last song 'Perverting The Bible' is not so convincing in my humble opinion. Although it starts with the typical BM riffs that we know from the band, somewhere in between there are disharmonic guitar sounds and solos that do not really fit in there. On top of that the song seems a bit rushed, as if the band was only allowed to rent the rehearsal room for 6:16 minutes instead of 7:56 and still wanted to put the song on the album.

My conclusion of Desecration Rite is that the band has presented a good comeback album (although they were never really disbanded) that will not disappoint anyone who likes orthodox Norwegian black metal.