Norwegian Vulture Lord is back. With "Desecration Rite" they deliver a hate-filled, pitch-black album of the very first order, which will not disappoint any fan of the band (review here). After the band has been battered by tragedies and setbacks, hopefully this is the long-awaited new beginning for them. I had the honor to ask front man Sorath Northgrove (thanks a lot for this!!!) some questions via email and learn a bit more about this somewhat mysterious band. 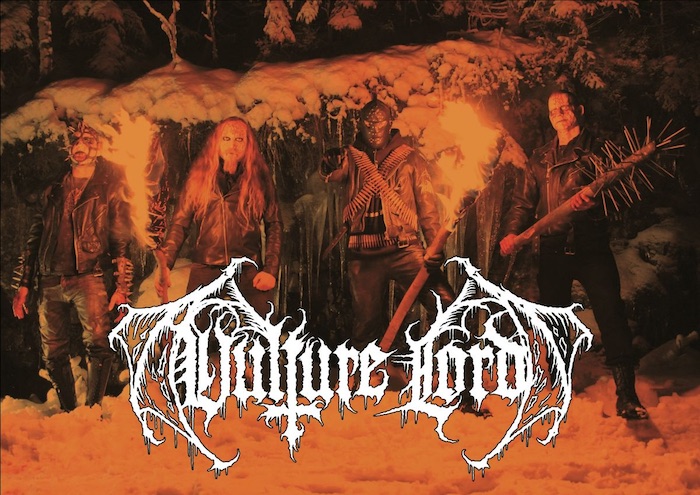 Hello Sorath, how are things?

First of all, congratulations on the new album. "Desecration Rite" was announced again and again in the last years and then not released. What was the reason for the release being postponed again and again?

The main reason is several line-up changes and delays from ex-members that never delivered to set deadlines.

Why did it take so long to create a new album in the first place? After all, "Profane Prayer" is from 2003.

We also had the 4 track Blasphemy EP released in 2006 as well, but the main reason is that Nefas and myself decided to go back to the primitive roots of black metal and created Beastcraft instead. That was our main band together for years. On the side, Nefas and Diabolus still wrote tracks and made demos for a future Vulture album and it's more or less written right after Blasphemy, which was recorded in 2003. 2 tracks from 2003, 5 from 2005 and 1 from 2010, the same time we started talking about starting up Vulture Lord again. It took 5 more years and a death before the plans got in motion and even 4 more years until we started recording. The whole recording process took about 2 years, so we have been haunted by delays from the very beginning.

Apart from you, there is no band member who was involved in the debut. What are the reasons for this?

That is wrong, on the contrary, all the ones from the debut are still involved with the new album. Me and Uruz are still here. Diabolus left but is still playing lead and rhythm guitars on the last track of the album, 'Perverting The Bible', which he also wrote. Everything else is written by Nefas, who died in 2012. Never trust Metal Archives…

Who designed the cover? It looks really great. Can you tell a little bit more about it?

Jorge Vimendy from Sick Graphics designed it. I worked with him from early sketches into the final painting. We mailed ideas back and forth. I wanted an enormous graveyard with a church, all overthrown and enthroned by the Vulture Lord. One can see the church transformed into the lair or chapel of the Vulture Lord, the lord of death, with the vultures circling the sky. The actual Desecration Rite is the figures emptying the graves, unhallowing the ground and throwing the Christians into the Abyss. Really pleased with the outcome, he has the perfect style for it, bringing both new and old cover art styles into the design.

Why did you completely change your logo?

I wanted it old school and showing that it's yet another chapter in the book of the Lord. We had the first one for the demos, the second for the second chapter in the 00s and then the third and final logo in 2020. I got in contact with Benno Meijer after he showed me an alternative version of the Beastcraft logo and asked him to do one for my Deathcibel Productions and Vulture Lord. I liked what he did and decided to merge the wings from DP onto the VL logo.

You call your music death metal, because you think that the lyrics define the genre. I personally feel your music is more black metal, especially when I look at titles like 'Stillborn Messiah' or 'Burning The Kingdom Of God'. Apart from the lyrics, where do you draw the line between black and death metal?

'The Vulture Lord' is a superb song that goes pretty much into thrash metal. What are your main musical influences?

What (apart from the quality of the production), makes the biggest difference between "Profane Prayer" and the current album?

That's the only big difference in my book, but we also had better time in the actual recording process this time.

Are there any plans to perform live, hopefully soon?

Yes, it might happen next year in one form or another….

There are now more metal bands than people in the world. With some of the stuff that comes to my ears, I have the feeling that everyone who can play even one note halfway right is releasing a CD. Quite a lot seems incredibly artificial and not from the heart. What do you think about that?

I understand and share your point of view, but it comes as no surprise in this digital age. You can produce and release your song, album, music, video, whatever, from your own living room. Drum machines can easily be taken for triggered drums. The true metal feeling is compressed to soulless copies of weak plastic.

What principles, what attitude to life do you personally represent?

You are all also active in other bands. Is there any news to report from there regarding new albums?

Ulvehyrde has just released the debut album, Hagl is working on the next and we just talked the other day about reincarnating Faun again for a proper release.

The last words are yours!!!

Thanx for your support. Stay true to the underground and hail the fire!