Enforced from Richmond, Virginia recently released their second very compelling album "Kill Grid" via Century Media Records (review here). On "Kill Grid" they offer a mixture of pretty uncompromising thrash, hardcore and Crossover, which knows how to convince (at least for me) and was also the reason enough to ask the band a few questions and get to know them a bit better. I sent guitarist Will Wagstaff some questions by email and got some interesting answers. Thanks a lot Will! 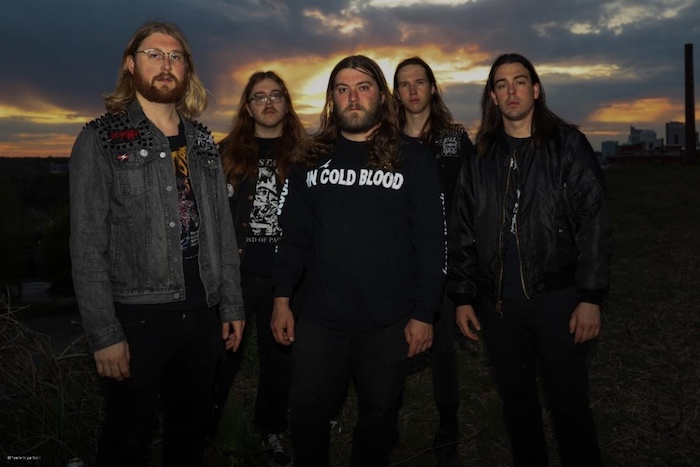 Hello Will, how are you?

You recently released your new album "Kill Grid" via Century Media. How did it happen that you were able to switch to such a big label so quickly?

We were so fortunate to be noticed by a label like Century Media. I am not sure exactly, but I do know that we are a band that works hard, we try to always keep our nose to the grindstone, achieve our goals, and never stop pushing forward.

Until this album you were more known in the underground. Maybe you can introduce yourselves to our readers a little bit more.

My name is Will Wagstaff, I play guitar and do a lot of the writing of the music. I am a painting contractor in Richmond, VA, and am originally from Roanoke, VA. I love to do contract work, play guitar, listen to metal, mess around on my trucks, and travel/tour with the boys.

Musically you play a mixture of thrash, hardcore and a bit of crossover (although I only marginally feel that way). What are your musical sources of inspiration?

In which musical category would you classify yourselves?

On the new album you play very aggressive songs throughout. Don't you ever feel like composing a slower piece? Maybe something with keyboards?

There are synths on the new record, the beginning of KG (Kill Grid; M.) has synth parts on it, and so does The Doctrine. I think there is room for keyboards in our music, but we are not going to be doing any Nocturnus type shit.

Lyrically, your album is primarily about war and violence. The expressive, short titles like 'UXO' or 'Blood Ribbon' fit to that. Was that intended, to use short and powerful titles?

Yes that was definitely in Knox's mind - I'm sure. Kind of like the band name ENFORCED, short, simple, to the point.

Where did you get the ideas for your lyrics? I would guess TV documentaries in parts…

Knox writes most of the lyrics and I know he studied history in school. He loves to read and plays a ton of video games that help him in thinking about lyrics. We will also just take inspiration from events going on around us. A lot of times Knox will write stuff that we don't realize at the time, but ends up being somewhat of a pointed statement. For instance, he had written the lyrics for 'Kill Grid' (the song) prior to a lot of the civil unrest occurring in the USA in 2020. Later when all of that stuff was going on it was like, "Wow Knox did you like to see this coming?".

What are your plans once Corona is through? In the USA that will probably be 100 years sooner than here in Germany, when I look at the vaccination rates.....

Yeah we are hoping we can resume shows once the majority of folks feel safe enough to come out to shows! We want everyone to be vaccinated if they wish to be and to be able to come to a show safely.

Thanks for the interview, hope to see you on tour!!!!