Less than a year after their first release, the self-titled EP, 10,000 Years are back with their first full length titled "II". Picking up right where the EP left off, "II" continues the story of the ill-fated Albatross-mission and its exploration of time and space through a skull crushing mixture of stoner, sludge and doom metal. Check out what Alex Risberg (bass/vocals) had to say about the band, new record and the making of "II". 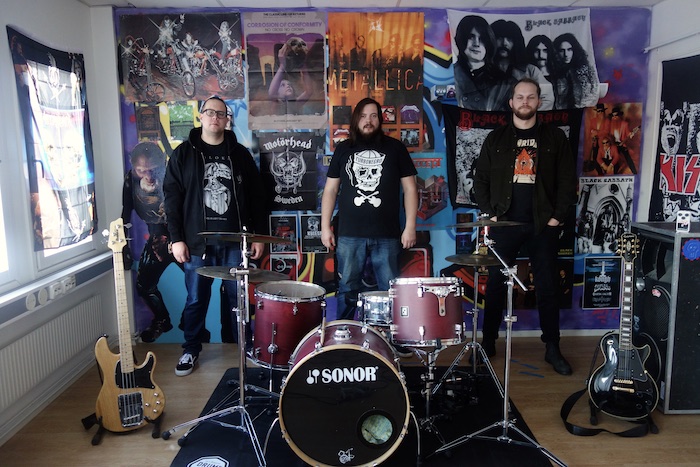 Thanks for taking time to do this, how is all right before the release of the new album?

Things are good! We're really stoked about this album and we can't wait for people to hear it and to share it with everyone

Haha, there's really no big story behind it. We we're thinking of a name and a tradition in the doom scene is to name your band after songs by your favourite bands. As we absolutely love High On Fire, one of our favourite bands since forever, I looked over their catalogue and thought that 10,000 Years would make a cool, different name for a band, so then we went with that. It was High On Fire who inspired it by writing so fucking crushing music.

"II" comes out June 25th, how long did you work on it? Can you tell us about it, about the recording itself, and how satisfied are you with the outcome?

The new record didn't take that long actually. We released our first EP back in July 2020 and then we were already writing new stuff, so we had all the songs that make up the new album done probably by autumn last year. Then it was just a matter of rehearsing them 'til they were second nature. Then we hit the studio in February and banged the whole thing out in, like, three days. We work according to the Black Sabbath-method. We're extremely happy with how the record turned out. It's absolutely brutal. We couldn't have asked for anything more.

It's really a continuation of the EP both in terms of the story and the music. It's a bit more dynamic in terms of songwriting and the whole ride has a bit more twists and turns, it keeps you on your toes while you also recognize the band and the sound. They can also expect that the head that does not bang, will bang.

Is there a hidden meaning behind the title?

There's no deep meaning here, it's called II because it's our second album and it's a sequel to the first one. The story of the ship "Albatross" and the adventures of the crew continues.

It was really no different from the first record. We just try to write heavy songs that riff for days. Songs that we like and would want to listen to. The main inspiration often comes from ourselves, 10,000 Years is based on a science fiction concept involving wormholes, interdimensional travels and ancient gods and beings, so we often come up with a cool concept or plot point in the story, even just a title, and then we jam out on riffs that we feel fit that title or concept.

Hmmm... Not really. I mean, we all listen to so very diverse kinds of music, it's not all heavy doom and gloom the whole time. Like, when we're in the studio we never listen to metal, it's mostly The Band, JJ Cale, Leonard Cohen and stuff like that. But when it comes to making music for this band we kind of know what framework we want to adhere to, so it doesn't really matter what other types of music we listen to.

Some guys out there like to put tags on bands and so you ended up with 'stoner metal'. Are you ok with it?

I don't mind it. It's a good tool to use to find your bearings and stuff you might like. But at the same time, it's all just music. The important thing is if it's good or bad music.

It means heavy music with massive riffs combined with groove and a bit of tempo. I think, haha.

When you sit down to write, who do you write for?

We create for ourselves. We've been lucky enough to have other people dig our stuff as well, and for that we'll always be extremely grateful, but we would be doing the exact same thing even if no one else cared, because we care. This is what we want to do, what we want to play and listen to.

I don't know if we expect anything from the listener more than to listen. If anything, I would want the listener to have an open mind and to hopefully agree with us that our music is worth their time.

We play because we love it. If the resulting music builds or destroys is an inevitable side effect either way.

Go insane, probably. I mean, if I couldn't play music I would survive, even if it would suck. But if I couldn't even listen to music, then just end me, please.

Where do you see yourself and the band in next 5-7 years, is there a plan in motion?

We didn't start this band to become famous or big. We do this because we love it and because we wouldn't want to do anything else. So, we can express ourselves in the heaviest way we can imagine and to do it with good people. So, we'll probably be doing the exact same thing as today. There's no big masterplan behind us.

Ok, we covered past and present. What are the plans for the future?'

The plan going forward is to write the next record, which we've already begun doing. And hopefully we can come out and play a few shows soon as well.

Nowadays most of the labels and bands release their new material on CD, vinyl and cassette, which one do you prefer?

I love physical media. Personally, I prefer CDs but appreciate both vinyl and tape as well. I tend to gravitate more towards digital media these days for my own collection, but that's mostly because I have limited storing capacity at home. That doesn't stop me from still buying A LOT of records though! Haha!

No problem, thanks for having us! Hail the Green King!