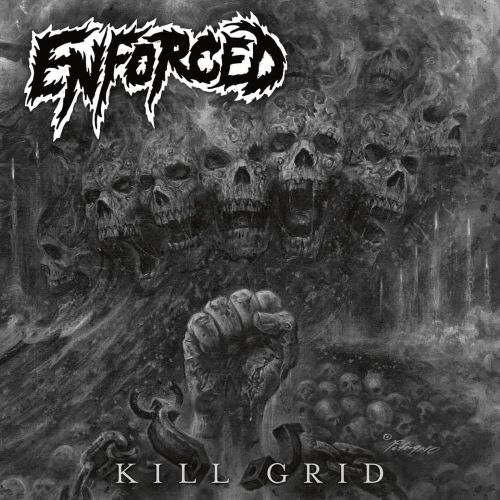 If you grew up in the western part of Borken-Brooklyn (Ger) like I did, you are used to getting into a fight just like that, for no particular reason, even if you just want to enjoy the birds singing on a park bench. The musical equivalent for such an everyday situation is the new album Kill Grid by Enforced. If the first album At The Walls was already a pretty rage-filled thrash album, the guys from Richmond have added another shovel of rage with their sophomore release.

The album starts with a Slayer-like riff that unfolds more and more and develops into a real thrashing in the course of the song (in the further course of the CD Slayer homages occur again and again in the songs). However, this does not mean that the band sees itself as a mere copy and paste Slayer band since they definitely manage to set their own trademarks. Thus, hardcore and crossover influences (especially in the vocals and guitars) are used again and again. All in all, the album presents us with modern, mega-aggressive thrash where you can let off some mighty steam. The songs are all arranged at a brisk pace throughout, so you don't have a chance to catch your breath for a moment. But with such an album you don't want that either and it would seem a bit out of place in my opinion.

The production is another plus point with Kill Grid. Everything really fits here like a proverbial fist to the eye with absolutely punchy and richly produced spound. Well, almost everything fits, the cymbal sometimes disturbs me a bit, but that is my absolutely subjective opinion. Another positive aspect is the cool Joe Petagno cover (responsible for Motörhead, Vader, Sodom, among others), which comes along very detailed. You can actually, if you pay attention to it, recognize many loving details here.

To come back to the music, I would like to highlight some tracks in particular. First, 'UXO' is a flawless thrash song that unleashes a true riff storm and more than once reminds you of old Slayer. Knox Colby's voice fits the aggressive mood that the song spreads perfectly. I especially find the slightly groovy passages in the chorus absolutely successful. 'Beneath Me' is a tight song that beats through 2 1/2 minutes and would also have fit on "Reign In Blood". The second half of the song is mega catchy and groovy and sounds very much like a modern thrash! 'Curtain Fire' and 'Hemorrhage' also bring back
nostalgic Slayer feelings but also remind me in parts of Warbringer and Co. and are definitely the best tracks on the album. 'Blood Ribbon' is a cool banger that starts with galloping drums and also unleashes a true riff storm. Cool and rousing!!!

Enforced have written one of the thrash highlights of the year with Kill Grid and I'm curious who can still surpass this high bar.