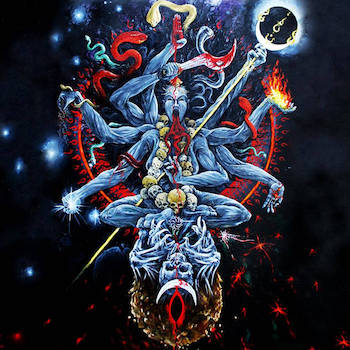 Some bands are just good, others have a special aura. Cult of Fire fall under the second category. Their form of black metal has ingredients of the Far East and this gives the music an occult character. Ascetic Meditation of Death does not open the next chapter. In terms of style, it is well aligned with the fantastic debut. Mantra-like sections and unleashed outbreaks shape an album that does not lack musicality, technical competence and harshness. Cult of Fire’s music is demanding and far away from fast food black metal. The songs do not follow conventional patterns, but they are always competently arranged. In their best moments, they offer an enormous depth which wants to be discovered under many layers of wildly raging guitar leads and expressive harmonies. The keyboards deliver some horror movie elements, but do not think of cheap effects. The Czech troop has a knack for spiritual sounds and so the dudes create music with certain sustainability.

Doubtlessly, this is not the heaviest black metal album of all times. The band allows itself to present a couple of slow, more or less solemn melodies. But the diabolic voice of the lead vocalist alone guarantees a more than sufficient malignancy, at least if we forget the two instrumentals momentarily. Spiced up with a proper portion of technical support, he sounds like a merciless God – voluminous, echoing and sardonic. But don’t get me wrong, the instrumental parts are mostly based on a profound heaviness as well. From time to time, the compositions fall victim to an overly ritualistic approach, but mainly they focus on the flow of the respective song. However, the song-writing does not always hit the bull’s eye and that’s a pity in view of the outstanding abilities of the formation. The closer, for instance, starts promising, but turns out into a pretty meaningless piece with a shallow melody. The intro of the opener, to give another example, builds up tension, but the song itself is not that enthralling.

Not least because of the involvement of two members of Cult of Fire in Death Karma, this equally mystic horde comes to my mind when thinking of comparable bands. Malokarpatan is also not too far away… there must be a special gas or flavor in the Czechoslovakian air. So, one thing should be clear, this is no average kind of metal. The artists do not deal with death as the ultimate pain or horror. Instead, the aura of the music gives the audience the feeling that death is nothing but an integral element of an enlightened yet tradition-loving society. Either way, I don’t intend to over-emphasize academic aspects. Ascetic Meditation of Death is a good album which profits from a warm and mighty production and it reaches a remarkable degree of fury every now and then (check out the third or fifth track, for example). On the other hand, the number of minor mistakes concerning the song-writing lowers its musical strength. After seven years without a new full-length, it could be time to show us that they can do a better job. 2020 has just begun.