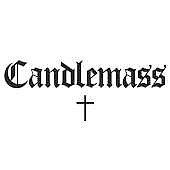 Buy on: Bandcamp
Type: Full-Length
Release Date: May 2nd, 2005
Label: Nuclear Blast
Genre: Doom, Heavy
1 Black Dwarf
2 Seven Silver Keys
3 Assassin Of The Light
4 Copernicus
5 The Man Who Fell From The Sky
6 Witches
7 Born In A Tank
8 Spellbreaker
9 The Day And The Night
MetalBite on YouTube

Usually, I associate heavy metal with volume and aggression, harshness and velocity. These are the features why I like this music. Doom metal has its right of existence, no doubt about it. It just does not belong to my favourite styles. The discovery of slowness does not make my day. It is a rather boring matter, at least in my view. Yet there is no rule without exceptions and the doom genre does not leave me completely cold. That's the point where Candlemass comes into play. Their albums never fell below a solid level. Even rather crude outputs like Dactylis Glomerata or From the 13th Sun have their moments. However, the masterpiece of the Swedish legend is definitely their self-titled full-length. Their first albums may have gained cult status in the eyes of some beholders, but the musical content of Candlemass is more or less unbeatable, among other things because of the vocals. This is where Messiah Marcolin comes in. His full voice creates dramatic, aggressive and desperate moments, depending on the needs of the respective song. Maybe he is an eccentric and insufferable egomaniac, but his vocals on Candlemass leave nothing to be desired. Too bad that this full-length became the farewell performance of this charismatic monk at the microphone.

Because of being no expert for this genre, I am unsure whether the album delivers pure doom. Some melody lines have a certain pop appeal. I suspect that real doom metal fans may have problems getting used to the presented approach here. Candlemass do not eschew to perform relatively cheesy lines (for example, the soft chorus of 'Seven Silver Keys') and they are thankfully not totally immune against comparatively fast rhythms ('Black Dwarf' and 'Born in a Tank'). But the band also scores with heavyweight riffs and ironclad harmonies that benefit from the warm and vigorous production. Highlights such as 'Assassins of the Light' and 'Copernicus' have to be mentioned in this context. However, the crucial thing is that almost every single piece deserves the highest praise due to the maturity of the song-writing. Mastermind Leif Edlund has composed songs that lie in very close proximity to perfection. The overdose of epic, elegiac and woeful riffs is admirable. Even the relatively brief instrumental 'The Man Who Fell from the Sky' impresses me. It is actually a very simple number, but it's stoic yet merciless riffs have a huge impact. The strong and metallic sound makes sure that the guitar work does not fail to have the desired effect. The riffs generate an unreal atmosphere so that the falling man is taking shape before the inner eye of the listener.

Unfortunately, the stylishly packed album narrowly misses the full score. 'Witches' cannot be blamed as a letdown, but it tastes like a slightly stale Swedish light beer. Ironically, another minor flaw is the bonus track. When does mankind get rid of so-called bonus tracks that cannot compete with the regular songs? The here presented last number contains some good basic ideas, but not only due to its sudden ending, it leaves a semi-finished impression. Its noticeable lack of substance cannot be kept hidden. My enthusiasm for these two songs has therefore waned over the years. However, the mediocre pieces only represent a pitiful minority. Candlemass has become engraved in my mind as a poignant album that shines with both the necessary variance and the emotional force. A lot of its songs rest safely at the highest tier of doom and no change is in sight.

A self-titled album can mean many things. Most commonly it's the first album released by a band - the statement is "This is who we are, this is our band, and this is the art we want to make." So for Candlemass to release theirs 20 years into their career with a cover void of anything but their logo, and to do so after a long spell of questionable releases which left many thinking the band had lost their identity - it's bold to say the least. But as a single listen to the album proves, that confidence was more than justified, and this re-emergence from slumber would see a revitalised Candlemass firing on all cylinders, determined to reclaim their place at the top of the epic doom world.

The Swedes in effect present us with a more focused, stripped-back version of their distinct sound. The focal point has clearly shifted; the mystical melodies and soaring vocal lines from albums like Nightfall are still there in some capacity, but they've taken a backseat to the crushingly heavy riffing. Mappe Björkman's rhythm guitar work is more potent than ever, giving rise to monolithic, overwhelming soundscapes, illustrated especially well in the instrumental interlude - as weird as it feels to be saying this about Candlemass of all bands and not some obscure Finnish funeral doom act, 'The Man Who Fell From the Sky' is actually in contention for the heaviest song I've ever heard. With all that being said though, Johansson's leads have their role to play as well - his prints are heard all over the album in the form of sudden bursts of solo that come in to ease the tension.

Speaking of focus shifts, you can also say goodbye to the immersive high-fantasy lyrics of albums like Tales of Creation - Candlemass' self-titled is a gritty, down-to-earth affair, the only retained theme from albums past being the Christianity denoted by the cover. Lyrically, it deals with the clash between the whimsical stories we tell and our cold, harsh reality and the contrast is very well-expressed through the vocals. Candlemass have seen a lot of different people take up the mantle as their singer over the years, but Messiah Marcolin towers above all the rest. His voice here rivals his performance on Nightfall in sheer power, delivering some of the most memorable lines in all of doom metal on songs like 'Copernicus' ("The sky is full of shining crosses for our sins...") and 'Witches' ("You know it's time to scream now and leave this fucking place").

There is a complaint or two I can level against the album, however. First off, the band plays it way too safe in terms of song structures and composition. Practically every single song is born from a blueprint of "riff-verse-chorus-solo-verse-chorus", which doesn't mar the quality of the album, but it does give that nagging sense of wasted potential. I would've loved to hear a 'Well of Souls'-esque bridge to slow things down and amplify the 'epic' in epic doom, but only 'Copernicus', the album's best song, comes close to achieving that effect.

My other complaint is that while most songs on here boast undeniable quality and passion, there's two which are below standard. 'Born in a Tank' tries to be a more aggressive, gritty piece akin to the opener 'Black Dwarf', but it doesn't tread any new territory and ends up coming off as a lacklustre attempt to recapture the feeling. The other miss is 'The Day and the Night', which tries to be an epic closer but ends up overlong, repetitive and drawn-out, robbing the album of a lot of momentum at the very end. Had they cut out the filler and given us something a little more potent and concise, this would be the perfect Candlemass album. But even if not flawless, it's still incredible as it stands.

To conclude, Candlemass found their footing in a very different place to the ancient, grandiose landscapes of times past. Their self-titled album has the band's signature romantic, fantastical flair in places but overall is a much more gritty, down-to-earth affair. It was a new, bold direction to take but quality is nonetheless written all over the result, and my minor complaints do not change that.

Highlights: 'Copernicus', 'Witches', 'The Man Who Fell From the Sky', 'Seven Silver Keys'