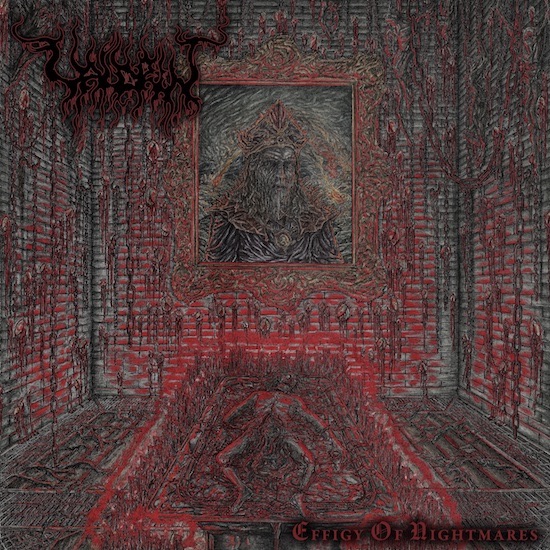 Not sure if I can accurately refer to Valdrin's 3rd album as avant-garde, perhaps on some levels you could consider it to be of that nature, but primarily, Effigy of Nightmares is melodic black metal at the core. Listen close enough and you'd pick-up on the Ancient (Norway) way they go about the album and on other instances Cradle of Filth and even Carach Angren make their way to the front row. Nonetheless, Effigy of Nightmares is a unique black metal experience so many bands attempt to offer but fail very early in their task to deliver anything close to it.

I had to inspect Valdrin's catalogue and what I found was quite interesting. First the band hail from Ohio (not a place relatively known for black metal of all things) and secondly, Effigy of Nightmares is Valdrin's 3rd full-length album which possesses considerably the shortest run-time of all their efforts. As trivial it may be, the band's name also sounds like some kind of medication for arthritis or sinuses, hence black metal was the last thing I was expecting to hear. Without delving into their earlier music, I thought heading in blindfolded would add to the experience of this new soon to be pleasure. And so, I did.

I got what I was looking for out of Effigy of Nightmares on the very first playthrough. However, I still felt as though something was missing. Don't get me wrong, when I reference the absence spoken of it's not on the band's side, rather on mine. See, while I could sit here and praise Effigy of Nightmares all I want, there's still one shortcoming on my end that somewhat truncated a piece of the real experience from the music. The way I see it, Effigy of Nightmares sounds as though it was meant to be experienced when hanging upside-down. Strange as it sounds, the music here is noticeably unorthodox the way some sections jump out at you and take a plunge into madness, so assuming the traditional seat in some comfortable couch just doesn't appear gratifying or justifiable to the record.

Songs like 'Exsanguination Tunnels' and 'Basilisk of Light' start out normal, yet with time you begin to notice small increments of strange behavior. Not necessarily the instrumentation itself, rather the way it's all introduced on Effigy of Nightmares. Like watching one of your relatives you've known for many years do something out of place in public and you’re left wondering what the unholy fuck just happened. And confronting them about it is a whole other story given how awkward the moment is.

The melodies go about their business without harm done but then there are parts in which the music seems to just for a short instance take a jab at something else, and it comes off as peculiar yet great at the same time. Like the rollercoaster of tempos on the final track aptly titled 'Down the Oubliette of Maelstrom'. The listener is being treated like some untrained witness to a magic trick's sleight of hand, while startled by the music's fluctuating momentum.

Folks, Effigy of Nightmares is the ideal title for something of this nature, those raspy mid throat screams and the swarm like riffing match like suit and tie. Then you've got the drumming that sounds as though it's being a puppet, unable to take control of itself at any time, it remains a slave to the rhythm of the guitars and bass.

Effigy of Nightmares has the runtime of an EP (compared to Valdrin's past work) but has a full length feel; 'Serpentine Bloodhalls', 'Gates of Hospice' and the manner in which 'Down The Oubliette of Maelstrom' ends somewhat gives it a real theatrical posture, adding a sense of cohesion to the music.

Anymore descriptions and I'd probably spoil the entire recording for you; it's all distinguishable sounds, but the way they move about raise the hairs on your skin, like the first-time seeing Linda Blair crawl down the stairs in The Exorcist. This is one for the vinyl, listen to it the way the band wants you to, ceremoniously.