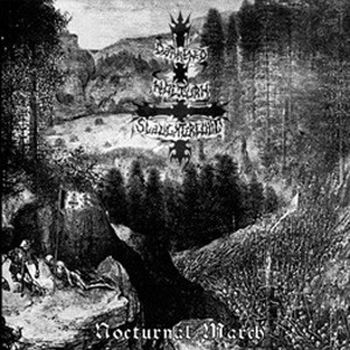 Black metal is like medicine. It must be bitter, otherwise it is ineffective. Darkened Nocturn Slaughtercult are no beginners and the first tones of Nocturnal March make clear that bitterness does not come off badly on their second full-length. Yet things even get better, DNS have fully understood the spirit of the shadowy genre. On the one hand, they trigger a hurricane of iron sounds. This is black metal the way it was meant to be, relentless, furious and martial. On the other hand, the band rules its self-made inferno. Things get never out of hand and the listener is not at risk to get lost in a chaotic noise. With that said, I am fine with the album's general direction and now let's have a look at the details.

I have read somewhere that Onielar is the "Black Metal Goddess", but neither I think that she gives herself this name nor does she sound like a Goddess, because some of her male colleagues would be happy if they could create the same masculine vehemence. Well, she also does not sound like a God, because her throaty screaming does not reach the highest quality level. It's more or less the usual black metal style, but it is positive that she gives all that she has got. Her performance does not lack passion, although there remains room for improvement in terms of expressiveness. Be that as it may, there was actually no reason to put two instrumentals on the album. Especially in view of these superfluous sound collages that add no value to the output, the decision for the instrumentals remains questionable. Black metal can be vehement or atmospheric, but these cuts are just gaping holes of emptiness. The funeral bell in "The Dead Hate the Living" creates more atmosphere than these two total failures.

The regular tracks do not suffer from comparable defects. Massive guitar leads and stormy drums call for war and I would not be surprised if the band was thinking of albums such as "Opus Nocturne" or "Heaven Shall Burn..." while writing the tracks for this work. Despite the relatively high number of tempo changes, the songs have a natural flow and combine violence and musical skills in a good way. Whenever the band gives full speed, and this happens a lot of times, the music borders on insanity and it feels like a black metal catharsis. Their way of proceeding results in fanatic tracks like "Wicher za górami", "Chronicler of Chaos" and "Scaffold Salvation". The girl and the guys avoid repetitive structures, their highest velocity is only a mere stone's throw away from blast beats and no piece suffers from a lack of pressure. Unfortunately, there are no earworm parts that stick in the listener's mind for hours. However, we all know that you can't make an omelet without breaking some eggs and the very brutal form of black metal excludes catchiness in most cases.

Good music should be produced by competent people and Nocturnal March is equipped with an appropriate mix. The album sounds direct, fresh and aggressive. There is nothing that disturbs the overall impression and the same goes for each and every of the regular tracks. The meticulously designed title track, simultaneously the closer, crowns the output with its militaristic marching drum. Those who like maturely performed black metal in its pure form will like this album, even if they do not love medicine very much.