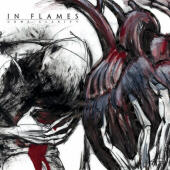 I liked this one from the first time I heard it. I knew that after the release of Clayman, In Flames was rearing towards these different styles/genres being that of melodic death/groove metal if you will. So, what's to be expected here is just different, it has its moments musically, it features heavy songs with screaming, but the style is more laid back, less aggressive than prior releases even though their guitars are still tuned down a lot to I think B or C, guitarists (current) would know what they tune to on here. It is definitely more aggressive than their latest.

Since the aggression is still somewhat there in the music, I'm not going to knock it down or off because it's not like they've been completely transformed (yet). The music is not too fast it's more keyed into this sort of concept they're trying to achieve with their nowadays tunes. But I wholly disagree with critics yet again because I think that the music is what made me like the album because IT IS different yet still heavy just not as intense as their earlier works such as The Jester Race, Whoracle, Colony and Clayman. The past is borrowed from and differentiated.

I enjoyed the guest female clean vocals, I think that it was right to do, to show this change as their music just transgresses into a thicker sound with melodic/groove laden styles which fits nicely into their discography, just not as well as I think Jesper would've agreed with. But he was on the album, so it wasn't like they totally gave up their established genre, they still come forth through to make good compositions and just diversify. I'm not justifying their wanting to change it up, I'm saying that it's just a sort of transgression to "happier" forms of metal.

This one is one I can listen to repeatedly and not get sick of because of its unique vibe. It's less dark as I pointed out, there are more clean vocals, slower musical tempos, not too many guitar solos, just good overall music to me at least. Other people can bash the album all they want and say they've totally sold out, but I don't think so. I think that they've just mellowed out and said basically that "we want to change things up as we're an older band and don't want to keep releasing the same stuff over and over". So yeah, they're into a whole different concept now.

Don't be swayed by naysayers spouting out things like "they're sell-outs", "their music sucks now", etc. Form your own conclusion because most of what they play on this album is a lot different than what they started with. A musical transformation. So, they really want to hold this concept and I think play what they want, even though Jesper their founding guitarist is no longer with the band. Their style is different, but the music on here is still good and quality. I'd think twice about what the common rating is overall and say try it on YouTube and then go with that. To me, they're still awesome and the music still is too!