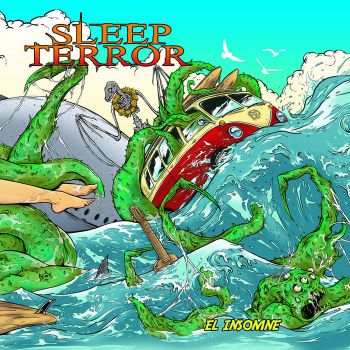 Out of all the fusion genre metal bands out there, Sleep Terror is pretty much my favorite. They've made some good albums when they started, but El Insomne is truly just something else.

This album has pretty much been dubbed as "Latin Surf Jazz Technical Death Metal". This features technical death metal with other genres too such as funk, acoustic, prog, and reggae. The way this album came out is outstanding, can't explain enough how insane the music on this album is. Every song starts out differently and always changes throughout the rest of the song. Some songs start out brutal, others soft, others right in the middle of the both. Ever heard a song that has some progressive surf funk and then suddenly turns into technical death metal? You most likely have not.

Literally every song is insane, and the listener is definitely unprepared for what they're about to listen to. The album starts off with a mid to fast-paced Latin acoustic guitar intro, and this is a very great way to start off an album like this. That intro alone perfectly emulates the feel for the rest of the album. Tech death with a big twist. After the intro, the first track starts off nice and smoothly. A funky latin surf section that would soon transform into brutal, crushing, (yet still surfy atmospheric) technical death metal. Then after that it turns into some funky stuff. Every genre on this album is just back and forth over and over. This is amazing. Bands like these know how to mix genres just the perfect way. Talented musicians have talented minds, and I can't even begin to process how long it took Luke to come up with stuff like this. This album is VERY mind-blowing.

Sleep Terror has mainly been a one-person band; Luke Jaeger on all instruments as well as providing programmed drums too. All his past work is great as well, but El Insomne is obviously this band's peak. On this record, legendary death metal drummer Lord Marco joined the band in order for Luke's music to sound purer by adding in some real drum tracks for the first time in the band's studio recording history. And his playing is amazing. The style of the drums sounds just like the drums on all the past albums; fast and furious, very technical and organized indeed. Luke is the composer of all the music on this album, with Marco coming in to provide the drums tracks. Both men on this record are insanely skilled in every way possible. This is the album that no one asked for but was very much needed. Who knew Sleep Terror would put out such a complex and insane album like this after the release of Unihemispheria? Wow!

This is one of the greatest releases of 2018, and if you like technical death metal, I HIGHLY HIGHLY suggest you go and listen to this right now. This album will blow your mind and begin to make you think "What the hell?? How could a band make such great music like this?!?!" I swear to you, you will not waste a single second with this listen.