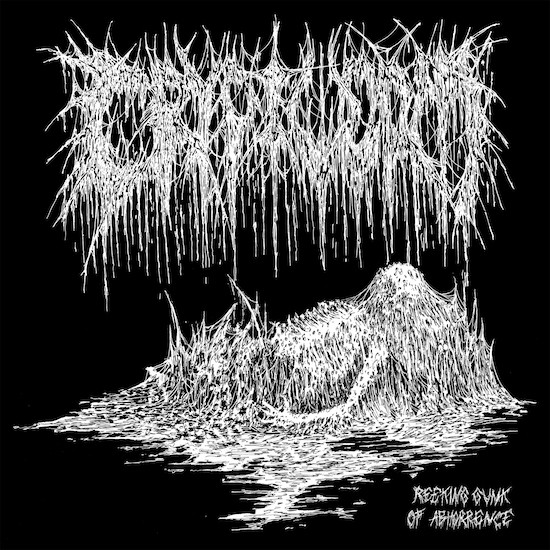 Cryptworm like the name would imply, has taken some time to get where they're are now as a band, though foreseeable it may be the time and effort sacrificed to arrive at this junction, the slug is here, nonetheless. Due out on Me Saco Un Ojo, is the band's latest EP that stomps through slushy swamps of sickness, Reeking Gunk of Abhorrence. If you're new to bands like Hyperdontia, Cerebral Rot, Undergang and even Ulcerot, then you have much catching up to do, because here in the death metal underbelly, things move rather fast, making it easy to get left behind.

It’s the mud they like, and often attributed to mud are its sluggish and dirty properties, which you will find to be the sonic recurrence on Reeking Gunk of Abhorrence. Offering a short yet satiating collection of 4 messy meals, Cryptworm stir-up a nasty sapropel of deep gutturals, sloppy drumming as if the sticks were covered in slime; and a drunken regurgitated goo of guitar riffs. Appearing to be within the puss-filled parameters of Hyperdontia and Undergang, opening track 'Festering Maggot Infestation' arrives with a most diabolical canker of deformation, ripe with a nauseating stench of old school death metal, Cryptworm vouch the helminth is very much alive, active and even more hazardous to any living organism than before.

Title-track 'Reeking Gunk of Abhorrence' maintains the catchy yet filthy contour that prevailed over their debut EP Verminosis and here it's no different, though I would say the production appears slightly more definitive to unearth and sustain the material's effect. Some sections of the music such as on 'Festering Maggot Infestation' and 'Cesspool of Perpetual Decay' have a head-bashing, fist-pumping, waist-swinging, up roaring type of groove to it that keeps the music moving, so you know its 20-minute run feels even shorter. If you love the deep, stomachy vocals like what you'd hear on a Demilich or Undergang, then Reeking Gunk of Putrefaction has you covered in venomous disgorge; get swallowed!

Since sprouting from an infected sore somewhere in the United Kingdom, Cryptworm's sound and aesthetic without doubt was that region's answer to the American underground of death metal. What other sphacelated things the band holds are yet to be revealed.