The diabolical and disturbed duo of Tibor and Joe slither their way from the catacombs to reignite the stench of Cryptworm with their latest EP "Reeking Gunk of Abhorrence". It's been a while and the thirst among fans for the sour seepage Cryptworm are known to harbor has increased tremendously. Fortunately, the band has arrived in-time to satiate the longing with 4 sickening fluids, all of which contain the necessary indecencies to fulfil the gore-soaked fetishes of the underground. Having been set back by the shitstorm of events, the band took the time to answer MetalBite's questions about the album and things of relative nature. 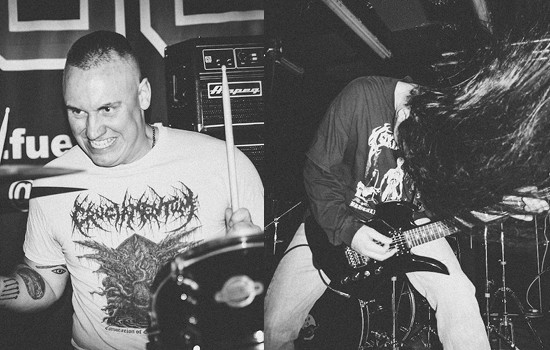 "Reeking Gunk of Abhorrence" comes out on June 20th through Me Saco Un Ojo Records; how is Cryptworm feeling about that and generally?

Joe: Well, whether or not it will be released then with this Coronavirus crap going on is questionable, but regardless, I am psyched for it. It's been a brilliant experience writing these songs, recording them and playing them live so I just can't wait to have these songs on a physical format that I can hold in my hands.

Tibor: I'm super excited about our newest release because we put a lot of effort writing these songs and also, we got the perfect labels for the job! Me Saco Un Ojo releases it on 12" vinyl in Europe, Pulverised on CD in Asia and a new label called Life After Death on cassette in the USA.

Who came up with the name Cryptworm and does it have any sort of deep meaning behind it?

Tibor: I came up with the name way before we even formed the band. I have a list of possible band names and that was the one that I liked to most at the time and we agreed with Joe to use it because it fits to our music. There is no deep meaning behind of it at all. I think it just sounds cool and perfectly describes our sound. I mean you wouldn't expect anything just foul putrid death metal with a name like that.

How is the band managing with the current pandemic, and how has it impacted where you live and plans for Cryptworm?

Joe: We haven't rehearsed in over a month and we've already had booked shows cancelled. We were planning to start recording our full length around this time and that's obviously not happening. It's slowed us down, but it really isn't the end of the world, just a massive inconvenience.

Tibor: We didn't have any shows planned in the first half of the year because we wanted to focus on the debut full length so it didn't affect our live shows that much yet, only a few shows got cancelled so far but I'm afraid that there will be more. What's more frustrating that we wanted to record our debut full length in May but we can't rehearse right now because of the pandemic so it's going to be postponed just like the release of our upcoming MLP which supposed to be out on May 2nd but the record factory is closed at the moment so we don't know when it's going to be released.

I love the sound of the new EP "Reeking Gunk of Abhorrence", it's kind of punchy but still somewhat jagged around the edges. The vocals are just ugly, the drumming is in your face and the guitar licks are vile; who mixed, mastered and recorded the album?

Tibor: Thanks man! We have a studio room in the building where we rehearse, and we recorded the drums there like always and then I recorded everything else at home by myself. I started to build a little home studio a year ago so I can record everything apart from the drums. I have a good friend of mine in Hungary called Árpád Szenti. We tried him out on the split with Archaic Tomb and we liked the end result, so we asked him again to do the same exact thing. We'll probably ask him to mix and master the full length too once it's recorded.

What is the recording line up for "Reeking Gunk of Abhorrence"?

Joe: The same as for every release so far which is Tibor Hanyi on guitar/bass/vocals and Joe Knight on drums.

Who created the sick cover art?

Tibor: All the illustrations including the borders, titles and the logo are done by a really talented Indonesian guy called Festering Phlegm. His monochrome art is perfectly fitting to us and to other revolting death metal acts. He works pretty fast too for reasonable price so if you need some sick death metal art, I can't recommend him enough!

How significant is the new EP to Cryptworm as a band?

Joe: It's a new milestone for us. It presents our sound perfectly and will be a fist in the face to all our new listeners. It shows how far we've come in the six years we've been playing together and couldn't ask for better labels to be involved.

Is the EP merely a warm-up for a full length and when can we expect to see one?

Joe: Not intentionally but you could say that. If you like this MLP then you will get crushed by what we have written for the upcoming full-length. Prepare yourself!

Tibor: We can call it a warm-up for the full length which is going to include 8 songs over 35 minutes in the same disgusting style just the MLP. It's already written and ready to record but as I mentioned before we planned to record it in May, but we have to postpone it because of the virus. Hopefully we'll be able to record it within the summer and then it will be out sometime next year.

In what ways was recording "Reeking Gunk of Abhorrence" different compared to past efforts?

Joe: Our sound is slightly different from the first two releases as this is just pure filth. You'll hear from our side of the split with Archaic Tomb where we were starting to go, and even though you can hear it's the same band, our sound was regressing somewhat (in a good way!). We still have the intense blasts, d-beats and dirty riffs as in the previous style, just a sound that gives it more justice.

Tibor: We always record the drums in our rehearsal place which also has a studio part and then I record everything else at home. We mainly changed our sound on our third release the split with Archaic Tomb where I started to use a different guitar sound and vocal style. We continued on this direction with our new MLP and basically the split song easily could fit on this 12".

Are the songs on "Reeking Gunk of Abhorrence" linked to any personal experiences or does a story/s precede them; or are they just a compilation of twisted ideas?

Tibor: They are just my twisted imaginations. On the first 2 releases I actually got influenced by different torture and execution methods and tried to describe them in a grotesque way but this time I'm just trying to come up with lyrics of morbid ideas of death and putrefaction as disgusting and foul as our music.

Are there any plans to add other themes to the music, such as Science Fiction or something of the sort?

Tibor: I love sci-fi themes but it's probably not going to happen. We plan to stick with our current putrid theme because it fits our music perfectly.

I take it since both members are so busy with many other bands (Tyrant Goatgaldrakona being my favourite) the new Cryptworm EP took some time to create?

Joe: All our other bands are studio projects, so they don't get in the way of Cryptworm much at all.

Tibor: As Joe said all of our other projects are pretty much just studio projects at the moment. I quit from all of my active bands like Mörbid Carnage, Necrosodomy and Gravecrusher when I moved to the UK. I'm still in Coffinborn and Tyrant Goatgaldrakona with my friend Lambert. We plan to record full length albums with both of the bands but at the moment we are focused on our newest project Rothadásbut these recording sessions won't be in the way of Cryptworm at all.

Joe: It was a really slow start as Tibor has only just moved England and he had to put his main focus on getting a job and other more important necessities, and as for me it was the first time playing in a band for a while so my drumming skills were not up to scratch. Our rehearsals were really infrequent and spontaneous, and we would go months at a time without rehearsing. It wasn't until around mid-2016 when we started to really knuckle down and rewrote our material from scratch and got together the songs for our first demo which was recorded later that year.

Cryptworm has been a duo for quite some time now; however, are there any plans to add a third member to the band?

Joe: We have talked about it in the past but ultimately, it's so much easier doing things the way we have which is to just get a live bassist in for when we play live. A full-time third member is really not needed right now but I guess if we find someone who really would fill the gap perfectly then it could be a possibility.

The first time I heard the band, I initially thought of it as being American, only to find out Cryptworm hails from the United Kingdom, what bands from the USA helped in the molding of your sound.

Tibor: There are loads of bands that we like from the states. It's really crazy what's going on there right now. If I would have to do a list of bands, I like the list would be endless. I think Cryptworm is right now a grotesque mutation of Mortician and Demilich but newer bands from USA like Fetid, Cerebral Rot and Mephitic Corpse also make a huge impact on my riffs.

What are some of your likes and dislikes about the current underground scene?

Joe: The fact that people have it too easy with all these streaming sites and it seems that physical formats are just used as a means to show off on social media. As the years go by I feel less and less at home with the metal world, but I guess I'm just getting old.

Tibor: I think the underground scene is really strong right now. Loads of great bands, labels, fests, tours, fanzines, webzines and of course fanatics who support all of these! I can't complain at all! 15 years ago, we didn't have all of this especially in the death metal scene. Personally, I really enjoy the current scene and I'm glad that I could be the part of it!

Thanks for doing this interview with MetalBite. Give us that full-length album! Please have the last say.

Joe: Thanks for the support. All being well there will be a full-length in 2021.

Tibor: Thank you MetalBite for the opportunity! I already started writing the second full length so don't worry you will hear a lot of putrid abomination from us in the next couple of years! Thanks to everyone who read this interview or supported us through the years!