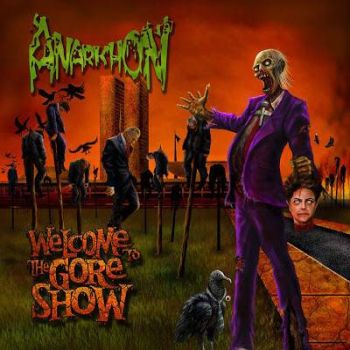 There is an idiomatic expression that says 'straight from the horse´s mouth' which means to take something directly from the main source or get something from the primal source. Well, I think the guys from Anarkhon took this term very seriously and literally when recording their 2013 album Welcome to the Gore Show. We can even modify the idiom and change it for “straight from the corpse's mouth”.

One thing is to worship the sound of a band that let a profound mark in a musician's influence to play an instrument. For instance, many bands say their sound is influenced by x or y band but at the end is just a marketing or a bad ass reference, 90 % of bands and record labels (at least in metal scene) do that. To say that you sound like Morbid Angel, Obituary, Entombed or Venom is part of selling your product to the public but to really sound like one of those bands is another story. Take Cannabis Corpse as an example. They do worship CC but in a more parodical way in which elements are taken from the source but transformed and legitimized with their own talent and humor. So, back to my argument again, one thing is to say you sound like and another different thing is to actually do. And one thing is to worship a sound and something abysmally different is to copy directly or plagiarize.

In Anarkhon case is that they copy directly from many song structures of Cannibal Corpse around the Gallery of Suicide / Bloodthirst era and that fact make this album a very amusing but repetitive listen. I am not writing this review from a CC fan boy perspective that is angry because my favorite band is being copied, not at all. I'm just being critical and I like to praise bands that deserve it for their talent but whenever I see lack of passion or originality it has to be said. Thus, I am not going track by track in this review, it would be a futile exercise. Instead, I will mention different aspects that make this album a copycat.

Starting with the guitar tone and riffs which are taken directly from the CC records mentioned above. The most extreme cases of this type of plagiarism, sorry, I mean worship are 'Grotesque Disfigurement of Human Bodies' and 'For God your soul…For Zombies your Flesh' (by the way, this title track is suspiciously similar to the one of Pungent Stench in their first full length). Anyways, to continue, I would say that Anarkhon does not have the musicianship and skills to copy the fast and relentless songs from CC but instead they go for the comfort zone of replicating the most infectiously slow and muddy ones. In some cases, the songs vary from mid paced sections to sudden bursts of violence that kind of entertain but as an average death metal act. Finally, let's talk about the lyrics. In this regard, I will have to point out that the fact you have your thesaurus at hand with weird medical words does not mean that your lyrics are bad ass. For example, in the track 'Rotten Flesh Reanimated' you can find words like “prognosis” and “leptospirosis” but they don't really have a purpose more that make this record look rotten and bad ass. There is a lot of intention in this record but no more than that, they got short of ideas; it seems menacing, but it is really not.

Nonetheless, there are some positive points I have to give to welcome to the gore show. I like the social criticism approach that the self title song gives to the corrupted political class in Brazil (by the way, this band hails from Brazil) and I think instead of taking the obvious gory path in the lyrics, it would have been more interesting to take a political/social focus. Talking about the music, I really dug the solos in the songs 'Corporal Sores' and 'Regurgitating Maggots'. Those were well developed; I wonder why the band did not replicate that kind of structure instead of over-worshipping CC over and over again.

To finish, I would like to emphasize that I like CC but I am not an angry fanboy that is regurgitating venom in this review just because. On the contrary, not everything is bad about this album, what I did not like about it was the easy way Anarkhon took. Instead of going for something more socially aware and less “similar” to CC in terms of musical structures and lyrics. Critics have to be constructive and not only throw shit, I think, the musician are capable of creating something more of their own for the next recording and sure they can. It’s just a matter of keep working, jamming and listening to music (but not only Cannibal Corpse).