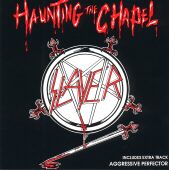 I confess and beg for mercy. The shame is on me. Anyway, I feel the need to make my sin public. Here it is: I never understood why so many maniacs worship this release so intensely. My problem is the B side of the vinyl. Nevertheless, let's start with the first track, the monumental 'Chemical Warfare'. Honestly speaking, this is the only song which can challenge the tunes of the debut, at least in my humble opinion.

This does not mean that it follows a comparable approach. Quite the opposite. From today's perspective, 'Chemical Warfare' appears as a harbinger of the pieces of Hell Awaits. More complex than each and every song of Show No Mercy, it rushes over the battlefields which is littered with thousands of dead bodies. Of course, the debut's element of surprise is not reproducible. Slayer's ravenous appetite for extreme metal is already well known. However, the group does not lack of enthusiasm and combativeness. The violent approach of Huntington Park's loudest newcomers is authentic. Tom Araya's vocal performance delivers satanic vibes in abundance, Dave Lombardo is anything but lazy while torturing his drum kit and the famous guitar duo avoids any kind of redundant gimmicks. In a nutshell, 'Chemical Warfare' is a sonic nightmare of the most pleasant kind and tastes definitely better than, for example, mustard gas. Okay, this might be a matter of course. But it is also nothing new that hip hop and rap suck. Nevertheless, I remind my friends of this self-evident fact from time to time.

Yet Slayer are not able to hold the level. The noisy solos of the two further tracks of the vinyl lack of inspiration, while the comparatively unspectacular verses and the average choruses leave a rather vapid aftertaste. I am realistic enough to say that the best early thrash full-lengths originated from the United States of America. But I am also patriotic enough to declare that the best early thrash EP was produced in Germany, even if I do not know its name. ("Flag Of Hate" or "Sodomy And Lust"? Decide for yourself.) With that said, I want to emphasize that my expectations were extremely high after Show No Mercy. In other words, 'Captor Of Sin' and the title track were neither powerless nor ill-defined. Yet totally mind-blowing elements like the riff of 'The Antichrist' or the mid-part of 'Die By The Sword' (remember the unbeatable "Watch as flowers decay"-sequence) did not show up. And, by the way, the slightly dull sound also did not fully convince.

Only for the sake of completeness, I mention the CD bonus track 'Aggressive Perfector'. In terms of quality, this one-size-fits-all bonus (among other things, it appears on the European version of Show No Mercy, the Postmortem EP and the here presented EP) lies exactly between the A side and the B side of the vinyl. Nevertheless, it is not the most original bonus. Thus, as a little act of revenge, here comes my one-rating-fits-all: 8, regardless of the format.