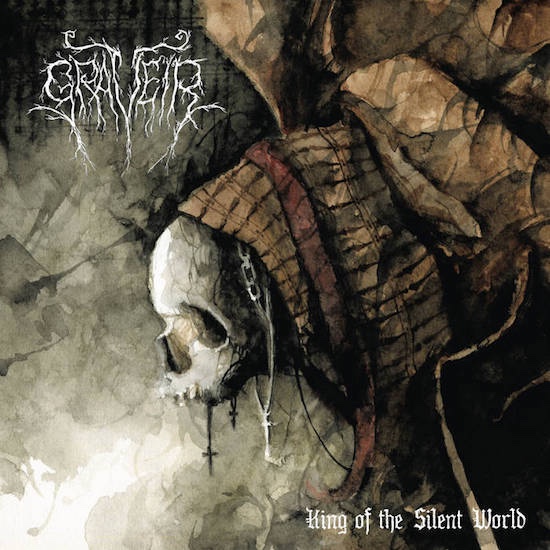 Black metal is no stranger to depressive and melancholic music, some of the most well-known and even acclaimed acts in the subgenre are bands whose music focuses on morose and somber melodies with equally sorrowful lyrics to balance the inherent aggression of black metal. And one such band today is Graveir from Australia.

The band is now on their sophomore record and like other bands they saw fit to be both more ambitious with their music while also refining the sound previously displayed in their debut album and subsequent in-between EP and split. Graveir do an excellent job of maintaining the aggression through their riffs and overall performances, the music still retains a menacing and ominous atmosphere from the previous LP, but the band truly shine in how they mixed things up. The compositions in the music are much more dynamic, dare I even say have some elements of progressive rock and even a symphonic like flair, however what’s truly impressive is how Graveir take that unorthodox approach to their songwriting and perfectly blend it into black metal. While the overall music is very melody driven, with a focus on riffing, the end result is a style of sorrowful black metal that oozes the feeling of despair and anguish, it’s also remarkably more aggressive and savage than other black metal bands that are pedantically labeled “depressive suicidal” or “atmospheric” black metal. Songs like 'Bathed in Acheron' and 'Immacolata' is where the anguished feel of the music shines, the mid-tempo drums and droning guitars paint a distinct picture of utter desperation. It’s somewhat reminiscent of the atmosphere in Mgła’s music in the sense that the focus is building momentum to a crescendo instead of keeping the momentum for a single cathartic burst.

Furthermore, the band still manages to display pure black metal but with interesting twists peppered throughout. The opening track 'Charnel Bacchanalia' opens the album with the same “wall of sound” style guitars but with a swaggering rock and roll style groove in the drums and bass, which then leaves room for the guitars to be the backbone of the song, meaning that the vocals and drumming take center stage. And this same out of the box and wild experimenting is present throughout the record, this quintet manages to have uniform and devoted performances while also letting each individual member flex and shine in key moments without feeling like a guitar solo, or a drum fill, or the vocals are upstaging the rest of the instruments. The album is also perfectly paced, each song leads into the next which then builds from where the previous track left off, a song may be short and aggressive and is then followed by a much more melodic and atmospheric driven song and it never feels like an abrupt change of pace. Despite a long runtime of under an hour the way the album flows and how captivatingly hypnotic the music is make it an immersive and constant experience, an hour may go by but you won’t feel it.

Finally, there’s the production of the album, which can be a bit too polished for many of the faithful of black metal while also being too grimy for the unfaithful and this is where Graveir make good use of that middle ground. Given how unorthodox their music is from a black metal perspective, the “prog-rock-like” production brings put the best elements of their music, but they don’t go far enough where the album is devoid of grittiness, when it comes to black metal a raw performance is indispensable. Although, one thing I have to criticize is that while Graveir have successfully expanded and broaden their sound, they still have a long ways to go to make a perfect album, as two tracks in the halfway point are slightly weaker than the first and last half of the album, it’s not filler by any means but the tracks 'In Remnant Light' and 'Fodder for the Gears' while being really good songs on their own are not as memorable and remarkable as the rest of the songs, but make no mistake, two solid B tracks out of ten A+ tracks is still no mean feat.