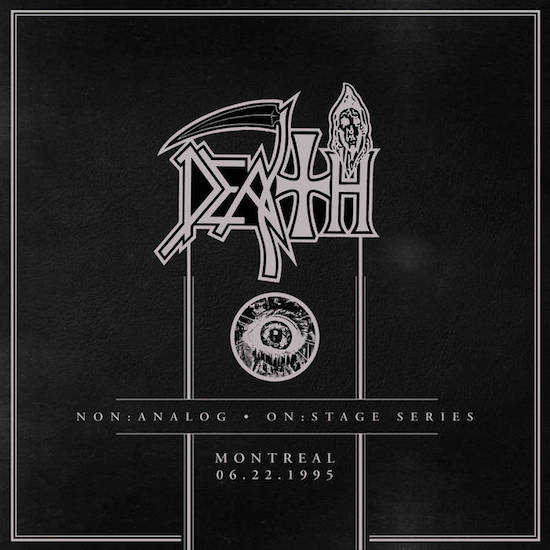 Here I attempt to handle the mixed emotions part of the music business that invariably comes into play for me. Relapse Records has issued a streaming Death show from Montreal from June 22, 1995, part of a series the label is doing. I'm all for Death getting some old and unreleased recordings out there, but at the same time the quality of both the recording and the material should be up to Chuck Schuldiner's standards, dead or not. This particular gig is the first offering from Relapse in what is called the Non-Analog – On Stage Series, providing some lost gems to the fan base that is chomping at the bit for more Death material to surface.

So I'm listening to the stream of this gig, a show I may very well have had on some battered cassette tape many years ago, and I'm digging the rawness of the recording. Now, to be clear, I'm sure people are going to bitch and moan about the quality of the recording; this show was probably never meant for distribution or to rival the store-bought material; yes, the sound is "less than ideal" by analog standards, but it's a very quality recording in and of itself. For what amounted to a "bootleg" recording, and I've heard literally thousands in my lifetime, it's a pretty damn cool and tangible glance into the energy and ferocity of a typical Death show back in the day. I was lucky enough to have seen the band more than a dozen times from 1987 to 1998, and I can't recall a bad or "phoned-in" gig. Chuck and crew always gave their all, occasional mistakes and mishaps abound, and I never left feeling I missed something.

What is really nice about a special offering like this, these oft-covertly-or-band-taped gems, is the lack of polish slapped over it. In short, you can hear the systematic brutality of a live Death performance without all of the nuances usually applied with careful and steady hands to "embellish" or "enhance" the sound. I think we all understand that no live album is actually a totally live piece, no matter what Eddie Trunk might opine to the contrary, but a special show like this has all of the velocity and energy of a live gig showcased precisely as it was meant to be heard: raw, dirty, loud, and intense. The unaltered crowd applause and howling between songs is so enthusiastic and genuine that I got goose bumps hearing such magnificent excitement. Even the sparse moments of source tape warble or drop-out is so nostalgic-waxing for me that I feel like I'm back in a familiar area of my youth again. I have to think Chuck would approve.

As for the band's performance overall, I hear the occasional mistake or blunder, and that's the beauty of the recording. I hate hearing a supposed live record only to have so much overdubbing and cuts-and-paste that it ruins and sterilizes an otherwise class recording (ala Tribute or Unleashed in the East). I suppose that was what drew me to the tape-trading underground so early, the vast desire to hear things in their naked, purest forms. The Symbolic tour was a rager in every way (a tour I caught up in Madison, Wisconsin with a friend), and Montreal had a strong and exuberant show in front of them. The band tore through anthems like 'Pull the Plug', 'The Philosopher', 'Jealousy', 'Suicide Machine', and '1,000 Eyes', to name a few. I hope these see physical releases on CD and vinyl, as I'm sure they'd be eaten up rather quickly. The performance of 'Jealousy' was so damn potent and brutal that I honestly felt like I was back in the Paramount Hall for brief moments throughout; if you were lucky enough to witness Death in all of its glory, you saw something very special and as honest as it came. During 'Lack of Comprehension', just listen to one girl's reactions from the audience as the band flies through the song – what the hell else is needed to feel the energy from that room?

I've a feeling this series of shows the label plans to release over time will both sustain and delight hardcore fans of death metal and Death in general. Once you can get past the "imperfect" source material and hear the gig exactly as it was performed that night, note for important note, you'll no doubt come away with one hell of an understanding of what a live Death show was like within its own sphere of energetic design. It was tribal-like ritual not everyone will understand, and that's okay – it's our music, anyway.

Check the link on YouTube or on the official Relapse Records channel, and if these become available for purchase, be sure to support the product!