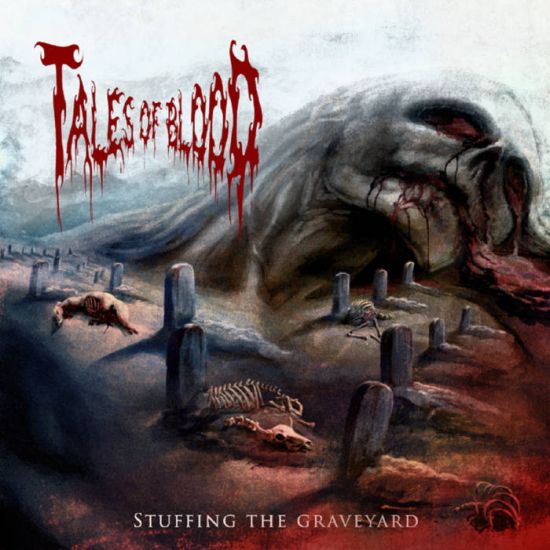 Listening to Tales of Blood made me go on a trip towards 90s nostalgia death metal on one part, with influences from bands such as Torture Killer, Six Feet Under, Cannibal Corpse, Entombed, and old school death metal in general.

Stuffing the Graveyard (the band's first LP) has a great start, structurally thrives till the third song, where goes slower towards the middle and more experimental towards the end. It has some filler and unnecessary elements such as the last track of the album, which the band uses as the start for its concerts. The composition of the album sounds competent, energetic and catchy. Listening to the album 10 times won't bother you, quite the opposite, this album has a high replay value in that sense, minus its filler on the track list. It has an excellent production, with the vocals on the right gain, audible drum set and bass and guitar with the right tone.

The album sounds great as a whole and starts with one of my best songs on the album, 'Dissect and Murder', an awesome entry that may start a bit generic but evolves rapidly into something else worth listening and paying attention to. The chorus is catchy lyric wise, and the drums have its own identity and energy; the way the beats are being put on the table are recognizable and makes a unique sound for this band, considering how the classic style has been repeated towards the years, but delivered perfectly in this case. An awesome follow-up with 'You Die Next', with the same tempo, something that is part of the formula of this band in most of its song, with constant double bass and groove (Entombedish), has some tempo changes and interludes very “death n' roll” on its sound. Also the vocals sound really similar or reminds in technique to Chris Barnes on "Butchered At Birth" and "The Bleeding" and also a mixture with Corpsegrinder's lows, minus the high vocals.

The variety on tempos with 'Vacant Slaughter Job' that has a more slowed down pace and shows the ability of the band to be creative in a simple way, and that the key in Tales of Blood is simplicity (and not over doing for the sake of it). It could maybe more varied with the double bass to create more even, unique fills specially in fast parts (as the slow parts obviously stops the double bass) like on 'Stuffing Streaming' which is another gem on this album. Really catchy and interesting how it thrives with awesome concert material potential but, follows up with the not so great 'Post Mortem Barbarity', a filler song, which is a bit uninteresting apart from the first riff which sounds pretty cool on the beginning and mid sections.

The sixth song 'Sadistic Force Feeding' is kept interesting thanks to the vocals that go along well and add lots of colors to it and also drummers creative fills and energetic performance. This is one of the few tracks with blast beats, which are delivered a bit sloppy on their output. One of the best songs in the album, in contrast with 'Severe Bend to Kill', a groovy, and catchy song, with good but, predictable changes (due to the number of bands playing the same style nowadays) that slows down in the right parts keeping the flow interesting. In my opinion, its best part is the chorus and could have been worked more on maybe a bit less overall simplicity and add some solos in between, or a more challenging element to make it more impressive but, its pretentious and fails to hit the right spot. It's a bit of a missed chorus but probably would do good in a concert as a filler to move people on the moshpit.

'Getting Dead' (my favorite song) is extremely simple, but with a good flow to it thanks to the vocals, and the brilliant rhythm guitars. The Cannibal Corpse influence is evident, tempos and everything, making it sound a bit like a homage to a classics from them, but still maintaining Tales of Blood identity and going back to its own formula. It also finishes slowly stopping instruments to play then fading making it a very atmospheric finish. 'Pregnant and Cut to Pieces' is another groovy song with simplicity in its structure. The rhythm guitars are potent, and the lead guitars fill with simple solos or melodies on top. The vocals are strong and lead the song, and stop with the groove when it should stop, to keep the song safe from being boring. It has a good and creative change on its flow even if it falls behind 'Getting Dead' as a song (it feels like a filler as a whole, but a good filler).

Finally, 'Mortuary Breath' (an instrumental outro), puts the curtains down or passes the credits with a background music in a death metal way with cool riffs on the rhythm guitars. It feels a bit like filler and I would skip this song as its boring. Maybe it would improve if it had more dramatic elements to it, or a more congruent composition as a whole (instead of filling the space of silence with cool riffs put together which sound more like a band exercise before rehearsing). Album concludes with 'Aux Chiottes', the eleventh track in the album which is a recording of a voice probably from a stock footage or film, which I can't comment on.

Lyric wise the album has the typical gore subject (in an old school way) mixed in between vegan subjects. The vocal arrangements are spot on anyway, making the songs dynamic and interesting.

As a conclusion I truly recommend listening this album for its good songs that are plenty, don't let those fillers scare you as they are short and pass soon. Some of it needs further exploring but overall I will come back to this album once in a while to listen its best songs. The album is a blast to hear and I am really happy to have discovered this band!

Stuffing The Graveyard is the first full-length album by the French death metal band Tales of Blood. The band draws a lot of influences from the more extreme bands of the early nineties (obviously Cannibal Corpse), but still does a decent job by not remaining too generic. An admirable trait of these guys is their organizing talent; there is no intro, which is a good thing in many cases, there are ten songs and each one lasts about three to four minutes with a tolerable outro.

You might know what genre this band is playing when you see their cover art from ten miles away, but even the slightest doubt disappears in the first seconds of the first track 'Dissect And Murder'. It's the typical sound of old school death metal, yet slightly raw. The riffs are pretty decent and definitely come from some experienced guitarists. Although the first three tracks are not too impressive and sloppy at some moments, the actual sound develops completely just before the middle. What caught my attention were some pretty catchy drumbeats on 'Post Mortem Barbarity', followed by very energetic riffs and a faster tempo. Another remarkable feature of this album is the transitions from the intros of the songs to the main part, which doesn't leave much room for doubts about the guitarists' abilities and fills the composition as a whole very well. Every now and then you can hear some groovy parts that can be associated with Obituary and riffs with an epic mood that prevents any monotonous repetition. Samuel Ou-Rabah's deep growling vocals were executed technically perfect and were absolutely consistent throughout the album. Considering that this is an underground act, it wouldn't have been surprising if the sound as a whole had been much rougher, but the quality of the vocals doesn't seem to have been greatly affected. The bass sound is made relatively loud and precise, but the lower end of the sound is partly lost due to the dominant guitars. Nevertheless, some bass lines were quite groovy and pleasant at certain points, like in 'Pregnant and Cut to Pieces'. The lyrics are based on the usual slasher horror themes with the intention to be as disgusting as possible, but in general, this is nothing new. As a passionate meat-eater, I found it difficult to read the texts about veganism; nevertheless, it's not bad that they encourage this relatively rational way of thinking.

All in all, this is a pretty decent album. It's obvious that the guys had several ideas which they implemented quite well on a technical level, but it's still pure death metal. For this album to be exceptional, they would have to focus on one single aspect. This way it's just a good death metal album with a lot of replay quality, but certainly not something revolutionary and definitely not my favorite.

If you pay attention to Tales of Blood group photo you can clearly see the logos of 3 of the band member’s t-shirts. All of them American bands (Autopsy, Derkéta and Demolition Hammer) and considering the band’s formation year (1993) is safe to assume their proposal dwells in the old school death metal ranks. Old Cannibal Corpse-like drumming, a bass that can be heard through the complete record, rotten riffs, always raw and evil. This album’s production is kind of harsh, I agree with the reviewer below about the rough in the edge’s analogy, but I also think it fits the music perfectly. The band’s performance in general is pretty decent and the songs themselves are original enough for such an exploited genre, which is also a big plus. The thrash influence in the mid-tempo riffs helps to that effect, giving variation in textures.

Tales of Blood actually hails from France, so even if American death metal is their primary influence you can’t say it’s an exact copy from X band from Florida or Y band from New York, in fact I feel more influence from exquisite brutal thrash bands like Demolition Hammer or Morbid Saint than the generic riffing. Some passages include groovy riffs in the vein of Dismember and that kind of Swedish death metal. Songs featured on Stuffing the Graveyard aren't particularly fast but still have a fair share of double bass in the slow parts and the tupa-tupa parts are built around that Asphyx death/doom beat that is fast and super heavy at the same time. There are some blast beats here and there, but they are rarely used. The cymbal work and fills are pretty basic, but it also fits the old school aesthetic.

Bass guitar features a slight distortion that helps it cut through the mix, I like it. Guitars are also heavily distorted but at the same time are ultra-thick, full body. The tuning is not that low but the guitars sound fucking huge, strings in general feature crude tones in congruence with the rough production. The vocals are low and guttural but not very deep, a more classic approach, still fit the music perfectly. I found the whole vegan death metal thing a little disturbing... I mean, vegan death metal? It’s just like christian black metal, it doesn’t make any sense and I’m taking some points for that. Finally, I would like to mention the lead guitars which are awesome for what they are just like the rest of the album, not extremely technical but always intriguing.